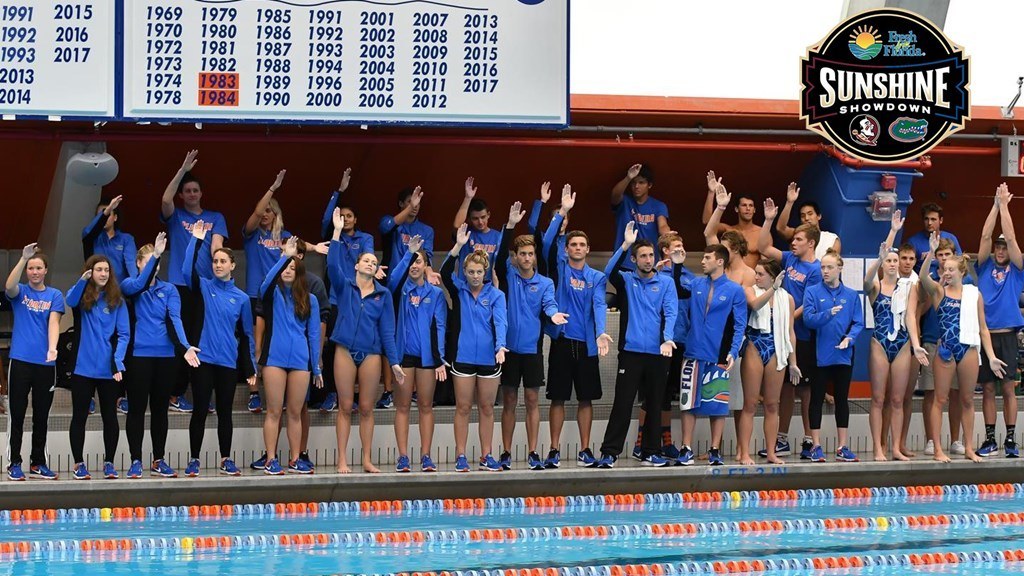 It's been a wild 12 months for the SEC, but after all of the dust settles, the Florida men (above) and Texas A&M women are projected to repeat as champions of the conference. Archive photo via Florida Athletics

While no meet that’s this close is over until it’s over, both the men’s and women’s meets at the 2019 SEC Swimming & Diving Championships were effectively decided in Saturday morning’s prelims.

In the men’s meet, Florida enters Saturday with an 8 point lead over Missouri. The meet should stay close after the 200 back, but barring any DQs will break wide open in the 100 free and 200 breaststroke in favor of the Gators. Including the mile, which doesn’t technically have A, B, or C finals, the Gators have 2 more A finalists and 5 more scorers overall in just the individual swimming events on Saturday night. Neither team has had a distinct advantage on diving yet at the meet, and the 400 free relay should be fairly competitive.

A young Texas A&M team is pretty-well cemented into 3rd place. That would make their 2nd-straight top 3 finish (they were 2nd last season) after never finishing better than 7th in their first 5 seasons since joining the SEC. The best team battle tonight will be Tennessee vs. Georgia. Tennessee has a decided diving advantage, while Georgia has a big edge in the mile. With scoring projected to only be 13 points apart before that, that one could come down to the final relay (advantage: Tennessee). Alabama isn’t far behind, but only earned 2 A finalists on Saturday evening, which will make it hard to catch up to either team.

On the women’s side, Texas A&M carries an 83 point lead into the final day of competition. While the Gators will cut into that in the 200 back, surprising depth from the Aggies in the 100 free (the sprints are their weakest group this year) will claw them back before they put the meet away with 6 scorers in the 200 breast (versus only 2 for Florida).

Neither team had a great morning session, but A&M did enough to secure their spot atop the conference for a 4th-straight season.

Auburn should fault up the rankings, and have a chance at fighting-off Georgia and Kentucky for 4th (though Georgia has the superior distance program). This would be a big win for Gary Taylor’s recruiting campaign, as the Tigers were 5th in each of the last two seasons under Brett Hawke (and haven’t been better than 4th since 2011).

Note: does not include diving

Note: does not include diving

Note: there are 3 swimoffs on the women’s side of the pool. None should substantially change scoring.

As usual, the Aggie Women were under-rated and then over-performed. I don’t think they would have it any other way. Many said that they couldn’t win the SEC after graduating arguably their best class ever. And, most felt they were too weak in the sprints and relays. But, all week, they seem to have been finishing higher than their seed, and their depth shines again. Coach Bultman knows how to get his team ready for when it counts. And, their senior class should be proud once they get this one in the bag …. 4-straight SEC Championships (assuming Keith’s projections hold true) is a huge achievement.

OK, OK we knows when we are bested. Congratulations to T+M for a hard fought and well deserved win. BUT just remember this all you Texas folk…iffin it twarnt for us Tenesseans there would not be a Texas! Remember the Alamo.

Have you seen the Florida divers? What are you even saying? “no team has a distinct diving advantage”

Agreed Anthony is the epitome of humility, kindness and graciousness. He is a true champion and sportsman. Congratulations to him and all of the UF athletes.