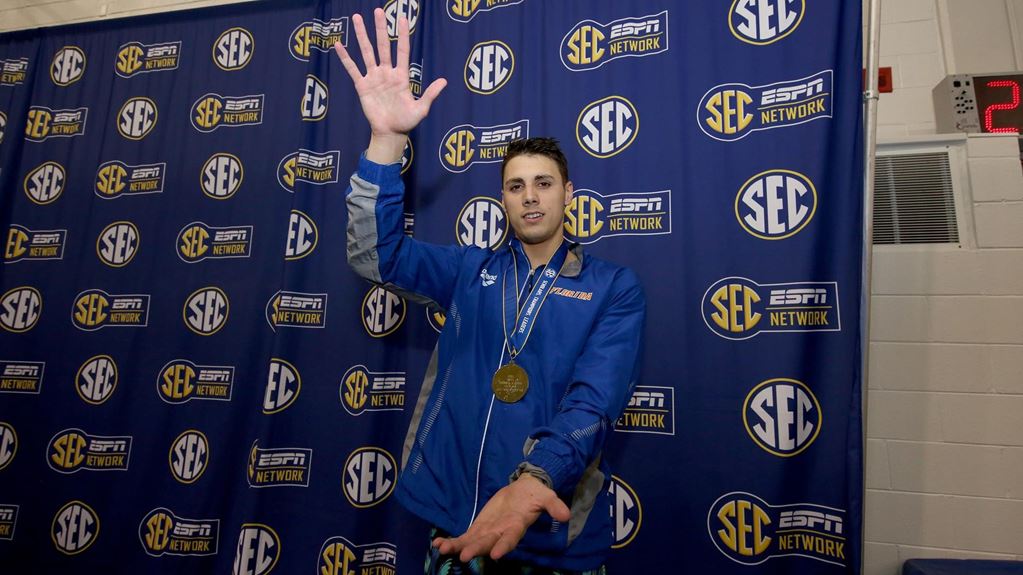 Khader Baqlah returned to the top of the SEC podium in the 200 free as the Florida Gators earned their 8th-straight title. Current photo via Courtney Culbreath/Florida Athletics

After losing several top scorers to transfers, graduations, or redshirts, there was expectation that the Florida men would have a challenge on their hands to keep their SEC title streak alive. The Gators had several swimmers step up big time, however, and got the job done for the 8th year in a row. This is their 2nd SEC title under Head Coach Anthony Nesty, who has been coaching for the Gators for 22 seasons.

Sophomore Kieran Smith was a standout for the Gators. On the first night, he crushed the SEC Record as he became the 4th fastest man in history of the 200 free. That was on the leadoff of the Gators’ 800 free relay that took down the SEC Meet Record. Smith went on to blow away the American Record in the 500 free. He also won the 400 IM title.

Bobby Finke repeated as the mile champion, demolishing the NCAA and American Record in the process. Khader Baqlah, who won the 200 free in 2018, returned to the top of the podium. Baqlah picked up his 2nd career individual SEC title.

The Gators had several swimmers really step up, and their depth is what brought them this 8th win in a row. One of those swimmers was Dillon Hillis, who earned bronze in the 100 breast. Gerry Quinn was a key piece of the winning 800 free relay and made the final in the 200 free. This was Quinn’s first time making the SEC roster for the Gators. Freshmen Eric Friese and Kevin Vargas also made the championship finals in their first SEC meet.

Even with several members of last season’s team now absent due to graduation, redshirts, or transfers, the Gators pulled off the win by over 200 points. They had 13 swimmers qualify for championship finals. Below is the full list of championship finalists for the 2020 Florida Gators:

Yeah! Go gators! They can totally swim fast when they have to!

The 400IM was the turning point for this team. Unbelievable depth led this team to a title, but it’ll be interesting to see how things shake up in the years to come

It doesn’t look like Greg Troy is missed much