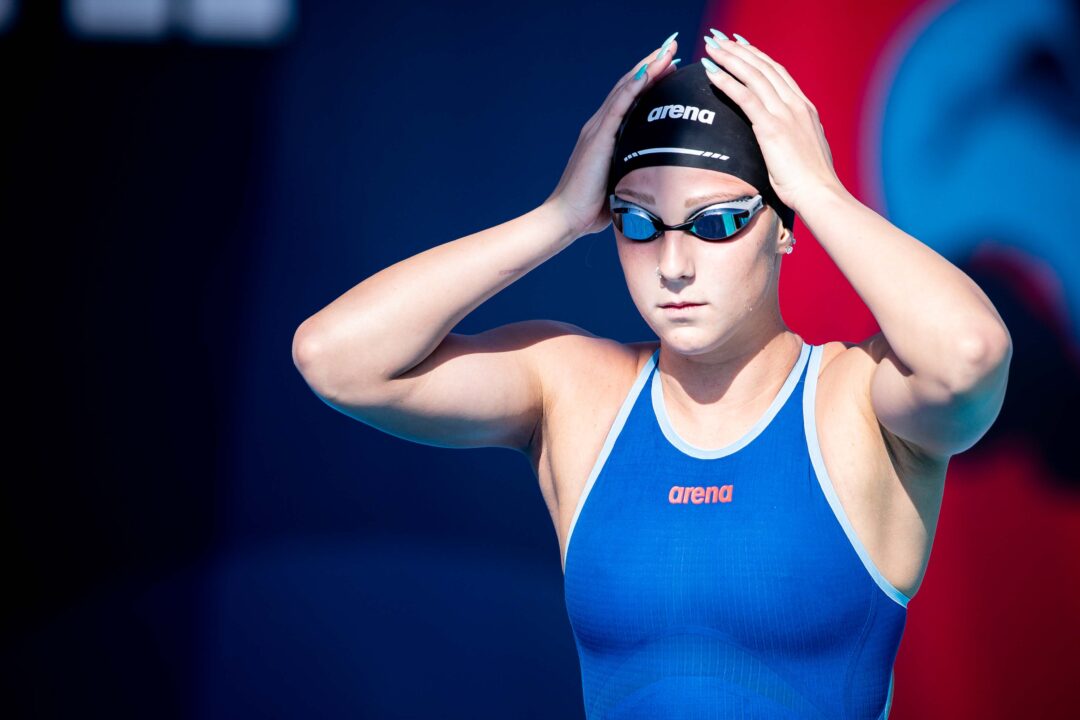 Entering her freshman year at Virginia, Claire Tuggle is a prime candidate to take a giant leap forward over the next 12 months. Archive photo via Jack Spitser/Spitser Photography

Not only does September mark the beginning of a new NCAA, high school and club season, but it’s also the turning of the page on the international calendar.

For the United States, a good number of the country’s best are in college, meaning they likely won’t race internationally until April—except for potentially Short Course Worlds.

The same goes for a lot of the junior-aged swimmers, who are with their home clubs, though we should see a group head to race on the FINA World Cup circuit beginning next month.

For the pros, some may take on the World Cup and SC Worlds, but the main focus will be hitting a big training block for the next few months prior to the start of 2023.

So while it might seem early, we’re going to take a look at five breakout candidates for the U.S. in the 2022-23 international season.

That is, which athletes could go from not really being in the conversation in 2022, to being in the hunt for a World Championship berth in 2023.

The goal is to avoid swimmers on the 2022 Worlds team, along with those who had a big summer domestically. Check out the men’s edition here.

This is a follow-up to our five breakout candidates for the 2022-23 NCAA season.

Although she might fly a little bit under the radar given the star-studded cast surrounding her at Virginia, Reilly Tiltmann was an instant contributor with the Cavaliers at the NCAA level, and this past summer, she took a giant step forward in the long course pool.

After graduating high school early and joining UVA for the spring semester in 2021, Tiltmann made an immediate impact in her NCAA debut, placing fifth in the 200 backstroke. The Elmbrook Swim Club product then ratcheted things up a few notches last season, scoring 37 individual points.

After showing marked long course improvement in 2022, and having gone toe-to-toe with the likes of Phoebe Bacon and Rhyan White in the NCAA final last season, look for Tiltmann to be a legitimate contender for a berth on a senior national travel team moving forward.

Entering her freshman year at Wisconsin with best times from 2019, Paige McKenna had a phenomenal season for the Badgers that culminated with a national title in the 1650 free.

Coming off her first year in the NCAA, which also included a pair of Big Ten titles in the 500 and 1650, McKenna underwent surgery to fix a torn labrum and subsequently didn’t compete during the long course season.

After experiencing so much improvement during her first season in Madison, McKenna has a great chance to not only double down on her collegiate success as a sophomore, but could also start to really make an impact on the long course scene after not racing in the big pool this past summer.

A top-15 recruit in the girls’ high school class of 2023, Hannah Bellard has shown a wide-ranging skillset in the long course pool over the last year that probably exceeds her projections in the NCAA.

Having been at relatively the same high level for the past two seasons, the Club Wolverine product, who will attend the University of Michigan next fall, is seemingly due for another jump up the ranks. When it inevitably comes, she’ll enter a new tier on the U.S. senior scene.

Chloe Stepanek was a revelation at Texas A&M in 2020-21, leading the Aggies in points at both SECs and NCAAs as a freshman. Not only did she manage a fourth-place finish in the 200 free at NCAAs in her first year, but the best time she swam leading off the 800 free relay, 1:42.89, would’ve been second.

In long course, the explosion that she experienced in her freshman year in yards hasn’t come as quick.

The talent is clearly there. It seems Stepanek just needs something to click in the big pool for her to find a new gear and join the ever-growing list of candidates for a spot on the U.S. 800 free relay.

Having been at relatively the same level since 2018, Claire Tuggle is a prime candidate to take that next step in the coming long course season as she heads into her freshman year at the University of Virginia.

Joining such an accomplished group of athletes at UVA, along with a coaching staff that’s worked wonders with the Cavalier swimmers over the last few years, 2022-23 is not only the season in which Tuggle will get her feet wet in the NCAA, but could also be her next breakout on the international stage.

It’s time for Kaitlyn Dobler to break out in the women’s 100 meter breaststroke.

She already did a 1:06 its a little crowded at the top in the US

I’ll go with Cavan Gormsen or Jillian Cox to break out in the women’s 200 meter freestyle in lieu of Claire Tuggle or Chloe Stepanek:

Why talk negatively about anyone’s prospects? Especially younger swimmers? How does that serve our athletes?

In the women’s backstroke events, it will be the usual suspects:

As for the women’s 1500 meter freestyle, no one is touching Katie Grimes let alone Katie Ledecky.

Hannnah😎😎😎😎😎😎😎😎. The goat 🐐. Absolute beast. I’ve been saying this for years. She is a force and among the best people I know.