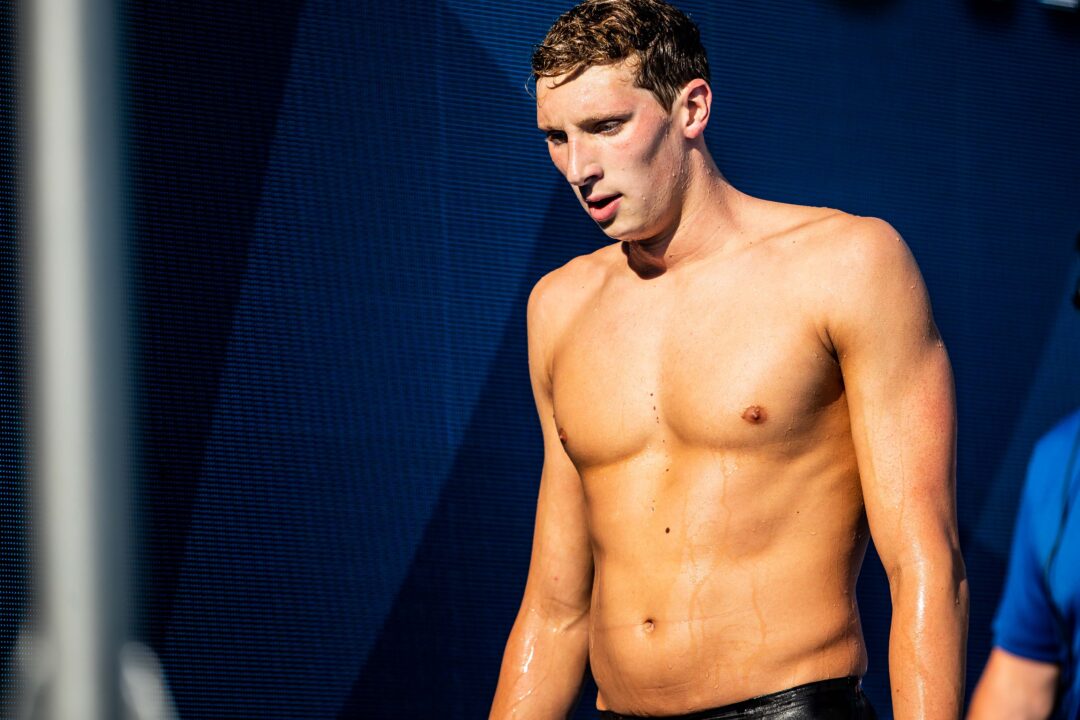 Texas Longhorn David Johnston is among the names that could make a significant impact on the U.S. scene this coming season internationally. Archive photo via Jack Spitser/Spitser Photography

Not only does September mark the beginning of a new NCAA, high school and club season, but it’s also the turning of the page on the international calendar.

For the United States, a good number of the country’s best are in college, meaning they likely won’t race internationally until April—except for potentially Short Course Worlds.

The same goes for a lot of the junior-aged swimmers, who are with their home clubs, though we should see a group head to race on the FINA World Cup circuit beginning next month.

For the pros, some may take on the World Cup and SC Worlds, but the main focus will be hitting a big training block for the next few months prior to the start of 2023.

So while it might seem early, we’re going to take a look at five breakout candidates for the U.S. in the 2022-23 international season.

That is, which athletes could go from not really being in the conversation in 2022, to being in the hunt for a World Championship berth in 2023.

The goal is to avoid swimmers on the 2022 Worlds team, along with those who had a big summer domestically—names like Matt Fallon, Luke Hobson, Matt King and Gabriel Jett, for example.

This is a follow-up to our five breakout candidates for the 2022-23 NCAA season.

David Johnston has been knocking on the door for a few years, and 2023 could well be the time he takes the next step in long course.

Through two seasons at the University of Texas, Johnston has amassed five of a possible six First Team All-American honors, including placing fifth in the 1650 free, sixth in the 500 free and sixth in the 400 IM at the 2022 NCAA Championships.

In the long course pool, the Dallas native has shown impressive progress since joining the Longhorns, first earning a pair of top-eight finishes at the 2021 Olympic Trials before climbing up to third in the 800 free, third in the 1500 free and fourth in the 400 IM at the International Team Trials this past April.

Charlie Clark took hold of the mantle as the #2 American in the 800 and 1500 free this past summer behind Bobby Finke, but Johnston is trending upwards and will keep Clark on his toes.

If this improvement continues, he’ll find himself on a major international team sooner rather than later.

The landscape of men’s breaststroke in the U.S. has seemingly been dominated by the same subset of athletes for the last several years.

Names such as Kevin Cordes, Andrew Wilson, Cody Miller and Josh Prenot were long fixtures in both the 100 and 200-meter distances domestically, but the tide has started to turn.

Nic Fink and Will Licon are two veterans still very much in the mix, and Michael Andrew has become one of the world’s best in the 100, but there’s a new wave that’s entered the fold.

The group is head up by the likes of Matt Fallon and Josh Matheny, who have both had breakthrough long course swims of late, and the swimmer who could be next is AJ Pouch.

Pouch, who is entering his senior year at Virginia Tech, has shown steady progress in the long course pool and could be on the verge of making a senior international team.

Fallon won the event in 2:07.91, but the second spot for the U.S. seems to be opening up. Fink and Charlie Swanson were the American representatives at the World Championships, but Fink seems to be trending down towards the shorter distances at this stage of his career, and Swanson’s best (2:08.84) is similar to Pouch’s.

Another swimmer attending the University of Texas this fall who is poised to breakout in the long course pool is Alec Enyeart, who is entering his freshman year in Austin.

As was noted with Johnston, Bobby Finke holds the #1 slot in the 800 and 1500 free domestically for the foreseeable future. But it’s easy to see Enyeart challenging for the #2 spot as soon as next summer, not to mention he could pounce on the opportunity in the relatively wide open 400 free.

He also earned a berth on the National Team in the 1500, putting him in contention to possibly earn an invite to represent the U.S. at the SC World Championships in December.

It’s been a steady rise up the ranks for University of Florida sprinter Adam Chaney, who really came into his own during his freshman year in 2021, highlighted by a third-place finish in the 50 free at his debut NCAAs.

His stock continued to rise at the Olympic Trials a few months later, solidifying himself as a top-10 swimmer in the country in the 50 free (fifth), 100 free (ninth) and 100 back (ninth).

Chaney followed that up with a solid sophomore campaign with the Gators, and although he wasn’t at his best at the International Team Trials in April (although he had a sixth-place finish in the 50 back), the 20-year-old came back with a PB of 53.68 in the 100 back at Summer Nationals in July.

The former Mason Manta Ray has been on the precipice of a major breakthrough in long course for a few years now—at the 2019 World Junior Championships, he split 47.94 on the 400 free relay.

There’s an argument to be made that it’s already happened, but a long course breakout seems to be imminent for Grant House.

The Arizona State Sun Devil had a monstrous collegiate campaign in 2021-22, including a trio of 1:30-point 200 free swims that culminated with a runner-up finish at NCAAs.

Now, in his fifth year at ASU, the 24-year-old seems to be hitting a new stride, including a very impressive showing at the team’s intrasquad pentathlon in September.

If this improvement curve continues, House will be in a very good spot to vie for a berth on the 2023 World Championship team. He missed a spot on the 2022-23 National Team by two one-hundredths of a second, which may only serve as a motivator for the coming season.

So AJ finished top 5 at US Trials, cracked 2:10 this year, made the US National team, and was featured on Braden Keith’s Twitter for his grilling abilities. What’s a guy gotta do for a bio? Squash the beef 🥩

TBH I think the reason VT has to recruit internationally is because their swimmers seem really annoying and I would bet no Americans want to go there because of that.

Do you not find this entertaining? I think the back and forth helps lighten the mood

I’m sure Braden would appreciate a little sample of what AJ’s been grilling… Wanna squash the beef? Send some beef.

Is house the pre-season favorite to win the 2 free at NC’s?

I’d argue Jake Foster has broken out at the NCAA level and not internationally. Confused by his placement on that list and not here

Now give AJ a bio please

You guys finally made up with AJ