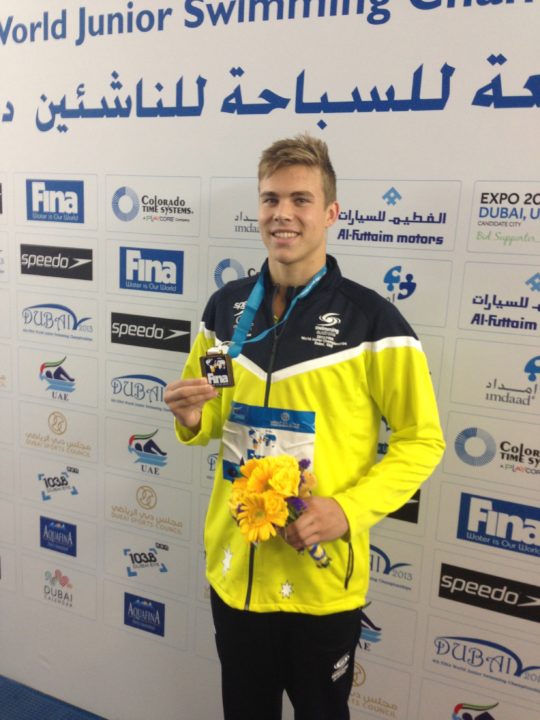 Luke Percy already won the 50 free at World Juniors; he'll be looking for a middle lane coming out of Friday's semifinals in the 100. (Photo: Colin Blair/SwimSwam.com)

Day 5 of the 2013 FINA Junior World Champinships are back to a light session of medals, with just 5 sets being given out. We won’t get any swims from Mack Horton, but the other star of this meet so far, Ruta Meilutyte, will have two swims: the girls’ 50 free semifinals and the girls 50 back finals.

Luke Percy from Australia will also lead the charge with his shot at a sprint sweep; Russia’s Svetlana Chimrova is looking for more recors in the girls’ 100 fly semis; and the Americans’ best chance for gold probably comes early in the girls’ 1500 freestyle, or the boys’ 400 IM if Gunnar Bentz wakes up in finals.

Refresh the page often, as we’ll be recapping the races as they happen.

A reminder of all the links you need to follow tonight’s action.

American Becca Mann absolutely torched the field in the girls’ 1500 freestyle. She’s shown the wear of just how many big meets (and how much travel) she’s done this summer in Dubai, but she was still the dominant force of the girls’ 1500 at this meet, and swam to a 16:23.89 for the victory.

From the start of her final heat, nobody was really close to her (though 5th-place finisher Kiah Melverton from Australia was out about as fast, in the morning heats). She tore to a 2:07 opening 200, a 4:19 opening 400, and an 8:42 opening 800 meters. Ultimately, she finished in a last 400 meters of 4:23 to complete a thorough domination in this race.

Joining her on the podium were a pair of young swimmers who very well could be battling out for this title in 2015: Italy’s Linda Caponi (16:33.62) and American Isabella Rongione (16:35.28). Rongione went out way faster in this little head-to-head battle, opening up in 8:45: four seconds faster than Caponi and her teammate Alisia Tettamanzi, who would ultimately finish 4th in 16:35.97.

The Italians, though, perhaps mimicking their country’s most famous freestyler Federica Pellegrini, had quite a bit left for the back half of their races and made up that ground through the second 1/3 of the race. Rongione would push back at the end, but it wasn’t enough to catch the Italians (especially Caponi, who had a burst of speed from 1200-1300 meters, where she was three seconds better than Rongione).

After what had been a pretty good preliminary round, the times tapered off noticeably in this boys’ 100 free semi-final, with most of the top-side of this field adding time.

American Caeleb Dressel took the top seed in 49.57, while the 2nd seed went to Russian Evgeny Sedov (the only of the top four semifinal finishers to improve).

Australian Luke Percy was half-a-second slower than his top seed in prelims to take the 3rd seed in 49.85, and he was followed closely by his teammate Regan Leong in 49.96.

There will be an exciting three-way swimoff for the last spot in finals between American Paul Powers, Russia’s Ivan Kuzmenko, and Poland’s Jan Holub, who were all 50.37’s.

Also under those old records was Hungary’s Liliana Szilagyi in 59.11, with Australia’s Jemma Schlicht touching for the 3rd seed in 59.30.

Those three, just like prelims, were the only ones under a minute in this race. American Courtney Weaver placed 4th in the semis in 1:00.04, and Japan’s Misuzu Yabu was 5th in 1:00.06.

The first full-blown final of the session (as compared to timed finals) came about 45 minutes in with the boys’ 50 fly. There, Australian Cameron Jones swam a 23.96 to just barely out-touch Dylan Carter 23.96-23.98.

Japan’s Takaya Yasue, who has been showing his face as the next generation of Japanese butterfliers (with the current wave aging) took the bronze in 24.01; he adds this medal to his win in the 100 fly earlier in the meet.

Russia’s Rozaliya Nasretdinova had a very good semi-final swim in this girls’ 50 free, just as she did in the 100 free, to take the top seed in 25.02, and in the process break the Meet Record held in a 25.2 by Australia’s Bronte Campbell (now one of the fastest senior sprinters in history).

Those two will be the favorites in finals, but Italian upstart Giorgina Biondani will not be far behind after a 25.28 in her semifinal. She has had an impressive year in 2013 (she turned just 16 in June), and this swim was seven-tenths faster than hers in prelims.

Australia’s Shayna Jack and the United States’ Abby Weitzeil tied for 4th in 25.56 with the times dropping off after the top three. 100 free winner Siobhan Haughey from Hong Kong took 6th in 25.64, followed by Fernanda Delgado from Brazil and Cloe Hache from France.

Continuing the run of sprint races, in the boys’ 50 breaststroke semifinals, Slovenia’s Peter John Stevens took the top seed in 28.04, followed by Russia’s Vsevolod Zanko in 28.19 and Brazil’s Pedro Cardona in 28.24.

This will be a diverse final, with Poland’s Krzysztof Tokarski and Uzbekistan’s Vladislav Mustafin tying for 4th in 28.33. American Carsten Vissering made a huge leap up from the prelims to place 6th in the semi in 28.37, and Maciej Holub made Poland the only country with two in the final. 8th in the semis was Kohei Goto.

New Zealand’s Gabrielle Fa’Amausili has had her breakthrough. There were a lot of potential upset picks floating around in this 50 back, but the 14-year old wasn’t the focus of them. She took the victory in this race in 28.64. She joins her cousin Orinoco Fa’Amausili-Banse, who won the boys’ 50 free at the 2008 version of this meet.

She upended Russia’s Daria Ustinova (though Ustinova’s semifinal time was still better than the gold medal time), as the 15-year old swam a 28.71 for silver. American Clara Smiddy took bronze in 28.86, just out-touching fellow US swimmer Kathleen Baker in 28.88.

Ruta Meilutyte showed her first little crack of the meet, coming up 5th in 29.03: slower than she was in semis. After the three days of racing she’s had, though, nobody will hold that against her. Great Britain’s Jessica Fullalove was 6th in 29.15.

The United States’ Gunnar Bentz just barely slid through prelims of the boys’ 400 IM. The Americans, however, might be the masters of the prelims 400 IM, and he whacked more than 9 seconds off from his 8th-place morning swim to take the win in 4:14.97: a new Championship Record. That broke the 4:15.64 that Ukraine’s Maksym Shemberev swam to win in 2011.

He out-battled Semen Makovic of Russia with a very impressive back-half, not taking the lead until the last 50 meters where Bentz split 27.74 and Makovich split 29.49 en route to a 4:15.89 (gasp – Bentz outsplit Lochte!). This was an incredible battle, maybe one of the best head-to-head races of the meet so far, between two swimmers who are sure to be in the intrenational spotlight for a long time. Both swimmers have been through a long summer of competing, but they still showed up here for an outstanding battle.

The two British swimmers rounded out the final.

The Russian girls, just like they did at European Juniors, were a dominant force in this 400 free relay. They had four swimmers go 55.55 or better, including the fastest split coming from leadoff Mariia Baklakova in 55.05. She was joined by Rozaliya Nasretdinova (55.35), Valeriia Kolotushkina (55.45), and Daria Ustinova (55.55) in the final as they roared to a 3;41.40 win and Championship Record. They took this race out early and dominated it by the finish.

The battle for 2nd, however, was an incredible one, as the Australians took 2nd in 3:43.03 and the Americans 3rd in 3:43.04. That’s a .01 second separation, that for the second straight day will leave U.S. fans scratching their heads on finals relay selection.

Abby Weitzeil lead off the American prelims relay in a 55.9 flat-start. That was the fastest split of the entire American relay, and she did it on a leadoff. She, however, was passed over in finals for the other three swimmers, including one who was a full second slower on a rolling start.

The Americans instead went with Cierra Runge (55.22), Katie McLaughlin (55.67), Alexandra Meyers (56.34), and Mary Schneider (55.81) in finals. Those at the meet and connected to swimmers on the team tell us that the Americans’ relay decisions are being made strictly based on times at qualifying meets.

No live streaming today?
On the official link, they talk about a soccer game and I don’t understand anything!
Please, we are waiting for swimming!

Thank you. You are my savior.

It was from yesterday, not sure who posted it then. But they should get the credit.

It seems quality has been improved in this “new livestream” from what it was in old one. The races are available on-demand basis too, which is a good thing.