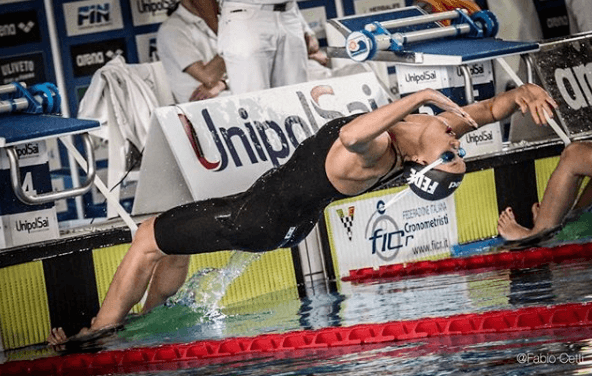 Federica Pellegrini nearly snatched the 100 back Italian record with her win in that same event tonight (1:00.03). Archive photo via Fabio Cetti KCS Media

Federica Pellegrini nearly snatched the 100 back Italian record with her win in that same event tonight (1:00.03). Last night, Margherita Panziera became the first Italian woman to break a minute in the race (59.96)– tonight, Panziera fell just short of Pellegrini (1:00.54). Her national record still lives on, though.

Fiamme Oro Roma won the women’s 4×200 free relay in 8:04.58, with a 1:59.76 split from Stefanie Pirozzi. Pellegrini had a 1:56.67 split on Canottieri Aniene’s fourth place relay, and in an interview with SwimSwam Italia, she said that she may continue to race the 200 free despite announcing she would retire from the event. This goes against her decision, following her 2017 WC gold in the 200 free, to retire from the event on the big stage.

The women’s 200 fly was a fantastic race, with three women finishing within a second of each other. Alessia Polieri sat in second behind Ilaria Bianchi for most of the race, but used a 33.20 final 50 to inch past her for the win at 2:08.15. Bianchi was close behind for second (2:08.33), while Ilaria Cusinato posted a 2:08.78 for third.

Matteo Rivolta and Piero Codia had a showdown in the men’s 100 fly, as Rivolta edged the national record holder by a mere hundredth. It was Rivolta for the win (51.89) ahead of Codia (51.90).

I am Italian and yes, she is the most followed female athlete here, with her successes, love stories and whatnot.

SwimSwam you should do a ranking article for both male and female swimmers of today and yesteryear. Obvi Phelps is would be at the top but would still be interesting to see the rest.

So after some social media digging…I’ve come to the conclusion that Pellegrini is the most well known female swimmer world wide. Her social media following dwarfs everyone else…its not even close. She has a bigger following than Ledecky, Hosszú, and Missy (Who appears to still be more well known than the other two).

Any Italian fans on here that can comment? I’m sure she’s a big deal in Italy.

Not Italian but I do know that she’s a superstar in Italy indeed.

How many followers were outside of Italy? Maybe Italian people like to talk more than Swedish ones. Are those followings about swimming or other aspects of her life? I’m sure that here at swimswam.com the name of Federica Pellegrini won’t be the one mentioned most.

She is surely our most known swimmer (male and female) and even the most known female athlete in Italy.
During Olympic/WC/European months (around one month before and one month after there are various tv adds with her), when she swim there is always a big crowd.
It is not only due her amazing swimming career (mostly) but her love story were pretty well covered (Manadou/Marin and Marin/Magnini triangle).