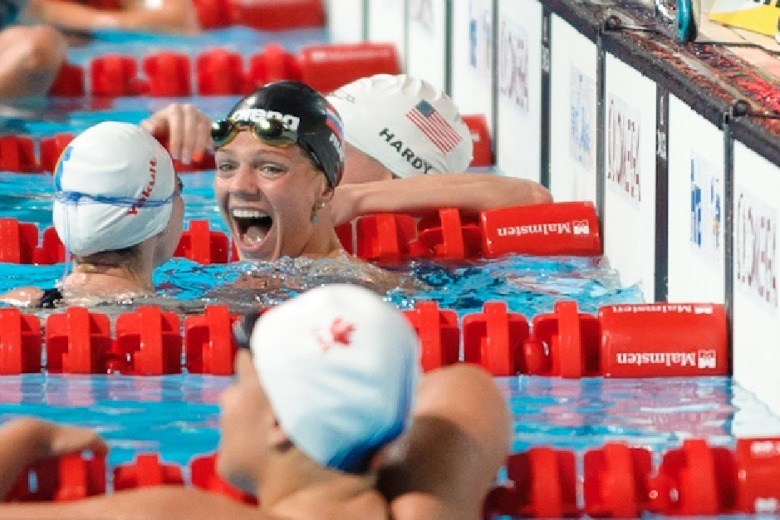 In a rematch of the 200 breaststroke from this summer’s World Championships, Russian Yuliya Efimova and Rikke Moeller Pedersen faced... Current photo via Victor Puig

An extreme athlete is planning on circumnavigating the world and breaking a world record in a triathlon that is 120 times the length of an Ironman.

In a rematch of the 200 breaststroke from this summer’s World Championships, Russian Yuliya Efimova and Rikke Moeller Pedersen faced off in the for the European crown tonight in Herning. The race did not disappoint as Efimova won the event breaking Rebecca Soni‘s 2009 world record of 2:14.57 winning the event in a time of 2:14.39.

Much like their race in Barcelona Pederson took the race swiftly turning at the halfway mark in a time of 1:04.79 well under the world record, but once again the second half of the race belonged to Efimova. Pedersen, the long course world record holder, eventually finished second in a time of 2:15.21 better her previous lifetime best of 2:15.93.

Russian Vitalina Simonova finished third in a time of 2:18.88.

The men’s 400 IM may not have produced very impressive final results, but it once an epic battle between the top three swimmers.

Gal Nevo of Israel lead after the butterfly, Hungarian David Verraszto led by more than two seconds after the backstroke, Nevo made up almost all that ground in the breaststroke and the freestyle as the two man fought for the victory Italian Federico Turrini made a push to catch them both almost overcoming a two second gap in the final 100 meters.

In the first event of the evening on the second day of the 2013 European Short Course Championships in Herning saw Mireia Belmonte Garcia of Spain and Danish star and home crowd favourite Lotte Friis battle for the women’s 800 freestyle crown.

Belmonte Garcia showed yesterday that she was in strong form, winning the women’s 200 butterfly breaking Katinka Hosszu’s european record in the process. In tonight’s final the world record holder in the 400 and 800 freestyle was pushed by Friis who collected silver in both the 800 and 1500 freestyle in Barcelona this summer.

Friis took the race out aggressively turning at the 200 meter mark two seconds ahead of Belmonte Garcia and over a second at the halfway point (Friis – 4:00.23  Belmonte Garcia – 4:01.79), who after that point start to reel in the Dane who won the event at the 2012 European Short Course Championships.

Belmonte Garcia took over the lead with 250 meters to go eventually winning the event in a time of 8:05.18 well off the world and european mark of 7:59.34, which she posted earlier this year. Friis finished second in a time of 8:08.68.

Sharon Rouwendaal of the Netherlands finished third in a time of 8:14.24.

Olympic champion Ranomi Kromowidjojo of the Netherlands took the 100 freestyle in a time of 51.78. It was no surprise that Kromowidjojo won the event as she came in as the world’s number one ranked swimmer, having posted a 51.28 earlier in the years and displayed impressive speed in the 50 freestyle at the Amsterdam Cup last weekend.

The race did play out a bit differently as one may have thought with Fran Halsall leading at the halfway point turning in a time of 25.06, while Kromowidjojo hit the wall in fourth with a time of 25.14, Halsall fell off the pace finishing fifth while Sarah Sjoestroem, swimming her second event of the evening, took the silver in a time of 51.99, just off her season’s best of 51.93.

Aliaksandra Herasimenia of Belarus finished third in a time of 52.34.

The crowd finally got what they wanted as Danish swimmer Mie Nielsen took the country’s first individual gold of the competition winning the event in a time of 55.99. Nielsen did not only win the event, but set a new european record breaking Russian Kseniya Moskvina‘s 2009 record of 56.36. She also destroyed her own Danish mark of 56.73, which she set at last year’s short course world championships in Istanbul.

Nielsen was followed closely by Simona Baumrtova of the Czech Republic, who was also under the previous european mark, hitting the wall in a time of 56.28 while 2012 european champion Daryna Zevina of the Ukraine finished third in a time of 56.94.

World record holder Evegeny Korotyshkin of Russia took the men’s 100 butterfly in a time of 49.68. Korotyshkin was the only swimmer to go under the 50 second mark.

Winning her second medal of the evening Sarah Sjoestroem took the 50 butterfly in a championship record time of 24.90, which is one one-hundredth of a second better than her season’s best of 24.91. She was followed by long course world champion Jeanette Ottesen of Denmark who collected the silver posting a time of 25.03.

Inge Dekker of the Netherlands finished third in a time of 25.29.

Jeremy Stravius of France won his second medal of the evening winning the men’s 50 backstroke in a time of 23.19, just off his season’s best and world’s top ranked time of 22.99. German Christian Diener finished second in a time of 23.38 followed by Belarusian Pavel Sankovic who finished third posting a time of 23.45.

The Russian team won the event by over a second half setting a new world record time of 1:37.63 breaking the old mark set by the Australians at the World Cup in Tokyo.

The race for second was incredible with the next eight teams only separated by 87 one-hundredths of a second. In the end Germany took second posting a time of 1:39.32 followed by the Czech Republic who finished in a time of 1:39.54.

In her only event of the evening Katinka Hosszu qualified for the final with the fastest time putting up a 58.37 to win the second semi-final. Ruta Meilutyte finished just behind Hosszu recording a time of 58.78 followed by Amit Ivri of Israel who qualified third with a time of 58.87.

Although there is little separating the top three times in the semi-final this will probably not be the case as Stravius, who is the world’s top ranked swimmer has a season’s best time of 22.99.

No surprises in the women’s 50 butterfly semi-final as Sarah Sjoestroem of Sweden took the first heat in a time of 25.45 to qualify with the fastest time going into tonight’s final. Hometown favourite, world champion, Jeanette Ottesen won the second semi in a time of 25.47 and put up the next fastest time ,on two one-hundredths of a second behind Sjoestroem. Inge Dekker of the Netherlands qualified in the third position recording a time of 25.62.

The three women came into the competition as the top three ranked athletes in the event in Europe. With Ottesen and Sjoestroem both having season’s bests under the 25 second mark look for the two have an exciting battle tonight that will result in much more impressive performances.