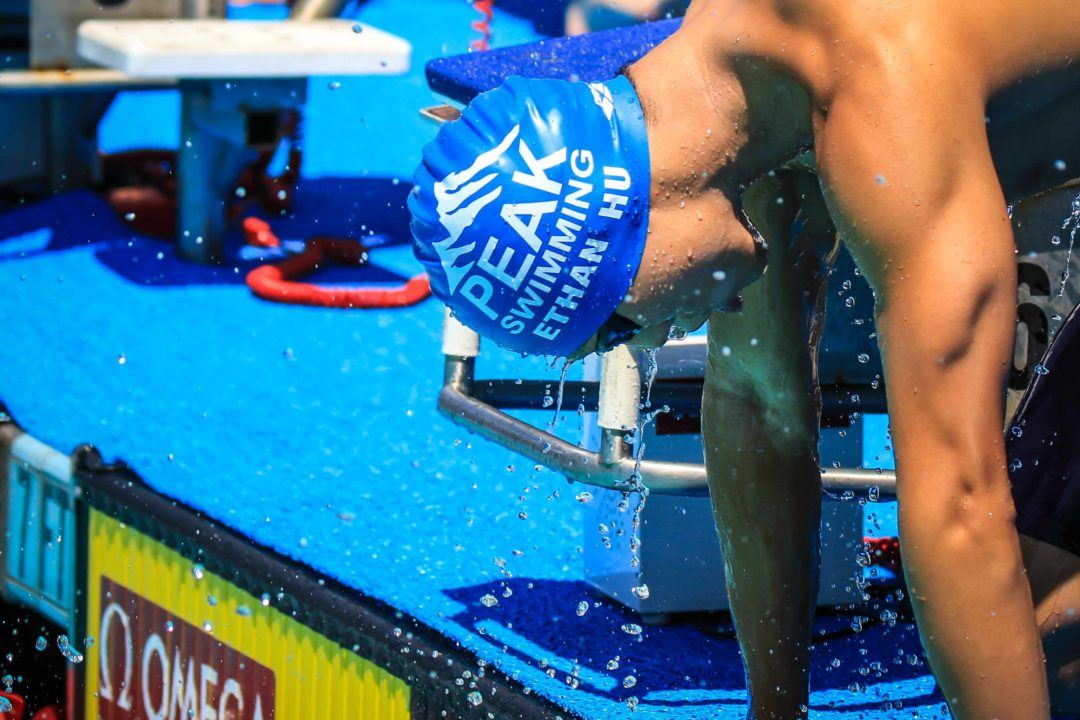 His swim comes on the heels of Luca Urlando breaking the National Public School Record just over a week ago with a 45.88. Stock photo via Jack Spitser/Spitser Photography

Ethan Hu, a 17-year-old junior at The Harker School in California, posted speedy times all around at the CIF Swimming & Diving Finals on Saturday, including the 2nd fastest high school 100 fly ever. Hu roared to a new personal best 45.72 en route to winning the boys 100 fly, touching just .20 seconds off Joseph Schooling‘s National High School Record of 45.52. His swim comes on the heels of Luca Urlando breaking the National Public School Record just over a week ago with a 45.88. Hu attends a private school, so he is ineligible for the Public School records. As a junior, Hu will have one more year to chase after Schooling’s 45.52 overall HS record.

Hu turned 17 earlier this year, and his performance at this meet ranks him as the 3rd fastest 17 & Under all-time. Here is the current list of top 5 17&U all-time:

Hu shaved .18 seconds off his best time of 45.90, which he had just swum at his Sectional meet a week ago. Here is the comparison of his splits between the two races:

The races were nearly identical, which isn’t too surprising given that there’s only a .18 second difference between them. That being said, Hu did manage to split faster on both 50s in his race at CIF State Finals. He also posted an quick 20.91 split on the fly leg of the Harker School 200 medley relay, which finished 3rd.

I guess they never miss huh

The times that high school swimmers are doing these days is hard to imagine. They’re crazy fast…… How big is Ethan Hu? Way back in time when I swam in high school, If someone told me that high school juniors would be going 45+ in the 100 fly, we would have thought that they were insane.

He is not that big, as far as I could tell being at the sectional meet when he went 45.90. He has incredible underwaters and great technique. Made it look easy.

Was re-timing some swims from the meet and noticed something very peculiar. It seems as though all the times may have been skewed a couple tenths slower than what they actually were. While timing the 50 splits, I noticed that the first 50 would be consistently around 0.3s faster than what meet mobile had the split as, while the second 50 was completely in line with what meet mobile had. As an example, a couple of buds and I re-timed the 100 fly for the top 2 guys and yielded an average of around 45.4/45.5 for Hu and around 46.3 for Syrkin. We went on to average out times for many other races and were puzzled to find out that… Read more »

U always see the flash before u hear the sound. Speed of light vs speed of sound.

I do understand that light travels faster than sound but there was a clearly noticeable pause between the light and sound sending the swimmers off the blocks. I wouldn’t say that in such a short distance that it’d take a 0.2/0.3 second delay from when you see the light to when you hear sound. If we can say that lanes 1-8 of a final are roughly around 5-25 meters away from the starting mechanism, then even sound should travel reach those two distances at roughly 0.02-0.07 seconds, whereas light would do so almost instantaneously. This still would leave around a .0x time difference between the light and the sound reaching the ears, nowhere close to the .2/.3 discrepancy found.

Were you watching a video? It’s extremely common to have video and audio ever-so-slightly out of sync. You also have to factor in your reaction time in starting your watch. See a flash – react…..usually .15 to .3 right there. That’s why it’s advantageous to have watch timing only over electronic timing. A person timing with a watch can anticipate a finish of a race and be within 100ths, but with the start, watches start a fraction after the beep/flash due to timers individual reaction time…..this shortens the overall time . (and also explains how you’re on for the second 50…..you’re not reacting to an unknown, you can see the wall touches as they are coming and hit it closer… Read more »

lets say you stand 30m away from the source of sound/light, then those would be at your position after .087s and 10^-7s respectively. so no you cant tell a difference there, you would have to stand more than 100m away to notice such a big difference as .3s, which prob wasnt the case for the camera

Do you really take the time to re-time races on video replay? Is this a thing? Do others do this? Skeptical much?