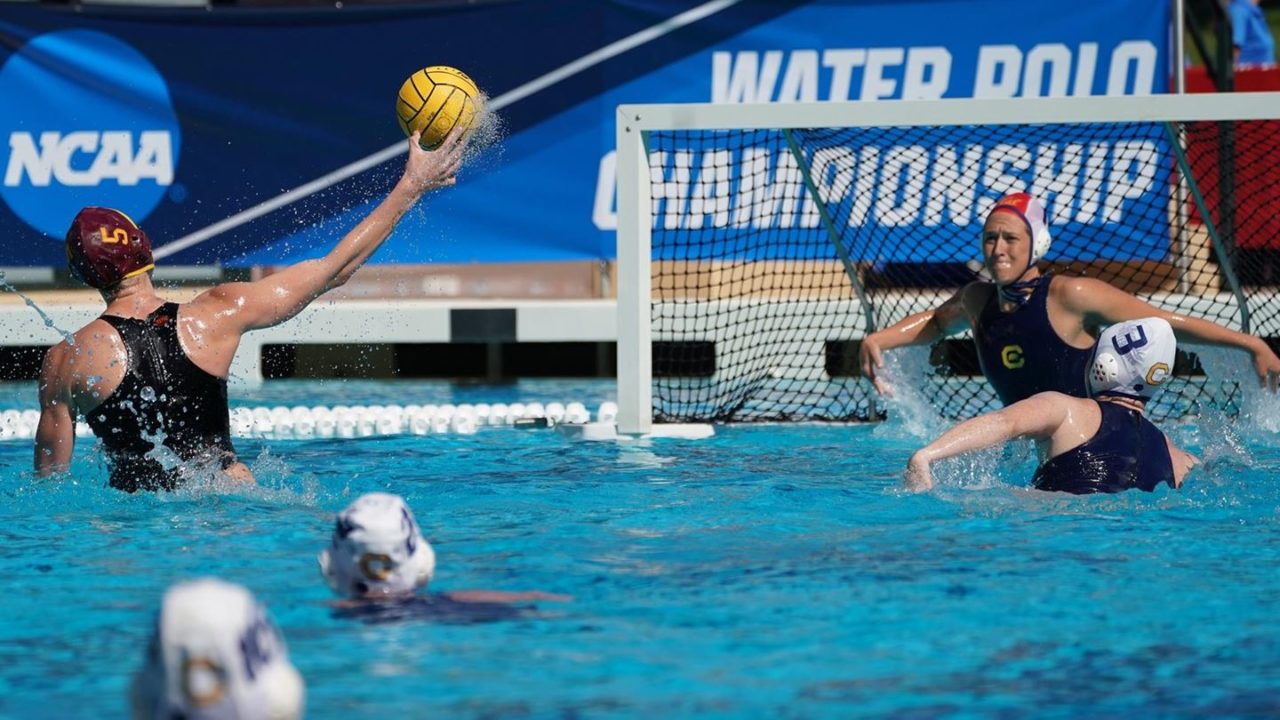 The NCAA Women's Water Polo national championship matchup is set, with defending champion #1 USC meeting 2018 runnerup #2 Stanford on Sunday. Both teams had to endure an overtime thriller on Saturday to earn their spot in the title match. Current photo via USC Athletics, Catharyn Hayne

The NCAA Women’s Water Polo national championship matchup is set, with defending champion #1 USC meeting 2018 runnerup #2 Stanford on Sunday. Both teams had to endure an overtime thriller on Saturday to earn their spot in the title match.

USC’s Paige Hauschild was the first to score in extra time, netting a penalty shot with 2:38 left in the first overtime. Bayley Weber tacked on an insurance goal for the Trojans with 2:10 remaining in the second OT. With just 39 ticks left on the clock, Elli Protopapas nudged Cal within one at 9-8 with a powerplay goal. USC’s Mireia Guiral ended any hopes of a last minute Cal comeback by burying an even strength goal with eight seconds remaining the game.

Brigit Mulder was the top scorer for Cal, netting two goals, while six other players found the back of the net. Claire Sonne, Sarah Siepker, Elli Protopapas, Kitty Lynn Joustra, Lauren Charter and Emma Wright rounded out the scoring for the Bears.

All told, the Trojans made good on 10 of their 41 shot attempts, while allow the Bears to convert eight of 33 attempts.

How It Happened: USC started the game with a three-goal onslaught in the first five minutes of play. Maud Megens put in a penalty shot just 30 seconds into the game (7:30). Amanda Longan made three saves for the Trojans, before getting a boost from her teammates via a Paige Hauschild goal at 4:23 and a Tilly Kearns power play score less than a minute later (3:42).

Cal got on the board with a power play goal of its own at 2:55 as Lauren Charter did the honors. Brigit Mulder continued the Bears’ counter with an even strength goal at 2:10 to cut the margin to one at 3-2 after one quarter.

Mulder found the back of the net on a powerplay just under two minutes into the second period (6:23) to even the score at 3. USC regained the advantage as Grace Tehaney (5:47) and Hauschild (5:06) scored to make it 5-3 Trojans. Emma Wright pulled Cal back within one with 41 seconds left in the half.

Sarah Siepker punched in an even strength goal with 6:25 to go in the third period to knot the score at 5. After a barrage of shots by both sides, Alejandra Aznar finally converted to make it 6-5 USC with one second remaining.

Aznar scored again just 21 seconds in the final stanza of regulation (7:39) to put the Trojans up two (7-5). Sonne made good on a power play opportunity at 5:11. Madison Tagg nabbed three saves for the Bears to set up Kitty Lynn Joustra‘s game-tying goal at 2:57. Tagg and Longan each added a save before the regulation clock wound down.

#2 Stanford (22-2) will make its 10th straight appearance in the NCAA championship match after edging past #3 UCLA 8-7 in overtime.

The Bruins (24-7) made Stanford work for the victory, erasing a 5-0 deficit to send the game to overtime. The teams were tied at 6-all entering the extra periods. The Cardinal scored twice in the first overtime, with Aria Fischer and Ryann Neushul doing the honors with full strength goals (2:10 and 1:12). Alexis Liebowitz gave the Bruins hope, scoring with 57 seconds left in the game, but her efforts were left begging as UCLA would not get another shot off the rest of the way.

Emalia Eichelberger made seven saves to go with seven goals allowed (.500 save percentage) in the complete game effort at goalkeeper for Stanford.

In goal for UCLA, Carlee Kapana made 14 saves and added two steals, while giving up eight goals (.636 save percentage).

How It Happened: Stanford cruised to a 5-0 lead, including four goals in the opening stanza each about a minute apart. Aria Fischer got things started with a power play goal just over a minute in (6:43). Kat Klass followed (5:42) before Aria Fischer hit again (4:54), this time at even strength. Fischer then drew an exclusion and her sister Makenzie Fischer nailed the penalty shot to make it 4-0 (3:19). UCLA missed five shots and Eichelberger saved one to keep the shutout in tact.

Aria Fischer notched a hat trick, adding another powerplay goal at the 3:35 mark in the second quarter. UCLA called timeout  and managed a powerplay of its own, netted by Rachel Whitelegge just 21 seconds later (3:14). Roxy Wheaton made good on a power play change with 14 seconds left in the half to pull the Bruins within three (5-2).

Val Ayala kept the scoring train rolling for the Bruins to start the third stanza, putting in an even strength goal at 6:34. Maddie Musselman continued to chip away with a score at 5:03. UCLA pulled even at 5-all as Alexis Liebowitz converted a power play at the 3:55 mark. Stanford called timeout to no avail.

As the fourth quarter ticked on, both defenses did their jobs, until Musselman gave UCLA its first lead on a powerplay with 4:11 to go in the game. Aria Fischer came through in the clutch for the Cardinal, drawing the game level at 6 on an even strength goal with 2:49 left.

Stanford scored twice in the first overtime. After having four shots missed or turned away, UCLA finally struck back with 57 seconds remaining in the second extra period, but could not finish the comeback.