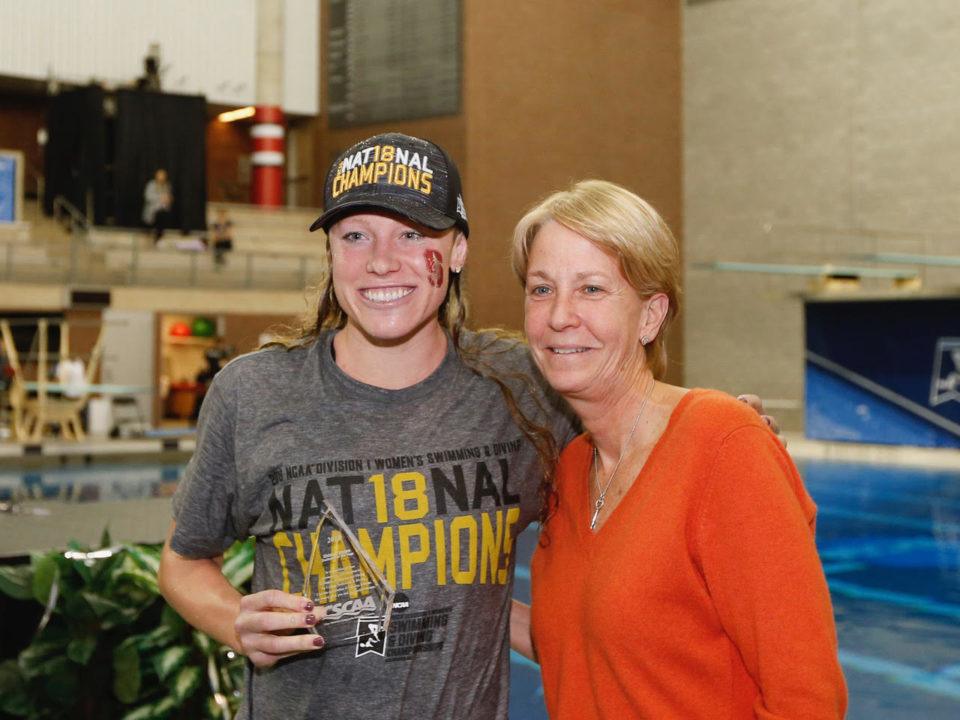 Stanford junior Ella Eastin was named the 2018 CSCAA Swimmer of the Year after winning three individual events and helping lead the Cardinal to a 1st-place finish at the 2018 NCAA Division I Championships.  Current photo via Tim Binning/TheSwimPictures.com

Stanford junior Ella Eastin was named the 2018 CSCAA Swimmer of the Year after winning three individual events and helping lead the Cardinal to a 1st-place finish at the 2018 NCAA Division I Championships.

Eastin, the only swimmer to win three individual events, kicked off her individual swims with an American, NCAA, and U.S. Open record in the 200 IM by almost a second. She then swam a huge American, NCAA, and U.S. Open record and 1-2 victory, touching ahead of second-place finisher (and former American record-holder) Katie Ledecky in the 400 IM. Eastin’s 3:54.60 obliterated Ledecky’s previous record by nearly 2 seconds. She then rounded out her individual triple crown tonight with a meet record 1:50.01 in the 200 fly.

While Eastin had an impressive week there were other swimmers whose performances likely received consideration. Simone Manuel scored four relay victories and two individual wins, including three relay American records in her final NCAA Championships. Lilly King swept the breaststroke events in record-breaking fashion, and led the Indiana medley relays onto the podium. Katie Ledecky scored a pair of incredible-margin wins in the 500 and 1650, which are only diminished on paper by her own mind-numblingly fast past swims. Kathleen Baker, last year’s CSCAA Swimmer of the Meet, set an American record in the 200 back, and coupled that with a second-place in the 200 IM and a third in the 100 back.

Winning time for 200 fly is 1.50.01…and some other facts are incorrect in the article. Please fix them Hannah.