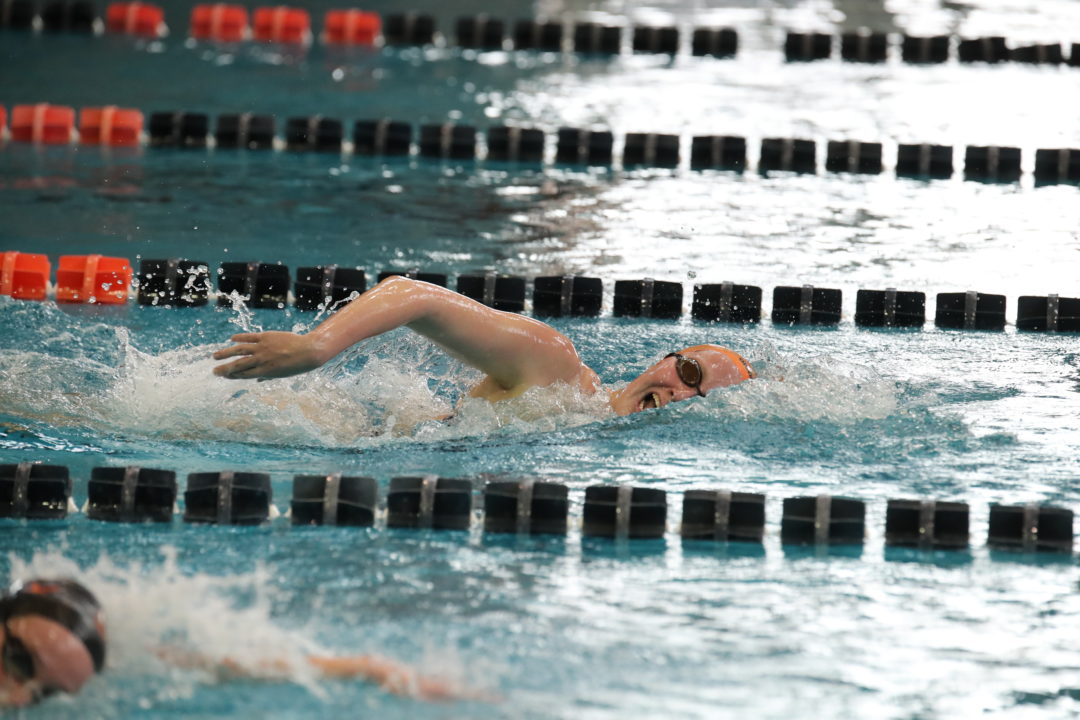 In a battle of ACC opponents, the Virginia Cavalier men and women each won against the UNC Tar Heels, with the men's outcome decided by the final relay.

The University of Virginia Cavaliers are on the road this weekend and taking on a pair of ACC opponents, swimming at UNC today and NC State tomorrow. In today’s action, the Cavalier  women (#1 in our last power rankings) took down the Tar Heels (HM) 174 to 121. The men’s side was closer, coming down to the final relay, but #13 Virginia held off UNC, 154-144.

Maddie Donohoe kept UVA moving along with a 10:21.01 victory in the 1000 free, although she was pushed by freshman teammate Quinn Schaedler, who touched just behind at 10:21.25. Donohoe would return toward the end of the session to complete the distance sweep with a 4:52.02 win in the 500 free.

Two other Cavaliers doubled up. Douglass won the 200 free by over 2.5s with a 1:46.51. In the second half of the session, she dropped a 2:08.26 200 breast, winning that event by over three seconds against a trio of teammates who all have been 2:06 or 2:07 this season. Virginia is nearing “2015 Texas men 100 fly” level of depth in this event, as they have four women who have been under 2:08 this season, plus Douglass, who went 2:05.89 at last year’s ACC Championships. It took a 2:08.42 to make the A-final at 2019 NCAAs, so the Cavaliers could conceivably put five “up” in this event. Of course, there’s no guarantee that all five women will swim it in the postseason; Douglass, for instance, also currently holds the fastest time in the nation in the 100 free.

UNC kept things from getting to out of hand by playing to their strengths, namely backstroke and diving. Grace Countie stopped UVA’s initial winning streak by taking the 100 back in 53.11, a time which appears to be her fastest in-season time ever. Sophie Lindner completed the Tar Heel sweep of that discipline later in the session with a 1:56.19 win in the 200 back, and Heidi Lowe added a 23.33 win the 50 free.

The Tar Heels’ lone individual double came on the diving boards, as Aranza Vazquez swept the two events with scores of 337.50/390.08.

With the meet in hand, Virginia left its strongest sprinters on the bench for the final event, the 200 free relay, and UNC took that in 1:31.46, getting a 22.72 leadoff from Countie and a 22.59 split on the third leg by Lowe.

It was a much closer race on the men’s side, as the two teams battled back and forth over the course of the session.

Brownstead put the Cavaliers back in the win column with a 19.91 in the 50 free, and UNC led 67-64 heading into the first break.

UNC kept piling up the points during the diving events, as Anton Down-Jenkins led 1-4 sweeps in both the 1m and 3m.

It turned out to be a day of repeat winners, as five of the six men who won events in the first half of the meet doubled up the second half.

CHAPEL HILL – The University of North Carolina hosted the University of Virginia at Koury Natatorium Friday night for the first home meet of the new year. The Tar Heels put up a tough fight but fell to the Cavaliers, the women falling 174-121 and the men by a narrow 154-144 margin.

“I’m extremely proud of our team and the way they competed today,” said head coach of the Tar Heels, Mark Gangloff. “Going into the meet, we talked about UVA being one of the best teams in the country. During our post-meet team meeting, I looked at our team and said to them, ‘If we can look over there and say they are one of the best teams in the country and we almost beat them, then why can’t we say the same about our team?’ Ultimately we can say that we are and that we can compete with almost anyone.”

The Tar Heel women finished the night with multiple podium finishes. Grace Countie placed first in the 100-yard backstroke (53.11), and Heidi Lowe and Brieanna Romney tag-teamed first and second in the 50-yard freestyle (23.33, 23.47). Similarly, Sophie Lindner and Amy Dragelinfinished first and second in the 200-yard backstroke (1:56.19, 1:59.41).

UNC’s women finished the night on a high note with a team of Countie, Lindner, Lowe and Romney finishing first in the 200-yard freestyle relay with a time of 1:31.45.

“I’m really proud of all of our divers tonight and this whole season,” said head diving coach, Yaidel Gamboa. “We are doing much more with less, and that’s what this unprecedented season is about. We had a lot of strong performances tonight, and the most exciting thing is that we still can and will do better.”

CHAPEL HILL, N.C. – The Virginia men’s and women’s swimming and diving teams swept North Carolina in a dual meet on Friday (Jan. 22) at the Koury Natatorium.

The Cavaliers opened the meet with the 200-yard medley relay team of freshman Reilly Tiltmann (Brookfield, Wisc.), freshman Anna Keating (Vienna, Va.), Douglass and freshman Alex Walsh (Nashville, Tenn.) recording a time of 1:38.04 to win by over a second.

Storch won the last individual event of the night, the 400-yard individual medley, by over two seconds. He swam a time of 3:50.97 to help the Cavaliers close the gap on the Tar Heels.

“Proud of our teams’ fight tonight on the road against a strong UNC team,” head coach Todd DeSorbo said. “We knew they would provide a great competition and our team stepped up to the challenge. The ladies stepped on the gas from the first relay and didn’t look back. The men had a battle down to the wire, coming down to the last relay. It’s a position our men have been in before so they know how to close a meet with great IMs and a finishing free relay. We had a lot of great performances overall. Not much time to think about this meet as we turn around and race at NC State tomorrow morning. Looking forward to another great battle!”

Virginia will return to action on Saturday (Jan. 23) as the teams head to Raleigh to face NC State in an 11 a.m. dual meet.

The tarheel men are definitely on the come up. A 7th place finish at ACCs last year and now on the verge of beating UVA. With their impressive 2021 class, I feel like they could be a top 3 team very soon.

While the Tarheel men fought great, you have to keep in mind that as teams are coming out of winter training, they might not be in the same place. UNC started classes this week, but UVA has another two weeks of nothing other than swimming

I’m assuming not, since it had the fly leg at 26-something, IIRC.

The fact that you’re even debating that time just showcases what we all think she can do.

Well, I know she’s not a sprinter was just making sure.

Probably not. Lexi Cuomo is a :51 flyer

So, I was going to go back and try to hand time it, but when I pulled up the meet video on ACC+ On Demand, it apparently is only showing diving. 🙂

Watch ESPN has the replay. First hour is diving, then the swim meet…..

You just need to go forward about an hour before the swimming starts.

For some reason, the ESPN app on my tv only showed three hours of diving; I scrolled through it all. But got it to work on my computer. Looks like Cuomo split about a 23.9 and Madden a 23.0, give or take a tenth each.