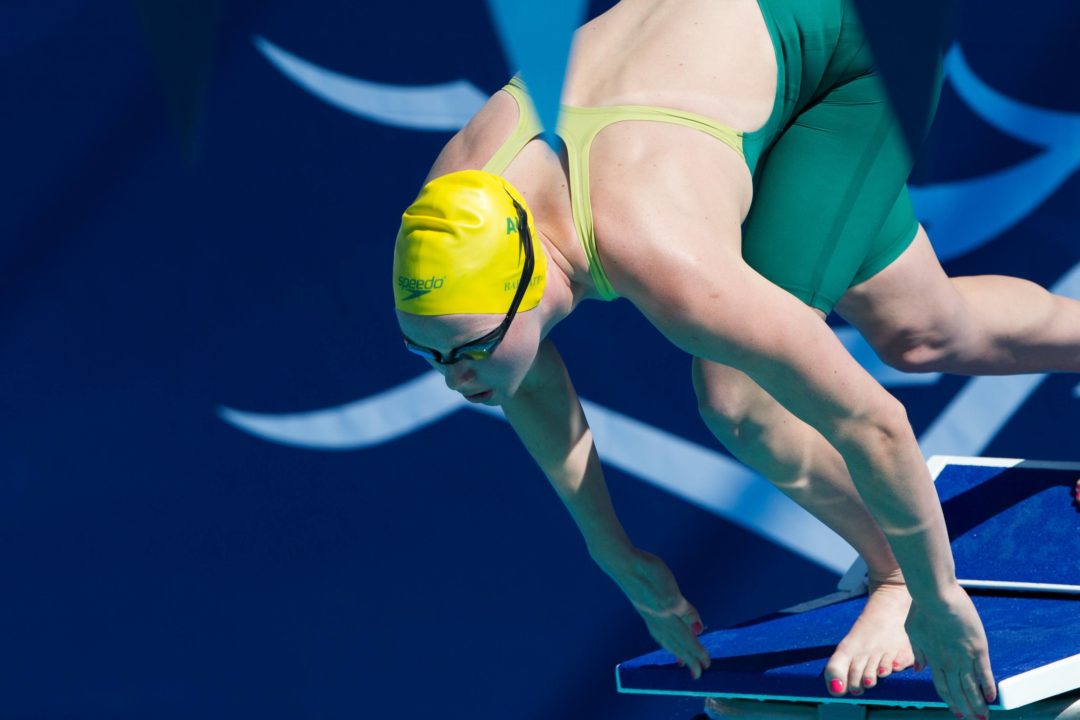 Competing against DI Navy and led by the powerful trio of Bogdanovski, Kitayama and Greenhalgh, the Johns Hopkins Jays posted some fast times in the meet on Wednesday. Unfortunately, it wasn't enough to overwhelm the Mids, and Navy triumphed, 137-123 (W) and 135-119 (M). Current photo via Tim Binning/TheSwimPictures.com

In what was a very fast meet last night, the Navy Midshipmen faced off against the Johns Hopkins Blue Jays and came out victorious. The women came out on top 137-123, and the men 135-119.

The meet opened with the 200 medley relay, going to JHU by over two seconds. Kitayama and Bogdanovski combined with Pilar Shimizu and Kylie Holden to put a 1:45.41 on the board. That’s blazing – it’s only a little off the time JHU put up in December, and by itself would rank this quartet fourth in DIII. Navy followed with a second place in 1:47.49.

Immediately thereafter, Bogdanovski was back up on the blocks, and swam a 1:53.13 to leave all competitors in her wake. Having already gone sub 1:50 in the 200 this season (1:49.09 in December), Bogdanovski is the top ranked competitor in DIII at this time for the 200 freestyle, so it’s unsurprising for her to be swimming fast in a primary event. However, given that a low 1:53 is just outside the top 16 range – it’s also serious impressive. More than two seconds after Bogdanovski finished, teammate Ellen Marcus came in second, just outtouching Navy’s Jessi Ford (1:55.31 to 1:55.87).

Later, Bogdanovski returned to the water to earn yet another win, this time in the 100 freestyle, courtesy of a 51.44. She took out the race almost two seconds faster than second place Olivia Morrell from the Mids (53.29) and finished just as strong.

Kitayama put up her own scorching time in the 100 backstroke after Bogdanovski’s individual debut. Her race was much closer, and it came down to the wall, where she out touched Navy’s Anna Brooks by a little over two tenths for the win (56.55 to 56.79). Just like her teammate, Kitayama is the top ranked individual in the 100 backstroke in DIII after December, and the only one in the event with an A cut, after having posted a 54.46, more than half a second faster than the next closest individual.

Kitayama’s return to the pool was another victory in the 200 backstroke. She was the only woman out under a minute at the 100 mark, and finished over three seconds ahead of her next closest competition to post a 2:03.27. Her best so far this year was a December time of 1:58.53 – a time that leads in DIII so far this year – but this dual meet time would still put her in the middle of the top sixteen pack.

After having a hand in the victorious 200 medley relay, Shimizu was back up on the blocks for the 100 breaststroke. She was out faster than the Mid’s Hanna Gillcrist, but couldn’t quite hold off her competitor on the backstretch. Gillcrist claimed first in 1:06.01, and Shimizu was runner up, interrupting what could have been a Navy sweep with her 1:06.83.

Rheanna Vaughn posted the winning time for Navy in the 200 butterfly, clocking a 2:04.22 for the gold. She was followed by teammate Rachael Dudley (2:05.56). Coming in third for JHU was Shirley Chan who posted a 2:06.72 – another B cut time and just outside the top sixteen rankings. Later, Chan also returned to the pool to post the winning time in the 100 butterfly, taking the win with a 57.43 to beat out both Vaughn (57.52) and Dudley (57.67). Johns Hopkins has proved repeatedly across events this year that they will be a force to be reckoned with come the Big Meet.

The Jays’ third individual win of the day came from Kylie Ternes in the 50 freestyle. Ternes – ranked seventh nationally in the event – had a very close race, just edigng out her competition by .04 to claim the victory at 24.40. Coming in tied for second at 24.44 were Mids Nicole Skaggs and Maddie Thompson.

In the final event of the day, the 400 freestyle relay, the Mids swam exhibition. JHU still was the fastest to the wall, with the team of Sarah Rinsma, Ternes, Jillian Liwacz and Bogdanovski posting a 3:30.63. Navy’s A finished at 3:32.00.

On the men’s side of the meet, the Jays were led by the redoubtable Andrew Greenhalgh who claimed two individual events over the course of the meet.

After Hopkins placed third in the 200 medley relay (1:33.50), Greenhalgh stepped up to claim top honors in the 1000 freestyle, posting a 9:23.58 to better his best swim so far this season (and in his swim career), as well as making a mark as the second fastest 1000 swum by a Jay in the school’s history (just .85 off the record). As it’s not an actual championship event, the rankings have less importance – but that time would also put him about a second away from the top ranked DIII athlete in the 1000, Drew Ledwith, who also is the top ranked miler in DIII currently.

After a streak of four wins accrued by the Mids, Lordi turned in a 20.86 effort to win the 50 freestyle, beating Riley Weber to the wall (21.13) for the victory, along with a B cut. Lordi’s best in the event is a 20.65 this season from December, which ranks him tenth in the DIII pool.

Then came the 500 when Greenhalgh returned to the pool for yet another individual victory. His 4:36.35 was over four seconds ahead of the next fastest swimmer. Unfortunately, points aren’t calculated by how much you beat the person next to you by. In the final events of the competition, Navy swam exhibition. As with the women, competing against exhibition did not keep the JHU men from being competitive.

Kogut posted a 51.03 in the 100 butterfly, the fastest time across the board. Holder put up a 1:53.08 in his 200 IM, also the quickest time by any swimmer in the pool. Finally in the 400 freestyle relay, the team of Lordi, Kimball, Acquaviva and Holdere posted a 3:06.58 to beat the fastest Navy squad (the C squad, interestingly enough) by almost two seconds.

JHU will be back in action tomorrow (January 31), facing off against the Mary Washington Eagles in Fredricksburg, VA at 6pm.