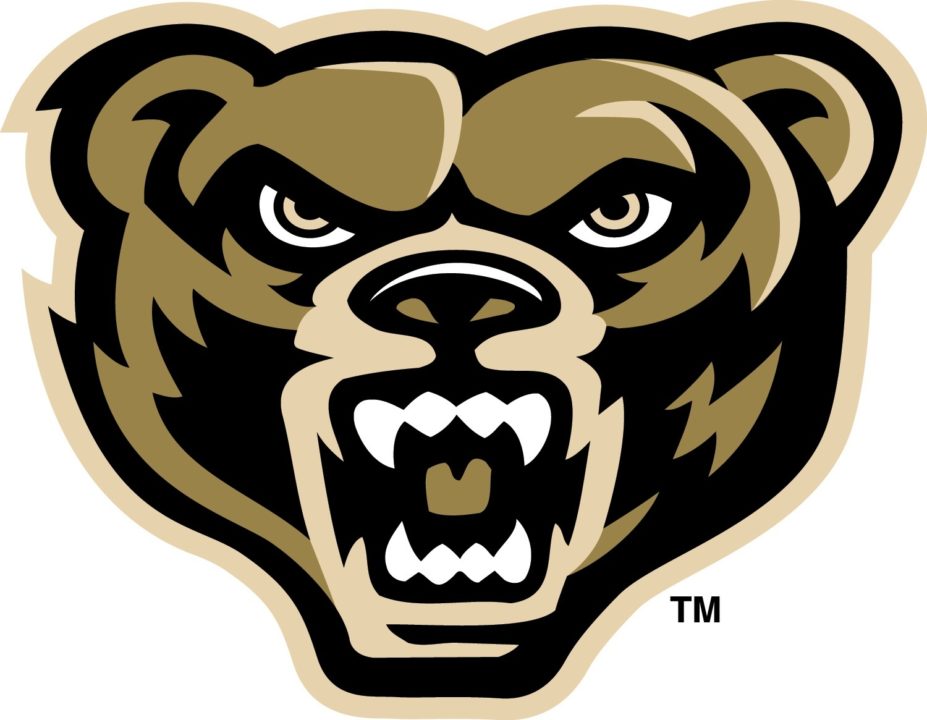 The Golden Grizzlies will then prepare for the 2014 Horizon League Championship Feb. 26-March 1 Current photo via Oakland University

ROCHESTER, Mich. – The Oakland men’s and women’s swimming and diving teams conclude the regular season for the 2013-14 campaign Saturday when the Golden Grizzlies challenge IUPUI at 11 a.m. at the IU Natatorium. Live stats will be available at the start of the meet here.

About Coach Hovland: In his 35th season on the OU campus, head coach Pete Hovland is in his 33rd year as the head coach of the Oakland men’s squad and 15th season as the mentor of the women’s team, including 13th consecutively. During his tenure, Hovland has been named conference coach of the year 21 times; he has also led the Oakland men’s team to 29 conference meet titles and the women’s side to 14 conference meet championships. Of note, Hovland’s 35 years as a head coach for Oakland swimming and diving is tied for second longest among current Division I head coaches.

Golden Spotlight – A Look Back at Oakland Swimming Success
With the induction of Oakland University swimming and diving alums Raffi Karapetian, Yoav Ritter and Danielle (Ward) Grey to the Hollie L. Lepley Hall of Honor Jan. 24, the Oakland swimming and diving team have an impressive 46 members in the athletic department’s hall of fame, which began back in 1984; a total that breaks down to 28 men’s honorees and 18 women’s inductees. Four swimming and diving teams have also been inducted into the Hall of Honor, giving tribute to the program’s long-standing tradition of success in competition.

Scouting the Oakland women:
•For the first time this season both an Oakland swimmer and diver earned weekly Horizon League accolades when Kyra Rietveld and Tricia Grant were selected, respectively. The honor was the first this season for Rietveld, while Tuesday marked the sixth weekly award for Grant.
•Emily Ludema and Patricia Aschan are among the top distance swimmers in the league this season, ranking in the top four in both the 500 and 1000 free races. Ludema also provides top times in the fly and IM, while adds strength in the back, fly and IM.
•Karin Tomeckova has three NCAA ‘B’ qualifying times after her stellar performances earlier this season. Tomeckova re-set both of Oakland’s 100 (53.66) and 200 (1:55.35) backstroke records Dec. 6.
•Oakland’s breaststroke specialist Takara Martin moved up the Oakland Top 10 ladders with a time of 1:03.90 in the 100 breast Jan. 25. Martin, Melissa VanderMeulen and Rachel Waite are among the league’s top 10 this season in both the 100 and 200 breast.