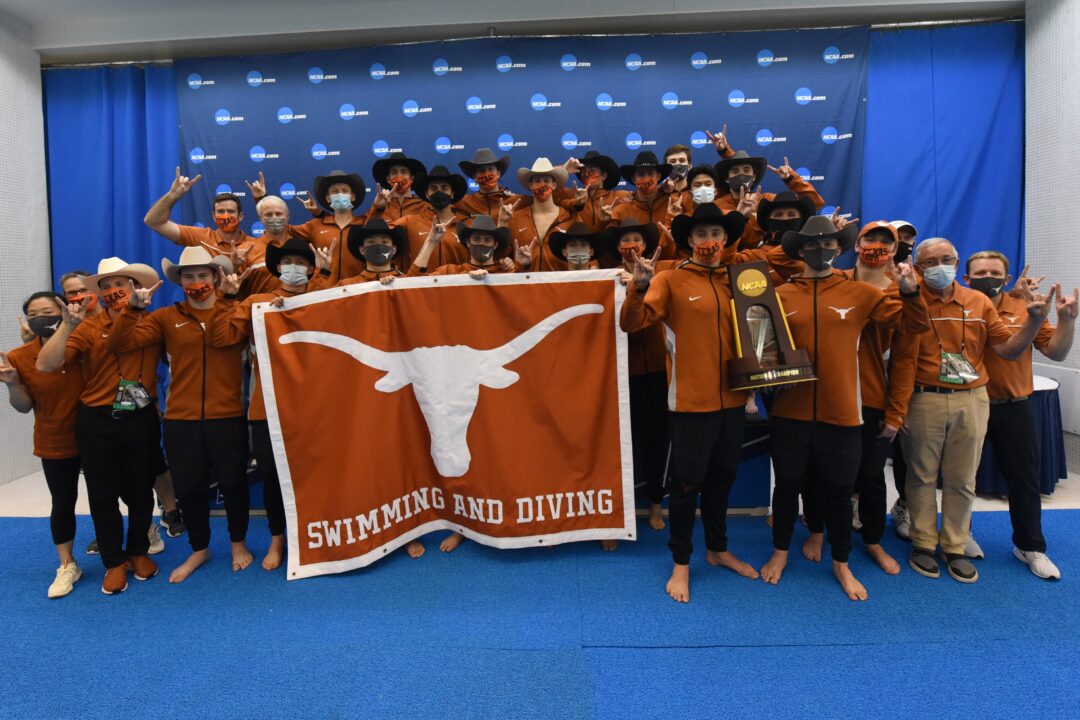 The College Swimming and Diving Coaches Association of America (CSCAA) have released their preseason poll, with very few surprises at the top, with Texas and Cal taking the top two spots. Texas received all 15 first place votes, while the Golden Bears received all 15 second place votes. Florida, NC State and Indiana round out the top five.

While some teams have begun competition, as the ‘preseason’ poll, pollsters were instructed to not penalize teams that have not yet competed.

Note: the CSCAA polls are designed to reflect dual meet strength, not necessarily a projection of NCAA Championship meet finish.

The Texas-Cal rivalry looks primed for yet another showdown at the end of March. At last year’s NCAA Championships, Texas edged out Cal 595 to 568, with both teams being over 200 points clear of third-place Florida.

The two team hegemony has been the dominant storyline of the men’s NCAA Championships in recent years, as Texas and Cal have been the top two teams every year since 2014. In that time, Texas has claimed five national championships, while Cal has won two. Since 2010, Michigan’s title in 2013 is the only time a team other than Cal and Texas has finished in the top two.

The biggest shakeup from last year’s NCAA results is the return of two programs to the poll that did not compete last season. The Arizona State Sun Devils, who redshirted their entire roster last year check in at 13th, while the Harvard Crimson, who return to competition after the Ivy League cancelled the 2020-21 swim season, rank 22nd.

I feel like swim swam must love getting to post these articles because every time people freak out over the rankings and how they won’t reflect NCAAs even though they are explicitly a dual meet ranking.

Interesting to look at the breakdown by conference –

I get that this is a dual meet poll & has very little meaning to the outcome of the actual season and can’t predict what will happen in March, I do think it’s interesting that the ACC has become **arguably** the deepest/most competitive conference in the country. I am a little biased towards the conference, but… Read more »

And when you look at the coaching staffs you’ve got now established big guns and hot up-and-comers. Gonna be battles at the top for years to come and wars to break into the top 4…especially if Sergio keeps sneaking in stellar internationals somewhat ‘under the radar’ until they pop at big meets

I wonder why stanford is 10th

You think they should be higher or lower?

When did Braden become part of the committee? That seems new to me. Big deal for increasing SwimSwam’s place in the swimming world though

I’ve been on the committee for a few years. This is maybe by 3rd year?

I had them at 25, so I agree on *a little* high, but remembering that this is a dual meet poll, they’re still deeper than a team like Penn State.

I was surprised that Arizona got as many votes as they did after the SMU Classic last weekend.

I was equally surprised that SMU didnt get any votes after the SMU Classic last weekend.

I had them in my first few out.

While they did beat Arizona, and while they’re definitely an improving team, if you compare them to those bottom few teams that did get ranked, those other teams are still just a bit deeper and have 1 or 2 more superstars to carry the load.

I agree that I’m surprised that Arizona got so many votes and SMU got none, given that SMU was well ahead of Arizona at the SMU Classic.

Wow. First positive reference (ever?) to NC State diving in SwimSwam comments. New dive coach is either a commenter (eh StateGuy?) or maybe he is starting the journey toward something eventually good on the boards in Raleigh

With their postgrads and incoming freshman, Cal should again get the most swim points. Texas diving is going to be much improved from last year. But I say we have no idea which team will prevail in March.

I really doubt that

Which thing do you doubt?

Cal swimming going for the four-peat.

Cal has Only won one time in the last 7 years. 4 peat only done by Texas.

I must not understand your comment because texas is definitely not the only school to have four peated.

Meaning in recent years… since “swimmer” is referring to Cal’s recent streak of 2nd place finishes.

How quickly you forget Cal came to Austin in 2019 and crushed the horns.

Are you talking about Cal going for a 2nd place four-peat?

Cal has out swam Texas the past four years. Texas diving has saved the day for the horns