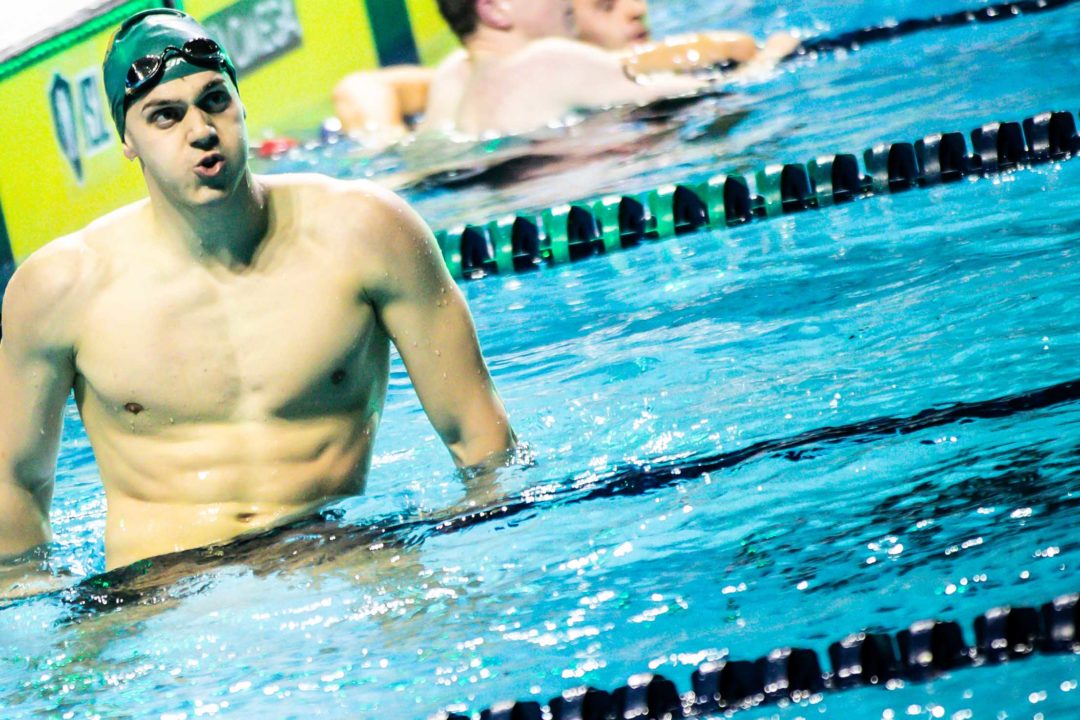 As Match 5 of ISL 2020 gets underway, London's Dean, Guy, and Hibbott will make their season debut, bringing a much-needed strength to the team's 400 free. Current photo via Jack Spitser/Spitser Photography

On the heels of a decisive victory, the LA Current returns for their third match in what will likely be one of the biggest battles for the team titles we’ve seen yet this season. The Current will be going up against Match 2 winners London Roar, Match 3 runners-up the Tokyo Frog Kings, the DC Trident who finished 3rd and 4th in Match 2&4, respectively.

While the two previous winners are the obvious favourites for contention at Match 5, the Tokyo Frog Kings were certainly a force to be reckoned with at Match 3 where they came within a mere 29.5 points from defeating the Current.

In Match 2, the London Roar was fast enough to take the team title and gets stronger today in the form of James Guy, Freya Anderson, Holly Hibbott and Tom Dean. The four British swimmers come in as strong additions to the roster and will look to improve upon on of London’s weakest spots at Match 2; the 400 free. At their last meet, London was third and sixth in the women’s 400 and they were sixth and eighth in the men’s. Three out of the four additions will race the 400 freestyle today with a shot to make up those lost points. Hibbott will join teammate Aimee Willmott in the women’s event as Guy and Dean take over the event for the men.

On the men’s side, Tokyo has a few notable absences in the sprint events. Ryosuke Irie won’t swim the 50 backstroke this morning and Shomo Sato is out of the 50 breast. For Irie, that’s actually the same call as in their first meet, however, it is more surprising this time around considering Irie’s second-place finish in the backstroke skins at Match 3, going all the way to Round 3 with Ryan Murphy. Sato finished 7th in the 50 breast at Match 3 and will be swapped out here at Match 5 with Vlad Morozov who will race the event along with Yasuhiro Koseki.

A third thing to note from today’s start list is that the Tokyo women have stacked their medley relay. This is a shift from the first meet where they split their team more evenly. Had they stacked their relay at the first meet, however, their top team would have won the event, giving them the power to select the stroke in which the skins event is raced.

As Match 5 gets underway, follow along here with our live recap and analysis.

Relays were a significant strength area for Roar in ISL1 but the loss of key AUS from this series looked to have pushed them well back in this aspect let alone areas like sprint FS. Wattel & Toussaint do, for the most part, cover the gaps in W FLY & BK left by McKeon & Atherton but the loss of C1, McKeon, Chalmers and Graham from their respective FR relays will be costly in meets against the peak teams.

Having said that, these returns DO strengthen their hand and should keep safe-ish from being jackpotted.

Wait, I thought this was about THE Dean (Farris)