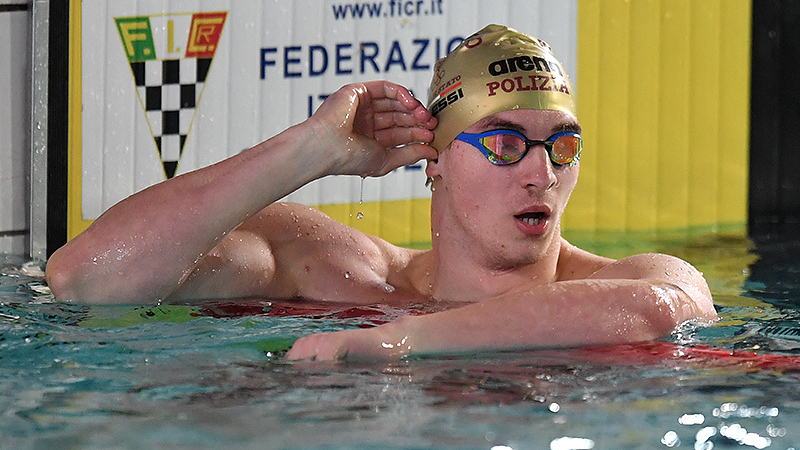 Alessandro Miressi was .05 off of Olympic qualification in that same event tonight after his COVID-19 contraction halted training for most of February. Current photo via Giorgio Scala/Deepbluemedia/Insidefoto

While several swimmers put down world top-five times this season, including Nicolo Martinenghi‘s historical 100 breast at the end of the session, no new athletes punched their tickets to Tokyo tonight in Riccione.

The Italian distance crew was out in full force tonight, as Gregorio Paltrinieri clocked a world-leading time in the men’s 800 free at 7:41.96 to come about two seconds off of his best. Simona Quadarella won the women’s race in 8:23.77, well off of her best but easily under the Olympic qualifying standard.

Federico Burdisso was another highlight, going 1:54.41 to miss his own Italian record in the 200 fly by .02, going well under the Olympic qualifying standard.

All four of the aforementioned swimmers went Olympic qualifying times, though all four are already holding spots on the roster as it is.

Alessandro Miressi was close to the 48.29 standard in the 100 free, coming just off at 48.34; he’ll have a chance to drop those several hundredths at the Sette Colli Trophy this summer. Meanwhile, he was easily under the cut for the European Championships, so he’ll at least have that meet this summer.

“I had Covid at the beginning of February and until the first week of March I was not back in the water,” said Miressi, who holds the Italian record in the 100 free at 47.92 from summer 2018. “So [I had] two and a half weeks of training to prepare for this race. In the water I felt good and I wanted something more but it didn’t come. Now we have to recover and keep working. It’s good that the European qualification has arrived.”

No Olympics for Santo Condorelli.

He’s trying to get added into the 200 free later in the meet. Figured he’d have an even better shot in that event.

Can they not qualify a 400 free relay?

Even if they add relay swimmers into the list, they might still not include Santo as he was 7th here.

June is his trials settle coli! Let’s give him some support

Italy has a great roster so far

Small roster but most have a decent to very good chance at a medal.