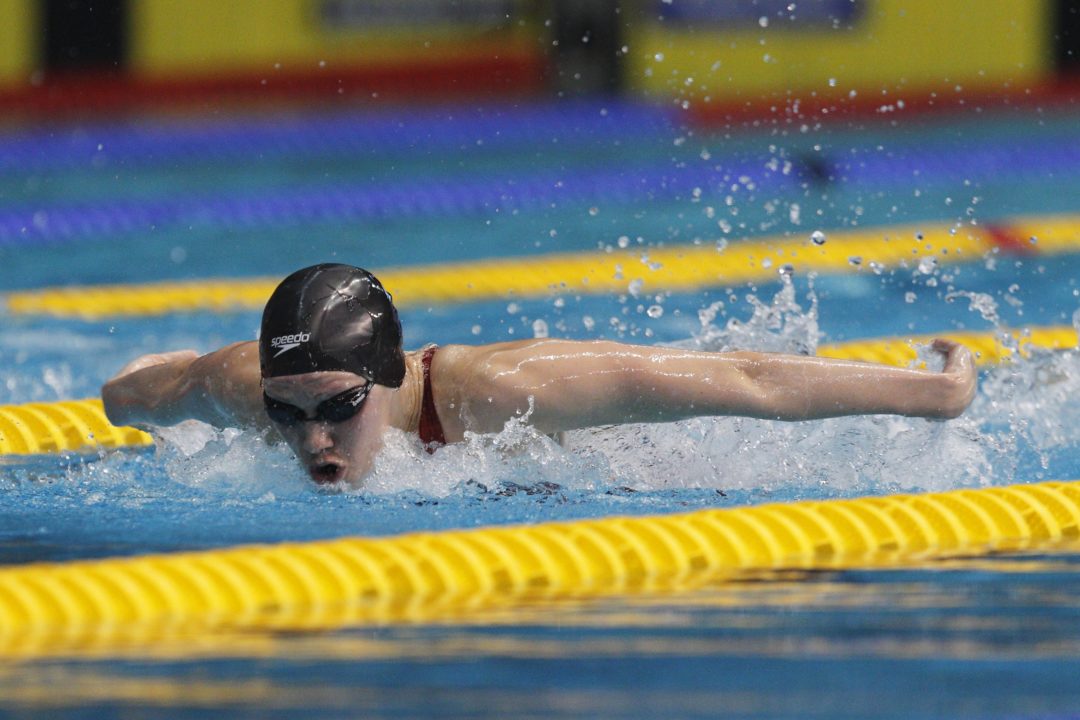 Picture of Jemma Lowe provided by (Photo by David Crawford / www.stillsport.com) Jemma Lowe won the 200 butterfly on the second night...

Jemma Lowe won the 200 butterfly on the second night of the British Gas National Championships in a time of 2:09.25 missing the British World Championships qualifying time by six one-hundredths of a second, but she made amends for that miss by winning the 100 butterfly in a time of 58.02 which is under the British qualifying time of 58.37. Her time is a season’s best by 55 one-hundredths of a second and is currently tied for the ninth fastest time in the world this year.

That will put her into position to be chosen for the team competing for Barcelona and with that swim will give the selection committee an opportunity to allow her to swim the 200 butterfly as well.

She was followed by Rachael Kelly who finished in a time of 58.49 and Tilly Gray who posted a time of 59.40.

Roberto Pavoni took the 200 IM in a time of 1:58.14, which is a personal bet time by 1.68 and is under the British World Championship qualifying time of 1:59.64. His time is the eighth fastest time in the world this year.

The women’s 100 backstroke was a great race between Georgia Davies and Lauren Quigley, who were separated by one one-hundredth of a second at the turn with Davies posting a 29.25 and Quigley posting a 29.26.

Quigley had the stronger second 50 by not by much, winning the event in a lifetime best of 1:00.07 followed by Davies who finished second recording a time of 1:00.13.

Both women finished under the British qualifying time of 1:00.43.

Jessica Fullalove finished third finishing in a time of 1:00.48

When watching the women’s 200 IM one usually expects to see Hannah Miley finish ahead of the field, but that was not the case at this year’s World Championship Trials. Siobhan-Marie O’Connor took the first 100 meters out almost a second and a half over the field. That changed in the breaststroke where Sophie Allen showed her strength and turned inside a second behind O’Connor and continued her surge in the freestyle overtaking O’Connor to win the event in a time of 2:11.34.

Proud continued to show incredible speed and incredible improvements during this weekends events. His time is almost a full second lower of his previous lifetime best of 50.48.

Michael Rock was the fastest qualifier by far posting a time of 51.99 which is just inside the world’s top ten. He was followed by Antony James who recorded a time of 52.72 and Adam Barrett who qualified in a time of 52.87.

Pleased for Lauren Quigley too – First and third in that race are ’95 and ’96 – Both heading rapidly towards breaking the 60 second barrier.