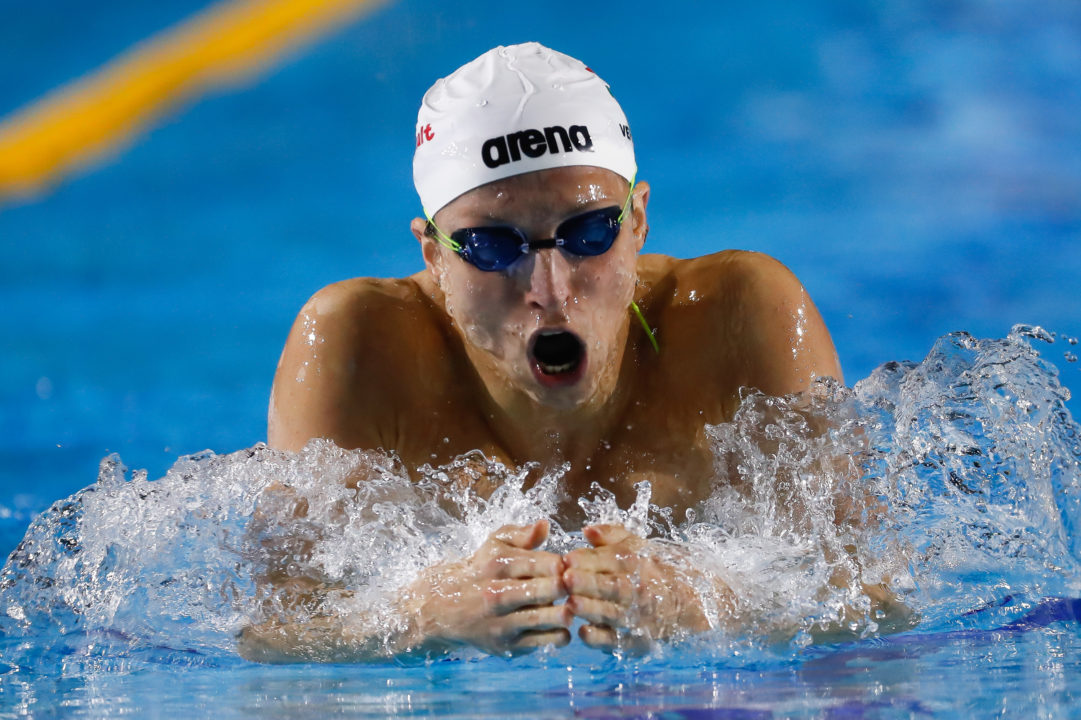 Hear what the medalists from Day 1 of the European Championships, including David Verraszto (pictured), had to say after their swims. Archive photo via Istvan Derencsenyi

The first day of the 2022 European Championships is over, with medals handed out in the men’s 400 IM, as well as the women’s and men’s 4×200 freestyle relay. Here’s what the medalists had to say after their swims.

Alberto Razzetti on winning gold in front of a home crowd: “My time is normal. It wasn’t that important, I thought I could go 4:09 but it doesn’t matter. The goal was to finish first at the end, the pressure was tremendous here in Rome, in front of our fans. I did it, I’m overjoyed. I know my rivals very well, I knew I had to stay close to them and stay focused for all the race. I did that, I gave my all and I’m really happy to open the championships with a gold.”

Razzetti’s lifetime best is a 4:09.91 from the Tokyo Olympics, within a second of the 4:10.60 he swam today. His 4:10 obliterates the 4:13.72 he swam to finish ninth at Worlds. His comments about the pressure he feels having these championships at home are especially interesting given that Federico Burdissio, his teammate, denied feeling any pressure at his press conference before the meet began.

Bronze medalist Pier Andrea Matteazzi also spoke about the significance of the meet being in Italy. “It was a strong emotion, this is the first medal for me, and to claim it at the Foro Italico in front of the home crowd, it’s really amazing. I did go for this medal as I saw I had a chance and it worked. I’m really satisfied, this time is something I knew I was capable of.”

The time also meant a lot to silver medalist David Verraszto. The 33-year-old Hungarian finished fourth at the Olympics, and in his press conference, he spoke about what coming back from that disappointment was like. “This is the reality today, a 4:15 in the morning, and a 4:12 in the afternoon, taken into account that in February I was off for the Maldives, had a fine vacation and weighed 85kg (now 69). There I decided that I still had the will to go on, even after the disappointing 4th place at the Olympics. Trained in Austria with my former coach, and after we managed to find the common path, the last two months were real workouts and over the final three weeks I felt that things are coming together. This time is a sign that it’s worth going on. After all, I managed to beat guys ten-fifteen years younger than me.”

The Netherlands won their first ever European Championships title in the women’s 4×200 free relay. On the win, Marrit Steenbergen said, “we are shouting out our happiness, we are very satisfied as this is our first medal in this event.
It’s long a time that we haven’t swum together so we are so glad to be together. We knew that we could get a medal, but there were seven more teams in the final and one can always better you. However, today we were the best ones. We are happy to win this gold.”

Steenbergen has been excellent for the Dutch relays this season, and she continued that here. Her 1:56.26 anchor was the fastest rolling start in the field. She dove into the water .10 seconds behind Great Britain’s Freya Anderson, but powered past her to secure the win by more than half a second.

Her teammate, Silke Holkenborg echoed what she said about the win. “It was unbelievable, a great surprise, it was special to win with this team. This is my first medal at the senior European Championships and now I hope to keep this pace in the individual events, in the 200m and 400m free.”

Anderson dove in for her leg with the lead, but the Brits ultimately earned the silver medal. On her swim, she said “oh, I started off too late. The girls worked really hard to put me in a very good position – though I’m still happy that we got a medal.” Her teammates Freya Colbert and Medi Harris echoed her comments about being pleased to earn a medal, with Harris saying “It’s our first real race and we are more than happy with it. We are happy that we are on the podium and got a silver here.”

For many on Great Britain’s Euros team this is their third big international meet of the season, with Worlds and Commonwealth Games taking place earlier this summer. Swimming at the Commonwealth Games wrapped up about a week ago.

Hungary’s Nikoletta Padar scratched the semifinals of the women’s 100 freestyle to focus on this relay. For the 16-year-old, “It was worth it to scratch the 100m free as it’s a fantastic feeling to win a medal with this relay. Ithink all of us give her best so we could land this medal.”

Her teammate, the veteran Katinka Hosszu, is twice her age. She touched on this, joking that she’s “the old lady on the team.” Hosszu went on, saying that she “checked with the girls, when I swam in my first junior Europeans, the youngest ones were not even born. I pushed too hard over the first 100m so I died for the second half – but the girls were awesome and I’m really grateful for them as they were fantastic.”

She did pay for it, splitting 2:00.62 on her relay leg and falling off the pace that the Dutch and the Brits set. However, the Hungarians finished comfortably in third place, three seconds ahead of Italy.

Hungary followed up their silver medal in the women’s 4×200 free relay with a win the men’s edition of the race. The team of Nandor Nemeth, Richard Marton, Balazs Hollo, and Kristof Milak were thrilled after their race. For Nemeth, “to swim again with the boys after Indianapolis was great at the Worlds but there we had less in the tank for the finals. Here we were all up to the task and we had Kristof at the end, first swim for him here, and it was just a blast. I’m proud of the boys, everyone brought his best to the pool this evening.”

Marton agreed, saying, “when we did that for the last time? In Indianapolis 2017? Man, I even forgot the date it was so
long ago. I’m so happy that after all I went through, that I almost quit, I’m here and achieved that. All of us had fantastic swims.”

Both Nemeth and Marton are referring to the 2017 World Junior Championships, which were held in Indianapolis, USA. There, this same quartet teamed up to win this same relay, out-touching the U.S. by .01 and setting a new world junior record. This swim reset their Hungarian national record of 7:06.27, which they swam in Budapest.

Like Padar, Hollo also focused on this relay over an individual event. He talked about recovering from COVID-19 post-Worlds, saying that “It was worth all effort after I recovered from Covid I had got at the Worlds. And it was the best decision to focus on this relay and let the 400m IM go as I couldn’t have prepared myself for that after the illness. This a fantastic feeling, we are really overjoyed!”

Milak brought the team home in a blistering 1:44.42, two-tenths faster than his split from Worlds. He downplayed his role, saying that, “it was easy to finish it off like this after my three fantastic buddies did a brilliant job.” He continued, “This was a
great race and we all feel great to win Hungary’s 100th European Championship gold medal in swimming. I think it’s more than fitting that a relay achieved that. Everyone took it very seriously and swim his maximum, and that brought us victory. Now we just need to carry on like this in the coming days.”

Milak is entered in the 100 and 200 freestyle at this meet and after this swim, it’s clear that he’s on form here, which makes speculating about what he’s going to drop in those events even more interesting.

Gabriele Detti seemed to feel the same way as Burdisso, saying after the Italians silver medal performance that “I’m really satisfied with opening this championship with a silver medal. I wasn’t feeling any pressure because of the home soil. For me, it was important to jump into the pool and have fun. We were even joking just before we came out. Stefano swam the last leg and did an excellent job. I’m more than happy, well begun is half done.”

At Worlds, Italy finished ninth, missing a spot in the finals. Stefano Di Cola acknowledged that this was a bounce back swim for them. “I’m really happy, we left the Budapest Worlds with a bitter taste. Now I’m really happy to be back on the podium as it was a very nice race. We are a great group of swimmers. The crowd carried me all the way.”

Lorenzo Galossi added that, “I’m sixteen years old so I was thrilled to swim with guys. We could have done better but even before Stefano did an excellent job when we were behind I wasn’t worried. I was sure he would make and put us on the podium. We are a great team, all very young and it’s an honour to be in this team.”

The French bronze medalists were also pleased with their swim. They were ahead at the halfway mark thanks to a strong first two legs by Hadrien Salvan and Wissam-Amazigh Yebba. Both Hungary and Italy passed them, but they still held on for a medal. Yebba said “We are very happy, this is was something we really wanted to do here. It was a real fight over the
last 100m and we were a bit scared. But Roman did well finally so we are really happy to end up on the podium.”

Enzo Tesic continued, saying that “this is a good first step for this relay. We were in advantage being in the central lane. Our goal was here to fight till the end and give our all which I think we did. I actually started my leg a bit too fast, I was really excited but then I just tried to maintain the gap with the others as much as possible to give a good position for our last man. The last 100m was just crazy, with the Swiss, the Italians and of course with Kristof Milak. We just crossed our fingers and at the end… we did it!”