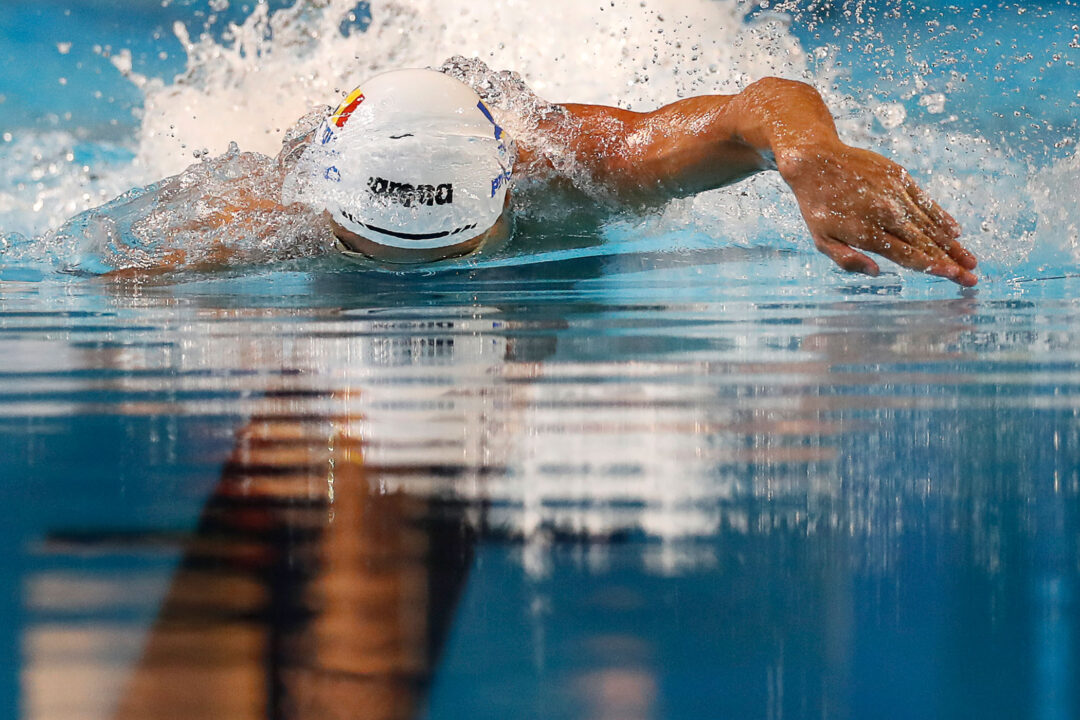 The 17-year-old 100 freestyle world record holder undercuts his own championship record, which he set at 47.37 leading off the prelims relay.

Popovici was actually out faster than his world record pace. In the European Championship final where he set the world record, he flipped at 22.74. Tonight in Lima, he did not come home as fast, splitting 24.35 compared to 24.12. However, he was faster than his prelims self by .22 seconds, which accounts for much of the time he dropped from prelims to finals.

The time also checks in as the ninth-fastest performance of all-time. Popovici now owns the most times in the top 10 performances list with 3, all of which he swam this year.

Popovici is also slated to race the individual 100 and 200 freestyles at the World Junior Championships. Prior to the meet, Popovici told SwimSwam that he was coming into the meet without any expectations, but it seems from his swims on Day 1 that he’s still on form after a busy summer.

The win itself was also huge marker for Romania’s relay development. They’ve never had a men’s relay qualify for an Olympic final, and only qualified one for a World Championships final. While they’re still off hitting either of those benchmarks, if they decide to chase them, their gold medal at World Juniors is certainly a positive step.

Does he even lift? Just looking at his physique compared to caeleb or Kyle. Just curious to know if he has a dryland routine and what that looks like?

Not really, he’s skinnier than other kids like Southam, Heilman, Coetzee, etc.

Did anyone else watch the 4x100fr final and think Popovicis technique was a little bit choppy compared to Rome? I know that sounds ridiculous to critique the WR holder but it was just my first impression. Maybe he’s a little jet lagged and not quite in rhythm yet.

I believe he only wanted to help out his team to win gold. He knew they needed at least 2 seconds on top to win gold and he did a 47 low for them. I believe he will take it slower in the individuals – no need for him to break other records in the Juniors. So I do not think we should have more expectations from him going forward. It is not reasonable.

How dense are results in the list of top 10 performances in M100FR. And there are 7 of 10 different names in this list from 5 countries. It may indicate that the “Project 45” is an illusion.
Quite a different situation is on women’s side where competition is not that much developed as is it is among men.

This is amazing, however I still actually think his 400 free prelims from Euros was the most fascinating performance he’s done so far. He literally was bathing from start to finish.

I’d like to know his BPM at the 200. I’m guessing a 1:51 for him got him at around a 120. I feel like if he knew he was going that fast he might’ve actually picked it up. Realllly doubt he was dying, judging by his tempo never slowed down…it never even really changed at all/his stroke rate didn’t either.

I think he’s just the new Thorpe. Thorpe went 48.1 in the 100 flat start and looked like he was trying really hard, but in the 400 he looked like he was floating and could take out his 200 in 1:49. He, and Popovici, just are natural mid-D swimmers who can do the 100 in world class/record time if they… Read more »

The Kyle vs Dressel conversation is basically over for Paris. Kyle is going to have to pull a serious PB to have any shot in Paris… which hopefully he can do if he can manage two years without injury interruptions and surgery.

Chalmers vs Dressel is still a battle, but for silver

16 (sixteen) men swam sub 48 this year alone, even without Kolesnikov, Minakov, Hwang, Scott etc. The sheer number makes the 100fr a game of jeopardy now. A slightly off heat swim and you’re out – No wriggle room anymore.

There is a lot of unknown too – What can Milak do if he chooses to swim it? How much time do the improvers Liendo, Pan, Burras and Grousset have to drop? Will Southam have the front end to compete by Tokyo? All that before we even mention the reliable Miressi, the imroving Dean and the potential of returning Russians at some point.

I wouldn’t be counting any chickens in the mens 100fr – It’s looking fascinatingly open behind Popovici.

They both really have nothing to prove. They had their time of domination and now it’s time for the wonder boy to take the throne.

Eh I think Kyle Vs Dressel could be still be a thing for silver or bronze. Also they could play best 2 out of 3 Olympic matchups.

I think if Chalmers stays fully locked in and injury free for the next 2 years he’ll be a serious threat to Popovici and the world record. It’s important to keep in mind that the last time we saw him race without interference from injuries was Rio when he was 18

Chalmers has been injured almost every year. It’s optimistic to think he won’t face a setback before Paris. I agree that he could be a threat to the world record in 2024 if he stays healthy, but that’s easier said than done. There would be a lot more WRs if every swimmer could stay healthy and live up to their potential. That’s often the hardest part in the end.

Both Chalmers and Dressel are probably pass beating DP or the WR. They both had good runs though. Both individual Olympic Champions with WRs so no shame.

A lot will come down to how they each manage prelims and semis, which involves some luck. Keep in mind, Chalmers only made the Tokyo final by a couple hundredths.

It’s interesting in the case of Dressel, as his LCM 100 time really is a “relative” underperformance when you look at his SCY record. A time conversion would say he should have been capable of a sub-47 or even a hypothetical sub-46 time. Unfortunately I don’t think he has another 39.9 100 y free in him, or even a low 47 LCM.

SCY converters are wildly inaccurate. Some people are just better at short course. Look at Dahlia who is an individual WR holder in SCM but basically had no individual success in LCM.

Don’t trust conversion tools. They are ways behind real data. Dressel was amazing because he was the best in the world among very good swimmers. I don’t think 39.9 is a 46.8 in LCM 100free.

I agree with the point that SCY to LCM can be wildly inaccurate. However, I do think that a 39.9 has got to be at least a 46.8 for “most swimmers”

The only thing Popovici has left to accomplish in the 100free now is to go to rhe NCAA for a season and break Caeleb’s SCY 100free record.

With his current (fine) start and (quite good) turns, there’s no way Popovici would break 40 in yards. His relative “speed” comes from not slowing down as much as others do at the end of the last 50m lap. Compare what Bowman said about Phelps’s fly: he just didn’t slow down at the end of those long, last 50m laps.

Yes, this is the explanation for his strength in LCM. The fact that Popovici has already improved a lot his start and turns since last season, and other improvements will come with training and natural development, makes interesting watching how he’ll perform also in SC at the peak of his career. Obviously he’ll remain always a LCM swimmer.

Changing of the guard!