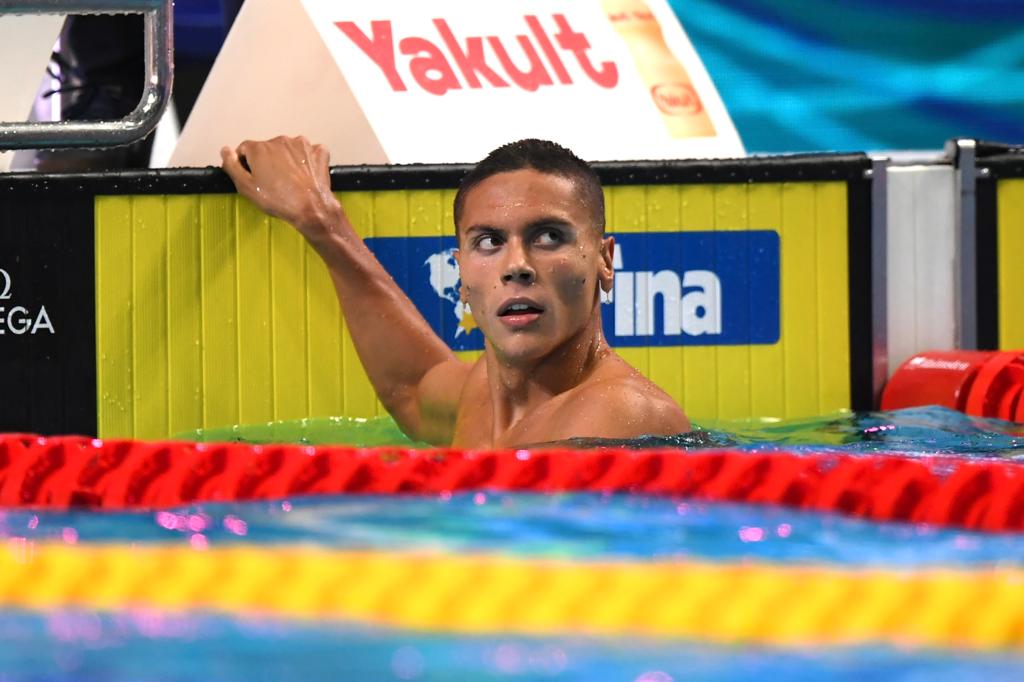 Romania's David Popovici set a new world junior record in the second semifinal of the men's 200 free on Day 2 in Budapest. Current photo via Fabio Cetti

In the second semifinal of the men’s 200 free on night 2 of the 2022 World Championships, David Popovici shot out at the start of the race and never looked back, clocking 1:44.40 to crack the world junior record. The previous record belonged to Hwang Sun-woo in 1:44.62, which he swam in heats of the Tokyo Games. Popovici scared the record in finals of that event, posting 1:44.68 to finish .02 seconds off the Olympic podium.

The split that sticks out is Popovici going out sub-24 in Budapest, as neither his previous self or Hwang opened their races that fast. You can see that he paid for it on his last lap, as he was 27.15 compared to the 26.71 he closed with in Tokyo, a .44 second difference.

Compared to Hwang’s former record, Popovici opened and closed faster in his semifinal race. This implies that Hwang also paid for his early speed, as his middle 100 was faster than either of Popovici’s.

Hwang swam in the first semifinal and qualified through to the final in third. He seems to have changed his race strategy somewhat, as he opened in 24.55, but came home faster than Popovici in 27.06. The two will go head-to-head in the final tomorrow night, so it will be interesting to watch how their strategies compare. Given Popovici’s last 50, keep an eye on whether he opens the final sub-24 again.

Both Popovici and Hwang have set themselves up well for a chance at a medal tomorrow night. If either of them medal, it will be their first long course World Championships medal.

I think it will be Popovici, Dean and Hwang on the podium tonight (not cofident in the order though). Winnington, Martens and Aubock will have 800free heats in the morning and that would very much affect their performance in the evening.

Those that haven’t, come aboard ChlorineDaddy hype train. The train will soon depart to the next station: GREATNESS

I made a little spreadsheet of the individual men’s true WJR records just before tomorrow. Let me know if there are mistakes because I might have the right people but certain times wrong.

You can only set WJRs in the year that you turn 18, or earlier.

Good, that makes it easier 🙂

I haven’t checked the other 18 yo swimmers.

MA’s time was from junior worlds

Thorpe also used a full bodysuit I recalled. He pioneered the thing if I ain’t mistaken. Not sure if it was technically a “supersuit” but it is not legal under 2010 or later FINA rules.

If it provided any advantage, then why didn’t any other swimmer used it.

Notice how none of any 2008/2009 supersuit used full cut that cover arms even when it was allowed.

Also, all of other suits cut (that covered legs and upper body) worn by other swimmers also were made illegal since 2010

I wasn’t a full believer in Popovici last year. He wasn’t taking it out fast enough. Rallies are for suckers. The vast majority of international swimming and track championship races are won from the front end. Plus he looked somewhat unrefined and thin…getting lost in the wake.

Now Popovici is considerably smoother and taking it out faster. The winning combination. Also he doesn’t look particularly impressed with himself, just like McIntosh after settling for silver.

Hwang was all over the place last year. He was obviously very talented but I didn’t know what to expect from race to race in terms of strategy. I’d guess the new coach made that a priority. Now we’ll have to see how he adapts… Read more »

The beauty of the 200 free is that there is no one set way to swim it. The three best male 200 freestylers this century (Thorpe, Phelps, Agnel) all had sensational back halfs, swimming relatively conservatively at the start.

And yet two of them (Thorpe and Agnel) have been vocal in encouraging others to take it out faster.

this kid is something special. I agree with AnEn, I’m predicting a 1.43.5-1.44.0 as well. He looks to have a little left in him. Did anyone notice his streamlines into and and out of the turns, I think he has some room there. Where he compensates is that incredible strength through his long stroke, and sitting so high in the water. At this stage in his development he is not as smooth as Thorpe/Agnel/Phelps at their best 200m free, but he looks like he can drop under their PB’s in time. I think he’ll take Thorpe and Phelps (textile) PB’s tonight.

Our boy is looking yoked in that pic.

My prediction would be that he will be somewhere between 1:43.5 and 1:44.0 tomorrow, but with him it is almost impossible to tell how much he has left. Anyways i don’t see anyone challenging him. I think it will be Popovici for gold and then Dean/Hwang/Winnington/Auböck for silver and bronze. My prediction was Popovici ahead of Dean and Hwang, but i think Auböck deserves a medal at some point, so hopefully he will do it tomorrow. I don’t really see the two americans or Märtens fighting for a medal.

A lot of people predicting a 1:43, but does anyone think he can break the WR?

Long-term, tough to call at this point