David Marsh Out At SwimMAC 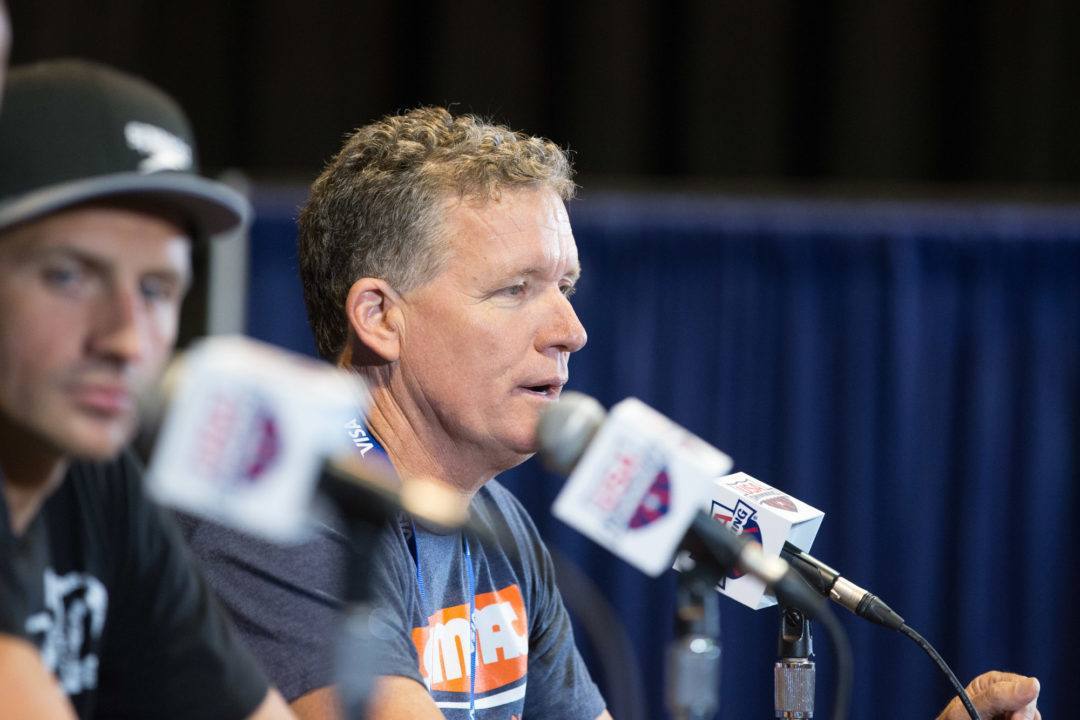 Olympic head coach David Marsh is parting ways with SwimMAC, the club he's led for the past decade. A joint statement from Marsh and SwimMAC termed the move a mutual agreement to "part ways." Archive photo via Tim Binning/TheSwimPictures.com

Olympic head coach David Marsh is parting ways with SwimMAC, the club he’s led for the past decade. A joint statement from Marsh and SwimMAC termed the move a mutual agreement to “part ways.”

That’s according to a report from The Charlotte Observer today. SwimMAC gave the statement to The Observer Wednesday night, noting that the separation would be “effective immediately.”

Marsh was the women’s head coach for Team USA at the 2016 Rio Olympics. He’s coached one of the nation’s most prominent professional groups at SwimMAC, while also serving as the head coach and CEO of the North Carolina-based club. The club announced he’d be stepping back from the CEO and head coaching roles earlier this year, and would be working to “redefine” his role with the club.

Marsh hasn’t yet commented about his future plans (UPDATED below with a statement from Marsh’s camp), but indicated to The Observer that he’d have more information in the next few days. The Observer also reports that Marsh plans to continue coaching in the Charlotte area and plans to keep coaching the Team Elite program out of Queens University.

The Observer report suggests that Team Elite, which houses SwimMAC’s sizable pro contingent, could be splitting off from the SwimMAC club, perhaps free to move elsewhere in the country along with Marsh. At the moment, though, the group appears set to stay in Charlotte.

Update: Marsh and Team Elite have provided a statement. Their full press release is below:

David Marsh, 2016 Head U.S. Women’s Olympic Swim Coach and 10 years the CEO and Director of Coaching for SwimMAC Carolina, and the SwimMAC parent Board of Directors have reached an agreement to formally end their relationship.

Coach Marsh led SwimMAC to unprecedented levels of improvement and success during his tenure. The 18 & under program went from a mid-level club to one of the best and deepest USA Swimming teams in the country, staking claim in the Top three of USA Swimming’s Club Excellence Program for the last five years. At the age group level, Coach Marsh implemented a technique focused program that has now become the model for countless teams around the globe. Marsh was named USA Swimming’s developmental Coach of the Year in 2013 and 2014.

At the Senior and Elite level, Coach Marsh established and created the first USA Swimming Center of Excellence, now known as Team Elite. While medals are the goal for Team Elite in the pool, the highest calling for a Team Elite member is to be a great role model for young swimmers and other age-group swimmers throughout the community and LSC.

In 2016, Marsh placed more Olympians on the U.S. Olympic team than any program in the country, with Marsh leading the entire U.S. Olympic team to the most medals in modern history. If Team Elite were a country, they would have placed 3rd in the medal standings, putting Charlotte on the global swimming map.

Select highlights for SwimMAC under Coach Marsh’s leadership include:

Coach Marsh commented, “I am extremely proud of the program we have developed over the past decade. My goal when I moved to Charlotte from Auburn University was to elevate the club swimming experience by establishing a Post-Graduate Training center that would serve as an inspirational and tangible experience for thousands of youngsters in the Carolinas. I also have valued many of the coaches that have faithfully and patiently employed this program to turn it into a true comprehensive “big club” model for our great sport. It has been great to grow my own family and the SwimMAC family during the last decade.”

Says Huntersville Mayor John Aneralla, “Coach Marsh has elevated the swim community in the north Meck area to unparalleled heights. His expertise and innovative approach to coaching swimming has improved the environment for swimming for years to come. However, most importantly, he and his family have integrated themselves throughout the community creating a lasting legacy beyond the swimming pool.”

Marsh’s Wife, Kristin has also greatly impacted the local swimming community by starting and developing the Pine Lake Preparatory Swimming, as well as the Track and Field programs. She recently won the All-Divisions Coach of the Year award for North Carolina. David and Kristin are proud to have spent many years raising their children in the area: Aaron, a Junior at Queens University of Charlotte, Alyssa – Sophomore Swimmer at Duke University, and Maddie a Junior in high school at Pine Lake Prep.

Coach Marsh’s immediate plans include leading Team Elite and its national caliber athletes to the USA World Championship Trials and subsequent FINA World Championships in Budapest this summer. Marsh will also launch his first ever clinic, consulting, and lesson program, bringing his talents to those beyond the athletes at MAC. Team Elite and Marsh will be launching their first clinic on June 9th – 11th in Charlotte. Please contact Amy Kosofsky below for additional details.

Could he be moving back to the SEC?

Marsh at Dynamo would be a terrible fit. David only wants to coach pro’s. Being a head coach/CEO of a large multiple site team that operates as one cohesive whole is a difficult job. One that David has shown he cannot do. Marsh nearly ruined SwimMac financially by using club resources to support team elite, as well as expanding the coaching staff to an unsustainable size. The team barely survived the budgetary hole David put them in. Don’t get me wrong he is one hell of a coach, but he isn’t interested in the day to day management that being CEO of a team like Dynamo entails.

Y’all know he was HC at Dynamo at one point, don’t you? Does anybody on here REALLY know DM like those close to him? Most likely not.