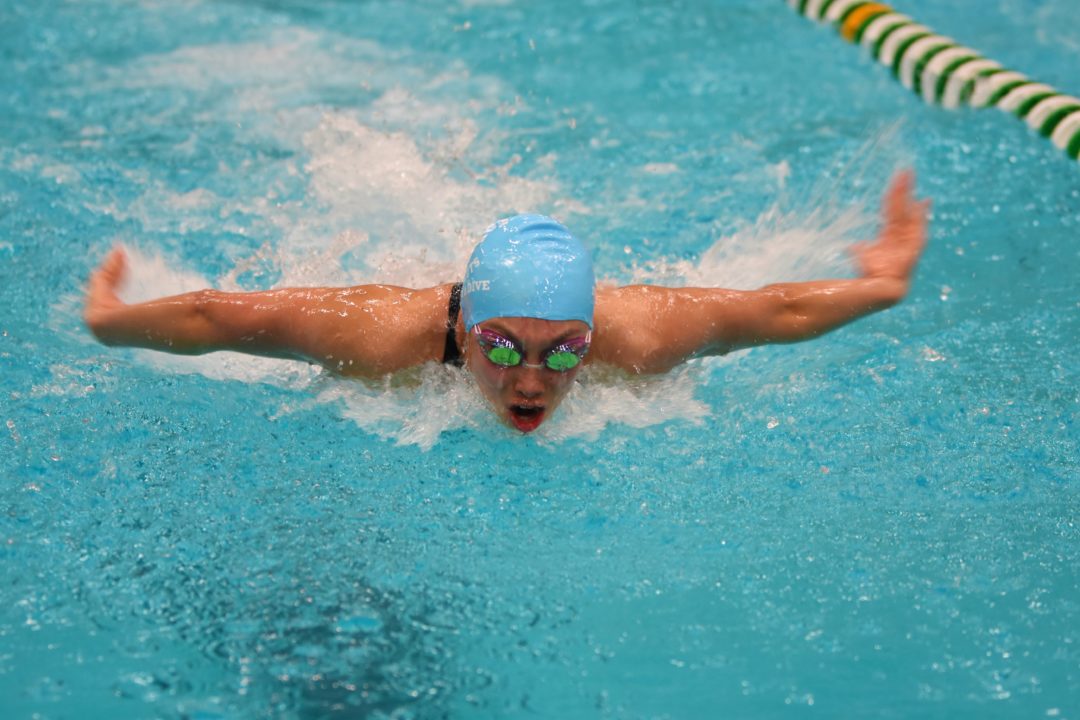 Curzan went a 59.3 100 back, Huske a 24.4 50 free and Curzan tied Huske in the 50 free final (but was shortly after disqualified for a 15-meter violation). Current photo via Christine Burgeson

Claire Curzan of the TAC Titans was responsible for the first eye-popping swim of the night in Cary on Sunday, blasting a 59.37 lifetime best in the 100 back to move to #4 all-time in the 15-16 age group and tie for the #12 performer slot in American history. Her time also jumps her to #5 in the world this season, just ahead of World Record-holder Regan Smith.

The second huge swim came shortly after, as Torri Huske of Arlington Aquatic Club took down Simone Manuel‘s 17-18 NAG record in the 50 free to go 24.44, making her the #6 U.S. performer ever and the #9 performer in the world this season. Curzan tied Huske with a 24.44 of her own, but was DQ’d for a 15-meter violation. Read more about the race here.

Justin Ress of Wolfpack Elite picked up a season-best in the 100 back, swimming to a two-second win with a 53.30. Ress’s old season-best was a 53.37, which had him at #8 in the world this season (though this doesn’t move him up any places).

Wait wait wait… hold on one second. Did Tori and Claire tie in both prelims and finals in the 50 free? I understand that Claire was DQ’d but that is beyond amazing.

Can we get some interviews with them?

2
0
Reply
Covid is not Gone

Also off topic; why did the event winner interviewer man wear his mask below his nose for the first 3 days and then not wear one at all one the last day? He stood very close the swimmers and shared his microphone with them. Glad to see that the swimmers were smart enough to be wearing theirs.

I apologize for being off-topic but….

Dear SwimSwam and fellow commenters, my dream requests are: