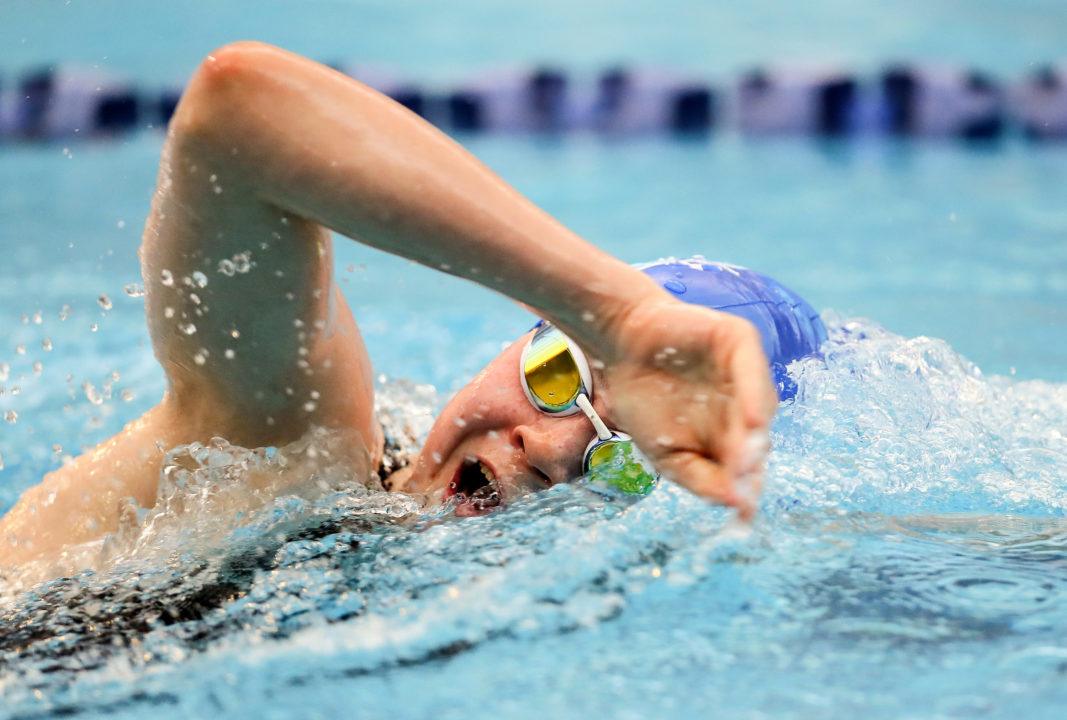 Despite an overall quiet day at the competition, 16-year-old Brearna Crawford picked up her 4th national age record in as many days in the 100m breaststroke last night at New Zealand Age Championships. The record marks yet another World Junior Championships qualifying time. It also would’ve put her in a final at the 2017 champs – her 4th event that has achieved this mark. Her final time was 1:09.98, a lifetime best of 0.83 seconds. Her last event is the 200 IM tomorrow in which she will have to drop just over a second to pick up a 5th New Zealand record.

15-year-old Erika Fairweather continued her form, picking up her 5th gold medal of the meet in the 400 IM in a dominant 16 second win (4:54.67). She went on to pick up a 6th gold in 200 back in a 2:21.10. While neither of the times were World Junior Championships qualifying times she is already sitting comfortably to make the team with 3 qualifying times recorded at the meet. Her last events are the 400m freestyle and the 200m IM. Her 400m freestyle is her strongest race – she blasted a 4:13.55 at Junior Pan Pacs last year to take 4th and based on her form at this meet so far a new lifetime best is definitely not out of the question.

Following their impressively close 100m backstroke on Day 1 the 18-year-old pair of Zac Dell and Thomas Watkins went 1-2 again in the 17-18-year 200m backstroke. However this time Thomas Watkins took the victory convincingly hammering home a 2:00.16. Dell followed in a 2:02.76 with both times being comfortably under the World Junior Champs qualifying mark of 2:03.84. Both are set to race tomorrow in the 50m backstroke with Watkins the favorite off entry times. Also picking up a World Junior qualifying time was 18-year-old Quinton Hurley in the men’s 1500m freestyle. Hurley took a dominant win blasting 15:46 to pick up his first qualifying mark for the meet.

In terms of club points, at the end of day 4, North Shore still reigns supreme with 1518.5. United have widened the gap over 3rd place Howick and Evolution Aquatics and Capital round out the top 5.

The meet will close out tomorrow with key events including the men’s 100m freestyle – where NZ record holder Michael Pickett will be looking toward a sub 50 swim. The women’s 400m freestyle will feature Fairweather as mentioned prior and World Juniors qualifier Eve Thomas who will be looking towards a New Zealand age record – her time sits just 0.23 away from the current mark. In the 200m IM, World Junior Champs qualifier Luan Grobbelaar is entered on a 1:57.22 which would demolish the current New Zealand open record but is likely an error. He will however be one to watch in the event regardless – the 17-year-old record of 2:02.44 by Olympian Bradlee Ashby is definitely within reason. Other potential records to watch for include the women’s 16-year and 18-year 200m IM, the men’s 15-year and 16-year 50m backstroke, the women’s 18-year 50m backstroke and the men’s 16-year and 17-year 100m freestyle.