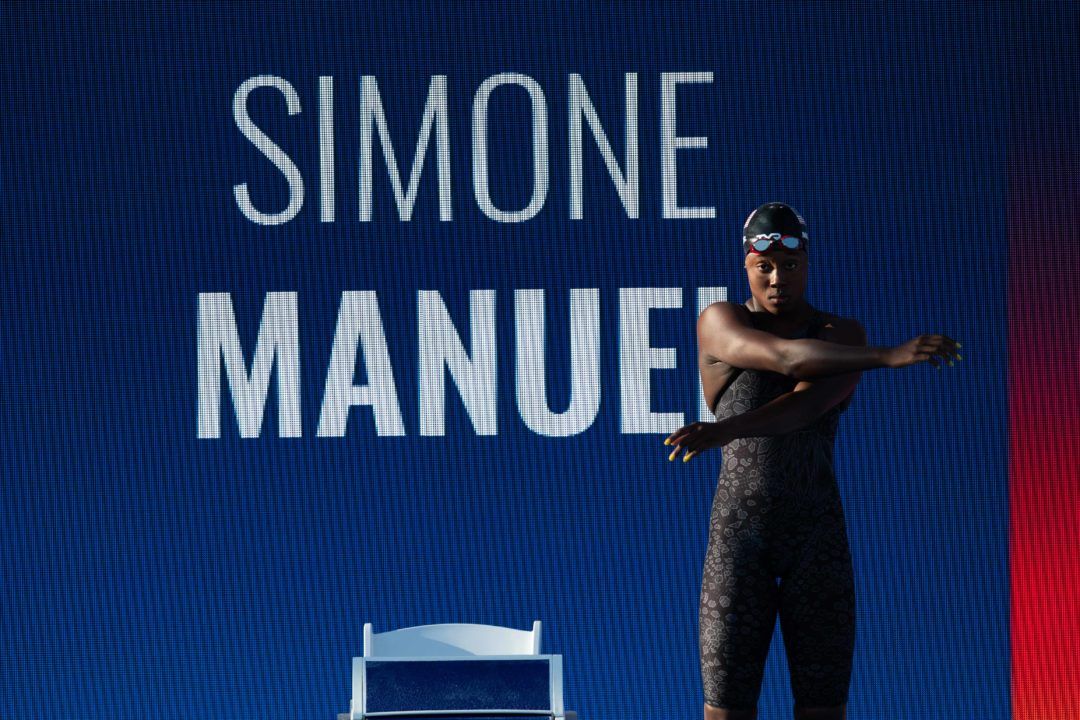 Olympic champion Simone Manuel closed a sponsorship deal with Nike last month, continuing to align her personal brand with companies that allow her to publicly push for social justice causes.

“Equality and access to opportunity are themes that certainly factor into my advocacy work, and to me, I think Nike has made it clear where they stand on those issues,” she told SwimSwam via email. “It’s important to me to align with brands and organizations who share my values, so it’s also why I have partnered with the USA Swimming Foundation — to help welcome more people of color into swimming and reduce the risk of drowning, and also why I have joined the ALS Association to help raise awareness and funds around the disease and important, yet often under-funded efforts to find a cure.”

Manuel, who turned professional at the conclusion of the 2017-2018 NCAA season, already has a suit deal in place with TYR – the Nike agreement is exclusively for footwear and apparel, while TYR is for performance swim gear and accessories.

SWOOSH – sound made by moving swiftly through water. Excited and blessed to be a part of the @nike Family! #JustDoIt pic.twitter.com/cBxSimEfG8

With her July TYR signing, Manuel became what’s believed to be the first professional athlete to put an “inclusion rider” in her contract. Inclusion riders are a growing trend found primarily in the entertainment industry that, generally speaking, are stipulations included in an individual’s contract that require cast and crew on a set to meet a given level of diversity (this might entail a certain number of women, people of color, LGBT people, or people with disabilities). Manuel declined to disclose the specifics of her Nike contract.

But she has dreamed of becoming an official Nike athlete since she was young, the 23-year-old Manuel said.

“I am deeply committed to supporting people in doing what they are passionate about. I believe that Nike values that just as much as I do. They encourage people to step outside of their comfort zone to achieve their wildest dreams. We are bold and audacious, and their commitment to innovation and driving culture inspires me.”

While it’s not entirely unprecedented for swimmers to sign an apparel deal in addition to their suit deal – Michael Phelps, for example, has a major contract with Under Armour in addition to Speedo – it is somewhat unusual. But in her joining Nike, which at one point had a line of tech suits that have since been discontinued (Cullen Jones and Aaron Peirsol, among others, signed their first suit deals with Nike), Manuel sees an opportunity to expand swimming’s reach.

“I partnered with Nike because it’s a unique opportunity to hopefully bring in a broader audience to the sport of swimming and introduce the sport to those who might not have imagined themselves as swimmers,” she said. “I am honored to be a part of Nike, having always admired how they have told the stories of their athletes and encouraged individuality. They celebrate difference, they embrace athletes’ visions, and they inspire people to go after their hopes of dreams.”

Nike sponsors hundreds of athletes, but its current list includes tennis great Serena Williams, track and field’s Caster Semenya, NBA star LeBron James, and perhaps most prominently as of late, former San Francisco 49ers quarterback Colin Kaepernick. Those athletes’ involvement in both Nike’s EQUALITY campaign and headline-grabbing 30th anniversary “Just Do It” campaign “solidified” Manuel’s feeling that she and the brand were a good match.

And in general, Manuel and agent Lindsay Kagawa Colas – who is known for her work in furthering women’s equality in sports representation and quite literally defining the market for WNBA players – are looking for ways to make an impact.

“When looking for potential endorsement deals, we look for partners who hold the same values as  I do,” Manuel said. “[Kagawa Colas] challenges me to think outside the box and think differently when looking for potential partners. We are focused on impact, and I would like to serve as an inspiration to others and use my platform to spread a message of inclusivity and uplift others. Through that, we plan to strategically partner with brands that share that goal.”

Manuel won four medals at the 2016 Rio Olympic Games and became the first black woman to win gold in swimming with her 100 free victory. She has an additional seven FINA World Championship golds to her name, and is a six-time individual NCAA champion, helping the Stanford Cardinal to titles in 2017 and 2018.

I hope she included in the “Inclusion Rider” the provision to pay decent wage for those slaves..err sorry.. labor that make Nike products.

Or maybe those slaves…err sorry again, labor, don’t deserve to be “included”

I am glad they sponsored Colin and now Simone. My problem is with how they do business. Making stuff overseas as cheaply as possible overseas then selling it for crazy high prices in the USA. I won’t buy their stuff and don’t believe in supporting their brand

what other brands don’t that??

So I gather you don’t buy much.

Her PR is a lot of cliches, though the words were probably written for her. It’s kind of boring and trite to hear and read about “thinking outside the box and focusing on impact.”

She’s a great swimmer and seems like a quality person, so the top sponsors will want her to be part of their promotional efforts.

I don’t think it’s boring to read about at all. And maybe top sponsors want her to be a part of their promotional efforts because they share her values. She’s a breath of fresh air in many ways. Congratulations Simone on your partnerships.

As soon as Nike would like to help bring back men’s and women’s swimming at the University of Oregon I would consider purchasing swim gear from them. They have the means to do so.

She absolutely deserves it.

Not unusual for Nike to sponsor swimmers. Ariarne Titmus is sponsored by Speedo and Nike in Aus.

Really? Who are the other US swimmers sponsored by Nike (since they discounted their competitive swim line)?

Yeah, if we can only come up with 2, I’d say that’s still pretty unusual…I don’t know of any other Americans. None came up in our research for this story.

Unless we count this “whoops” by Phelps in 2016 – https://www.chicagotribune.com/sports/international/ct-michael-phelps-under-armour-nike-si-20160818-story.html