Conger v. Schooling Matchup in the Cards for Texas Invite 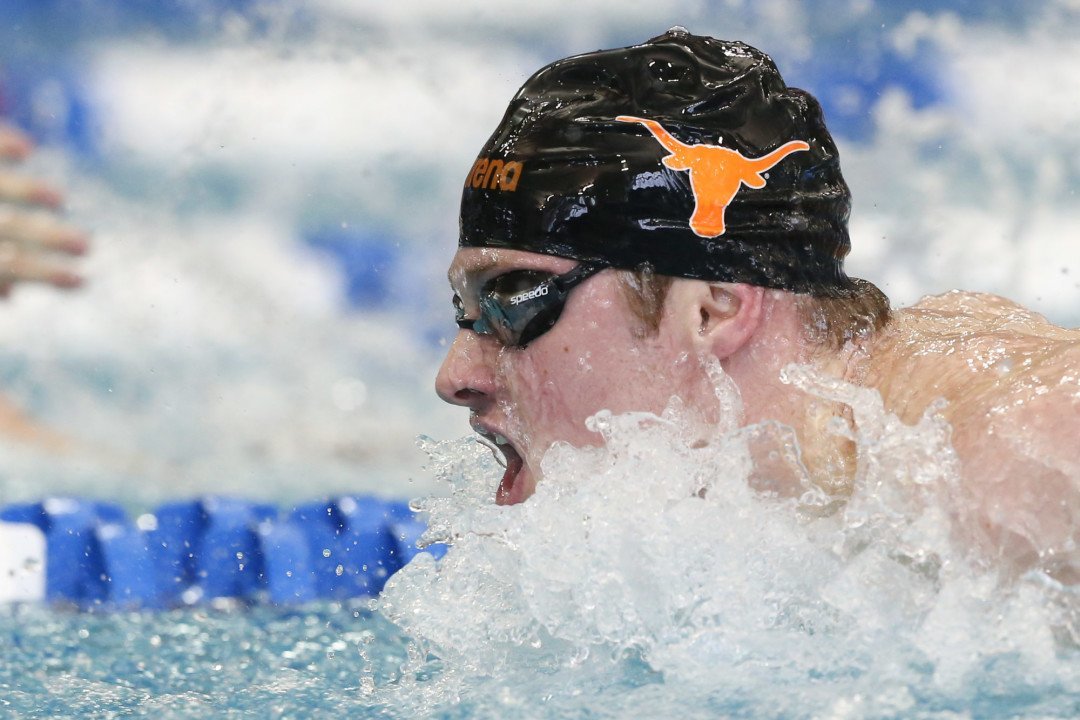 Their last matchup was the 2017 NCAA Championships, where Schooling out-touched Conger in the 100 fly (though Caeleb Dressel won the event) and Conger won the national title in the 200 fly as Schooling sunk to 37th place in prelims, saying after the race that he had been dealing with a stomach virus that week.

Schooling’s entry in the 100 breast also supports the notion that he might be called on to swim breast on Texas’s medley relays at the end of the year– he’s already split a respectable 24.64 in their tri meet with Florida and Indiana, the fastest of any Longhorn this season.

The Texas Invite will feature many other exciting battles past Schooling and Conger, however. USC, Stanford (M), Wisconsin, UCLA (W), Harvard, and host Texas, among other teams, will converge in Austin next weekend for a mid-season invite that could produce a lot of NCAA-leading times.

Matt Grevers is the top seed in both the 100 back and 100 free, ahead of Arizona’s Chatham Dobbs and Longhorn John Shebat in the backstroke and ahead of Stanford’ Sam Perry in the free. Grevers is also entered in the 50 free, where he’s seeded 2nd behind Schooling.

Will Licon and Andrew Wilson will likely sweep the breaststrokes, and they’re seeded 1st and 2nd, respectively, in both breast races. Licon is also the top seed in the 200 IM, where he has the fastest entry time by more than 2 seconds over Stanford’s Abrahm Devine. Another Texas alum, Clark Smith, is the top seed in the 500 and 1650 free over the Stanford distance group and Townley Haas.

Leah Smith, now graduated from UVA and training in Tuscon, Arizona with her coach Cory Chitwood, is the top seed in the 500 free and 200 free. Her schedule is no easy one– she’s also entered in the 400 IM, 200 fly, and 100 free, suggesting that IM might become more of a regular event for the distance specialist. Longhorn alum Madisyn Cox is the top seed in both IM’s as well as the 200 breast.

In discussing all of the stars racing at Texas next weekend, we would be remiss if we didn’t mention a certain Harvard standout– yes, national team-er Logan Houck is racing the 200 free, 500 free, and mile, and will look for an A cut in the mile to secure his spot at the 2018 NCAA Champs. Dean Farris will also grace Austin with his presence next weekend, as he’s entered in the 50, 100, 200, and 500 free as well as both backstrokes.

Farris is one of several names that will race in what should be a preview for a blockbuster 200 free final at the 2018 NCAA Championships. Farris, along with defending NCAA Champion Haas, 2017 finalist Cameron Craig, and 2017 finalist Dylan Carter are set to race the 200 free at Texas. The only returning swimmers from the 2017 final that are missing are Blake Pieroni of Indiana and Maxime Rooney of Florida. Pieroni (1:32.33) and Rooney (1:33.65) hold the #1 and #4 times in the country, respectively, after swimming with fast suits at their respective mid-season invites.

A couple of others to watch out for are Louise Hansson and Maggie Aroesty, two USC Trojans who have been on fire this year. Aroesty has already eclipsed her pre-college PR in the 200 breaststroke by over 2.5 seconds, while Hansson could snag a win in the 100 fly and/or 200 IM, among her other events.

Looks like there will be lots of interesting “match-ups”, especially in the freestyle events.

Schooling is too fast and precious in the Fly to be put on their breast. I don’t see him swimming breast in the medley relays.

But most likely he will be swimming the butterfly leg in NCAA. I feel Eddie is just preparing him for 200 IM in the future LCM.

You can’t be serious about the 200 LCM IM. He doesn’t even swim a 200 LCM fly anymore in major meets.

I mean they are totally different races. 200Fly really tests your endurance whereas the 200IM is practically a sprint of all four strokes. Yes you do need endurance, but you don’t need to train for a 200fly to do a 2IM

200 LCM IM is “practically a sprint”? You can’t be serious about that either. It’s one of the events that translates the worst from SCY to LCM (see David Nolan and Will Licon, as recent examples). There’s a reason the best 200 LCM IMers all have/had a fantastic 400 IM —- Phelps, Lochte, Hagino, and now Kalisz. Schooling is just a sprint fly/free guy. He’ll do a 200 fly SCY, but he won’t go up against the 200 LCM fly on a world stage anymore.

I agree 100 percent. In addition, I would add Melanie Margalis to the list, she was much more 400IM short course NCAA but hasnt done it in a few yrs long course. She is the top ranked American in 2IM LCM