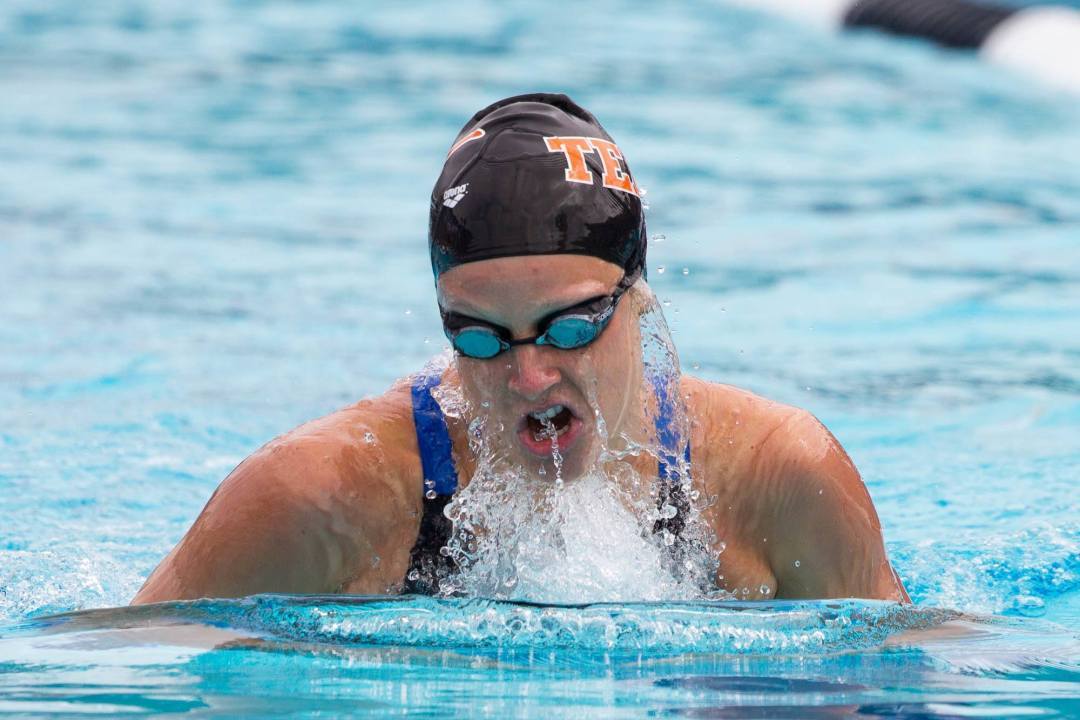 Junior Madisyn Cox has been unstoppable since moving to Austin for college, and the Texas IM corps appears to be growing up around her. Archive photo via Tim Binning/TheSwimPictures.com

In their third season under head coach Carol Capitani, the Texas Longhorns came up with the best-ever NCAA finish of the Capitani Era in 2015.

That was a 7th-place showing, up two spots from the previous two seasons, and it featured a number of breakout NCAA All-Americans.

Perhaps no one had a better year than sophomore Madisyn Cox, who came from out of nowhere to become one of the NCAA’s best IMer.

Madisyn Cox has been on fire in her two years at Texas. (Photo credit: Tim Binning)

After scoring just a single point with a 16th-place finish in the 200 IM as a freshman (and failing to score in either of her other individual races), Cox found herself in a pair of A finals as a sophomore, hitting her highest point as the 3rd-place finisher in the 200 IM behind Olympian Missy Franklin and multi-time All-American Liz Pelton.

That led a pretty well-rounded charge, with a number of swimmers eking out points in an event or two and all 5 relays scoring to propel the Longhorns past USC by just a single point for 7th place overall.

Senior Gretchen Jaques was the other Longhorn swimmer to make an A final (6th in the 100 breast) and diver Murphy Bromberg took 6th on Platform. A large Texas NCAAs squad also included point-scorers Tasija Karosas (100 back, 200 back), Sarah Denninghoff (100 back), Kaitlin Pawlowicz (1650 free) and Emma Ivory-Ganja (platform diving).

The bad news for Texas is that a number of those contributors will not return in 2016. The good news is that the Longhorns added significant numbers to their herd with a big, deep, talented recruiting class along with a high-profile transfer.

The breaststroker Jaques is gone, as are backstroker Denninghoff, diver Ivory-Ganja and distance specialist Pawlowicz, plus butterflyer Kelsey Leneave. That accounts for 63.5 of Texas’s 164 points from last year (counting each leg of a relay as 25% of the relay’s total points).

But fear not, Texas fans, because the ‘Horns are still mostly set in pretty much all of those events moving forward.

Gretchen Jaques was an individual NCAA scorer and a relay stalwart for the Longhorns before graduating. (Tim Binning)

Karosas was a better backstroker than Denninghoff by NCAAs anyways, and Bromberg scored more diving points that Ivory-Ganja. Beyond that, Texas has three freshman divers coming in to mitigate Ivory-Ganja’s departure.

Leneave graduates after just missing a B final slot in the 200 fly, but the team does bring in a flyer/IMer in Maggie D’Innocenzo, who transfers in from USC after two seasons. D’Innocenzo will be a junior, and will likely fit in as a 200 flyer and multi-distance IMer in Texas’s rapidly-rising IM group.

Jaques became a stable breaststroker for the team, and though no one comes in with NCAA scoring times, Olivia Anderson out of Minnesota should be a great replacement. Anderson comes out of the powerhouse Aquajets club that produced Olympian Rachel Bootsma, and comes in with times of 1:01.03 in the 100 breast and 2:14.82 in the 200.

Cox has been unstoppable since moving to Austin for college, and the Texas IM corps appears to be growing up around her. A 4:16.11 in the 400 IM out of high school, Cox went 4:03.63 at last year’s NCAAs, and is the second-fastest returning swimmer in the nation as a junior. Her drops in the 200 IM have been equally impressive, from a 1:59.31 to a 1:54.43 and the second-best returnee in the NCAA.

Nora McCullagh is one of two top-10 recruits heading to Texas this fall. (Tim Binning)

Joining her in 2015-2016 is #10 recruit in the nation Nora McCullagh, who comes to Austin out of the loaded SwimMAC club in North Carolina. McCullagh could swim any number of events at the college level, but a 4:10.33 incoming 400 IM time makes her a tempting prospect to pair with Cox for an unstoppable IM group.

Much like the #7 Georgia Bulldog men (whom we covered yesterday), the Texas Longhorns are becoming a team built around versatility. (Interestingly enough, Capitani spent 14 years coaching at Georgia before taking the Texas job). If Cox can play the role of Chase Kalisz in contending for an NCAA title, this Texas IM crew could turn out to be as good as the Georgia men, who scored in 7 separate IM swims last year.

Youth in the Freestyles

What Texas has that the Georgia men arguably don’t is a young group of excellent freestylers to fill out their relays.

Last year, the team’s best pure sprint freestylers were freshmen – Rebecca Millard and Mimi Schneider. That duo was serviceable as rookies, but should only be better in year 2. Millard anchored four relays at NCAAs, a high-pressure job to give to a first-year. But Millard proved a clutch relay leg, splitting 21s on her 50s (she was 22.6 in the individual event) and a 47.99 in the 100 (she was 48.8 individually).

This year, they’ll add McCullagh to the mix, at least in relays. Though McCullagh might swim IM or backstroke individually, she’s been 22.6 and 49.0 in the sprint freestyles.

Hometown product Quinn Carrozza is a huge pickup, coming in with a faster 200 free time than anyone on the team last season. (Tim Binning)

But the real wealth of riches for this team is becoming the 200 free, where they’ll bring in two, maybe three, freshmen faster than anyone on the roster last year.

McCullagh has been 1:46.22 which should make her a lock for the 800 free relay. And maybe Texas’s most vaulable recruiting piece is Quinn Carrozza, who comes from local Longhorn Aquatics with a best of 1:44.94. Carrozza is also 4:40.00 in the 500, and with Stanford’s Katie Ledecky deferring, Carrozza is suddenly in the conversation to be the premier distance swimmer in this freshman class.

Then there’s Joanna Evans, who is a national record-holder for the Bahamas. Evans smashed the Bahamian 400 free record at Pan Ams this past summer and looks like a perfect distance prospect to replace Pawlowicz. With times of 4:12.14 and 8:37.18 in the long course meter 400 and 800 frees, the only question is how much of her speed Evans can translate to the short course tub. But if she can even get close to those times, she should turn out to be a major pickup for the Longhorns.

What’s the remedy for a graduating Kelsey Leneave? Virginia’s Remedy Rule, that’s who.

Rule instantly comes into the NCAA as one of the best names in swimming (seriously, the headlines just write themselves!), but is also one of her class’s best butterflyers. A rare 52-second 100-flyer out of high school, Rule should be able to contend for NCAA points right out of the gate, and has the potential to rule (get it?) at the Big 12 level.

It’s not often that a freshman comes in with times better than the previous year’s conference champ, but Remedy is the exception to that Rule (OK, I promise, I’ll stop). Her 1:55.07 is more than a full second faster than Leneave’s Big 12 Championship-winning time from February. The Virginia product is also a very solid IMer (2:00.9/4:15.7), so don’t (one more, I swear this is the last one) rule out an appearance alongside Cox and/or McCullagh.

Brynne Wong was actually the Big 12’s 100 fly champ as a sophomore, and she should pair well with Rule. Expect the two to compete for the butterfly legs of the medley relays, or perhaps spell each other in longer, multi-session meets like NCAAs.

It’s not very often a team can graduate the kind of senior class Texas had last year and still improve as a whole, but Texas might have done just that by Ruling the recruiting market (I’m sorry, now I just can’t stop). An 11-person freshman class plus the transfer D’Innocenzo makes up a dozen new faces, most of whom have the potential to contribute early on in their Texas tenures.

The team’s prospects probably ride on two main areas. The first would be the IM group, which is looking like the backbone of the program moving forward. Cox is coming off a huge summer that included silver medals in the 200 IM at both U.S. Nationals and the World University Games in Gwangju, South Korea.

Carol Capitani looks to have the Longhorns steered in the right direction in year 4. (Tim Binning)

If Cox can truly live up to the hype of being an NCAA title contender in the IM races, she’ll serve as the core of an event group that could do some serious damage for Texas at the NCAA Championships, and could absolutely obliterate the thin Big 12.

Secondly, the team’s final place will depend a lot on how quickly its fledgling freestyle group can grow their horns. Millard, Schneider, Carrozza and Evans look like a core that can dominate across all the freestyle distances, but Texas will need more relays cracking the top 8 to really contend for a top 6 spot or higher in the final point standings.

Still, the team is pointing in a decidedly positive direction heading into year 4 under Capitani, and a team with this much talent that can essentially train through its conference meet is definitely a sneaky-good squad to watch for a potential breakout meet at NCAAs.

Capitani has really done a great job recruiting and building this team. Good luck on a fabulous season.!

Bethany Leap swam through a fractured heel bone last season, and still managed to go around her best times. She should be considered as a very viable replaced for Gretchen Jaques as far as the breastrokes go.

Texas tough is what she is!!

Lady Longhorns definitely setting themselves up for a breakout season. Besides Jaques, all of the senior class had a relatively disappointing season end. So who knows if they will miss much of the senior class next year. Karosas should more then replace Denninghoff in the backstrokes, Rule will hopefully beat Leneave’s mediocre season close, and the addition of Nora McCulloch and Quinn Carroza will help the relays substantially. That being said, hopefully Schneider picks it up this next season. Thought she would be the premiere sprinter of the freshman class and was pretty disappointed with her lackluster season end. Don’t know if she will even make the relays this year with the new pump of talent into the class. Can’t… Read more »