College Swimming Previews: #7 Elite Talents Back from Redshirt for IU 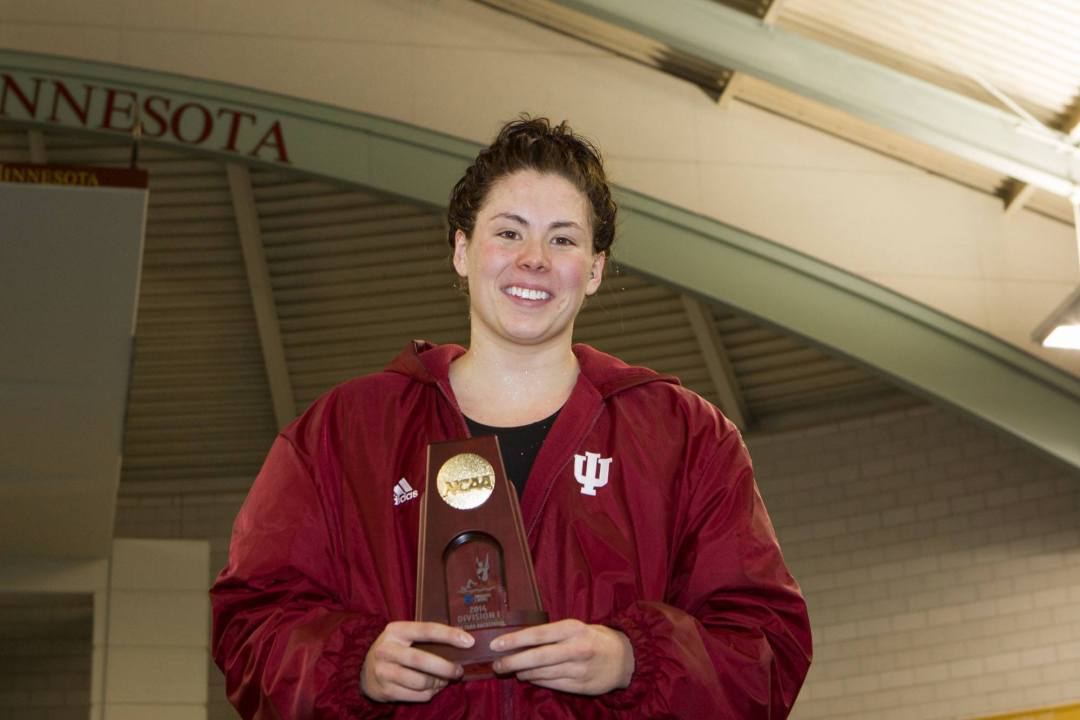 2014 NCAA Champion Brooklynn Snodgrass is back for IU after taking a redshirt year during the 2015-16 season. Archive photo via Tim Binning/TheSwimPictures.com

IU is coming off a successful 2020-2021 season, despite a major obstacle late in the season.

After a breakout summer, Rhyan White will be a key for the Alabama Crimson Tide in her senior season.

College Swimming Previews: #7 Ohio State a Threat in the Pool and On the Boards

After finishing 3rd at Big Tens last year, Ohio State is in excellent shape heading into this season.

Entering her senior season, Maggie MacNeil is the defending NCAA champion in both the women’s 100 freestyle and 100 butterfly.

Kristen Romano returns for a fifth year with the Buckeyes as they gear up to take a run at a third straight Big Ten title and a top-five showing at NCAAs.

While bringing in 16 newcomers, the Georgia women will have to rely on a small group of key upperclassmen to take over the majority of NCAA scoring.

College Previews: Can #8 NC State Get on Track to Challenge Cal/Texas Hegemony?

It may be a year too soon, but NC State is assembling the kind of talent that could break into the top two at NCAAs in the not-so-distant future.

Indiana had a big year, upending Minnesota and nearly sneaking ahead of Michigan at the 2016 Big Ten Championships for a very strong 2nd place finish. Led by freshman phenom Lilly King, who would go on to win Olympic gold in the 100m breast in Rio, the Hoosiers were the highest finishers of their conference at NCAAs (7th).

While the Hoosiers placed well at NCAAs, they did so by hunkering down on the shoulders of just a few swimmers. King, along with Miranda Tucker, Haley Lips, and Kennedy Goss were relied upon almost exclusively to fuel individual scoring at the national level. Considering IU was without 2015 NCAA platform champion Jessica Parratto and 2014 200 back NCAA champion Brooklynn Snodgrass due to redshirts, Ray Looze’s program performed very well at NCAAs to follow up their 2nd place finish at Big Tens. They did a lot with a little, and that will be their strategy again in 2016-17.

Especially in contrast with fantastic medley relays, made even stronger by Snodgrass’s return, IU‘s sprint free group is very weak. Last year at Big Tens, the Hoosiers had no A finalists in the 50 free, while none of their 100 freestylers went very far under 50 seconds individually.

The incoming freshmen are not equipped to give much aid to the sprint group, though Snodgrass will be able to lend a hand on one or both of the sprint free relays.

Indiana is certainly going to miss Haley Lips, who was a big-time scorer in all free races 200 yards and above at the conference and national level.

Returning, however, is Stephanie Marchuk, who is a solid conference scoring option. Marchuk also eked out a couple points in the mile at NCAAs last year. She’ll team up with the top newcomer Cassy Jernberg, a Wisconsin native who has very similar times to Marchuk.

Meanwhile, Kennedy Goss is a reliable 500 freestyler who scored in the B final at NCAAs last year, giving the Hoosiers three strong options for the 500 and two for the mile.

This is one of two areas where Miranda Tucker will be missed severely. Indiana has a slew of upperclassmen to pick up points in both IM races, while Lilly King and Gia Dalesandro are two of the conference’s best 200 IMers.

That said, both King and Dalesandro skipped out on the 200 IM at NCAAs last season, and no Hoosiers put up any points in either IM at the national level in 2016. Points could come if King decides to go for it in the 200, or if one of the 400 IM’ers like Bailey Pressey can drop a few seconds. Still, IU will in all likelihood only be a factor at the conference level in this discipline.

Gia Dalesandro is a rangy butterflier who can sprint just as well as she can tackle the 200. As a senior, she’ll be hungry to break through to the top 8 at NCAAs after swimming in the B final of both butterfly races last season.

In terms of the medley relay, Dalesandro is a very capable option that they should stick with next season. As far as other individual weapons are concerned, IM’er Pressey scored in the 200 fly at NCAAs last year, and there’s enough conference scoring depth to keep the Hoosiers at a solid B here. Sophomore Christine Jensen is also back after appearing in the B1G A final last season in the 100 fly.

Brooklynn Snodgrass‘s return is key here. Her ability to sprint despite being stronger in the 200 is essential to the Hoosier medley relays, which will feature a lightning-fast breaststroke split from King. It would be somewhat surprising if, on either medley relay, IU is behind any team in the country at the halfway mark.

Individually, Snodgrass has been off of her 2014 form when she won the 200 back NCAA title. That said, she was still able to reach the A final in 2015, and if she can post a 1:52 or so, she’ll be right in the mix. Even if Snodgrass doesn’t come true, Kennedy Goss is back after a third place finish in this event last season, only hundredths away from 2nd place Courtney Bartholomew of UVA. Goss has improved since getting to Bloomington, and a sub-1:50 200 back could certainly be in the cards for her.

Other than the Canadians, Marie Chamberlain was a solid interim medley relay and sprint backstroker in Snodgrass’s absence– the junior will add depth in this discipline, and returns after scoring 49 individual backstroke points at the 2016 B1G Champs.

Yes, the Hoosiers lost Miranda Tucker to a transfer to B1G rival Michigan. Nevertheless, and this shouldn’t come as a shock, Lilly King is the clear underlying reason for the A+ rating here.

It’s hard to call any swimmers “locks” for 1st place in any high-caliber races other than a certain “KL”, what with all of the variables present in the sport, but this “LK” is a near lock to sweep the breaststrokes again at B1Gs and NCAAs.

40 points for two individual events is literally the best a swimmer can do at NCAAs, and it’s what King did last year (and by a considerable margin in the 100). The kind of advantage she’ll give the medley relays, too, is gargantuan. While the depth isn’t really there without Tucker, IU brings in two freshman (Lydia Welty and Hope Hayward) that might experience some drops in their breaststroke events to make them into conference scorers.

With or without depth, though, it’s hard to knock a team led by a 2016 Olympic Champion.

While Miranda Tucker transferring out will greatly hinder their individual scoring at the conference and national level, the Hoosiers will likely be able to more than make up for the deficit with the return of Jessica Parratto and Brooklynn Snodgrass from redshirts. Parratto had a dominant win in platform diving in 2015, and she’ll contend for another title in 2017 to give the Hoosiers a very strong diving boost.

Snodgrass will team up with King to form a medley relay front half to be reckoned with, while team leaders like Kennedy Goss and Gia Dalesandro can be counted on to turn in great individual performances as well as lending hands on relays.

The Hoosiers don’t have the most glitzy incoming class, but the talent is already there in the upper ranks. Without a better sprint free attack, Indiana probably can’t topple Michigan in the Big Ten, but its handful of high-scoring stars makes Indiana the Big Ten’s biggest factor come NCAAs.

I clicked on a Missouri preview and got an Indiana preview. A good read, but I still want to read about my Tigers!

Hey Dustin – you must’ve come from Twitter. We’re really close to solving the problem, but for now, trust the TEXT OF THE TWEET, not the TWITTER CARD PREVIEW.

Does IU still have the Brazilian freestyler coming in mid season? She could make a difference on relays.

If MI gets MTucker to be eligible midseason like I heard, I don’t think IN can beat them for conference. But never count out those IN diving points!!

brooklynn snodgrass is my hero

Did Jernberg decommit from Tennesse