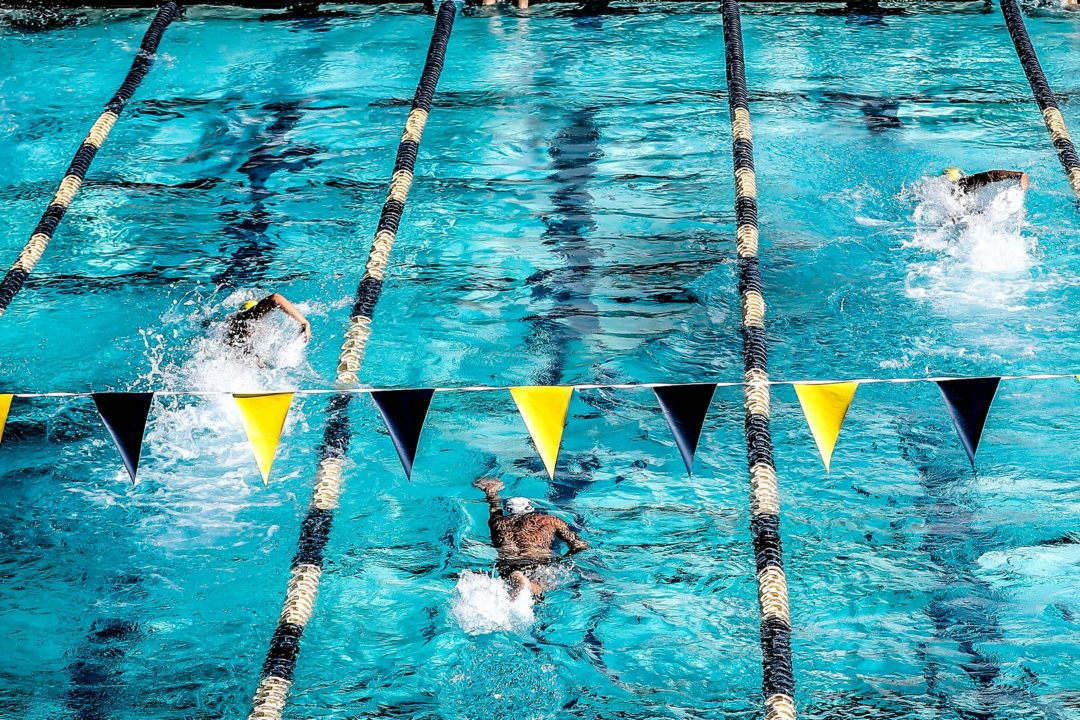 Reflections from a swim parent on seeing their child's entire senior collegiate season cancelled due to the pandemic. Stock photo via Jack Spitser/Spitser Photography

It was, as you would expect, a frigid mid-February Saturday evening in Buffalo, New York for the concluding night of the 2019 Metro Atlantic Athletic Conference Swimming and Diving Championships. You were quick to forget that inside the natatorium, however, as the warmth created when family and fans of the MAAC schools packed the stands-back when you were allowed to pack stands-forced most spectators to shed layers of clothing to only college-branded t-shirts.

As I joined the capacity crowd to rise up and watch the last lap of the Women’s 200 Breaststroke A Final, I glanced at the man next to me in the bleachers and noticed tears in his eyes.

It was a somewhat surreal scene. Amidst the din and clamor of eight championship finalist swimmers straining for the finish in a frenetic race as their teammates screamed, the pool so loud that the vocals of the PA announcer were swallowed by the cacophony of noise, he stared silently at the Fairfield University swimmer in Lane 6, clearly emotional.

I recognized what was happening and the significance of the moment. When his daughter, a senior teammate of my daughter on the Stags Women’s Swim Team, touched the wall at the end of that race, her swimming career was over.

Done…finished forever. It was the last time he would watch her compete.

I didn’t say anything, choosing to leave my fellow Fairfield swim dad alone with his thoughts. Instead, I smiled slightly as it occurred to me that this must be a powerful, poignant moment. One of those life flashes before your eyes, end of the Academy Award-winning film American Beauty-type scenes, where as soon as your child hits that touchpad in the final race of their career, all those swim memories come rushing back.

Their nervousness at team tryouts, the car rides to and from practice, the smiles the first time they earned a ribbon or medal, the tears after a disappointing performance, the good, the bad, the ugly. All of the imagery of a child evolving into a collegiate athlete passes through your mind as you realize that, man, it’s all over.

And I recognized that day was coming for me as well. Probably in the same place, in the same pool, at the same championship meet. In 24 months, my daughter’s time as a competitive swimmer would also end, and I wondered how I would feel at that moment.

Actually, I’ll never know, because as it turns out, I had that moment, I just didn’t realize it as it was happening.

You see, my daughter’s swimming career ended at last year’s MAAC Championship. This year’s conference championship, like the entirety of her senior year, was cancelled earlier this month as another casualty of the COVID-19 pandemic.

It was depressing enough to lose the regular season. Like most college swim parents, the dual meet season during the fall and winter had become a big, and fun, part of our lives. Traveling to different college towns, grabbing breakfast, enjoying the competition, taking our daughter out to dinner after the home meets, celebratory drinks with fellow Fairfield parents. It was disappointing to miss out on those experiences and memories, but as the pandemic raged on, not all that unexpected.

There was still optimism as the meet was pushed back from February to April, but ultimately the Council of Presidents decided the MAAC swimming and diving championships would not take place for the first time since 1984.

I don’t know exactly why they pulled the plug, and I’m not criticizing or complaining about the decision. Eh…maybe a little bit. But this is an incredibly challenging and difficult time. I know from my own professional life that these problems are very complex and complicated.

First, let’s acknowledge the standard disclaimer. I certainly understand that many people have lost so much during this pandemic. Loved ones, businesses, life savings. Losing your kid’s senior season of college swimming pales in comparison.

However, it is still disappointing. And it is certainly appropriate to be sad and frustrated about it. But in the end, all you can do is accept that this is not how things were supposed to be, but it is how things are.

It was an unlikely end to an improbable athletic career. You see, we are not a swimming family, at least not in a traditional sense. My daughter’s initial foray into swimming came, comparatively speaking I guess, relatively late in life, at age 11. She had just finished a summer “Lifeguard in Training” camp on the ocean, and the instructor approached me after the last session and stated, “You know, she’s pretty good in the water, you might want to get her into club swimming.”

My response: “What the heck is club swimming?”

But those words started this journey that sadly, I won’t be able to see properly end. It began with her being, by far, the oldest kid in an entry level YMCA swimming program. But she worked hard, and developed a love and passion for it. And she had good coaches, overcoming her parents’ lack of knowledge. We still laugh about when she was 13, and surprisingly qualified for the New Jersey Age Group State Championships, that she was the only competitor at the meet without a technical suit, because we had no idea what a technical suit was.

A big step was when she wanted to move up to her club’s Senior Level the summer before her freshman year in high school. My wife and I looked at the schedule, with double-sessions consisting of early morning and evening practices, and thought there was no way in hell she would ever do it. But she did.

Through it all, my daughter had great experiences. She got to be a part of exciting events like YMCA Nationals and helped her high school to the first county girls swimming championship in school history. She earned a scholarship to a wonderful university and was part of the first MAAC title in Fairfield program history. She has made great friends and is set up for a bright future. It just didn’t end the way it was supposed to.

When I find myself in a particularly pensive mood, and try to reconcile any disappointment, I tell myself that maybe this is for the best. Last year’s MAAC championship was a spectacularly fun event. It was one of the closest college championship meets in the nation, with a three-team battle between Iona, Marist and Fairfield coming down to the final event. The Stags won the 400 Free Relay to clinch Fairfield’s third consecutive title. My daughter had a great meet. She was happy, her teammates celebrated. If that is going to be my last memory, it’s certainly not a bad one. And although Buffalo in February is charming, I think I’ll survive skipping out on the trip this year.

Michael with his daughter Maria and wife Kara after the 2020 MAAC Championships.

As my daughter’s favorite Avenger Tony Stark said, “Part of the journey is the end.” But as I discovered, we don’t always get to choose how the journey ends, and sometimes don’t even realize that we have already witnessed the end. I will definitely miss it, and will always be a bit sad about what we lost out on, but perhaps I should just take another lesson from American Beauty, and ultimately simply be grateful for every moment of the experience.

Michael Nitti is an educator who lives in Robbinsville New Jersey. His daughter Maria is a senior captain on the Fairfield University Women’s Swim Team. She will graduate with a degree in finance in May.

I really liked this. It looks like my son is going to lose his freshman season of swimming. I feel bad for all these kids.

Thank you for putting into words what so many of are feeling right now.

Thanks for sharing, Swim Dad. Great writing and great message.