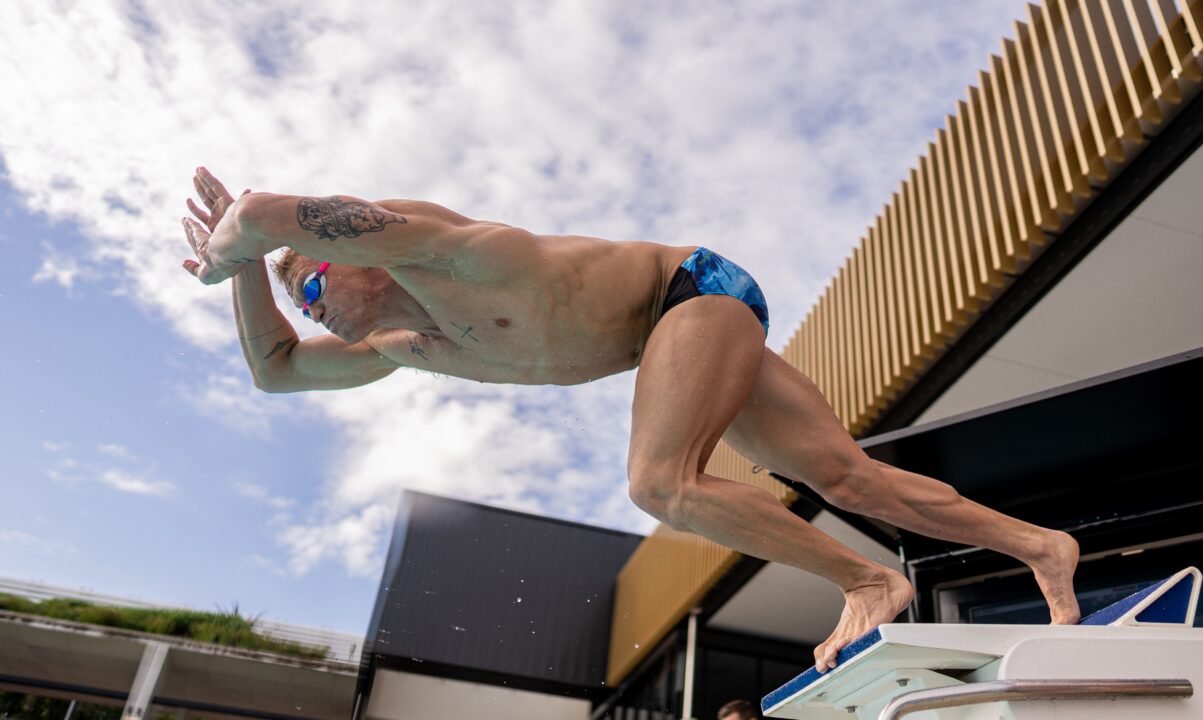 The 2022 Duel in the Pool is upon us and one of the highest-profile racers on the Australian side is pop-star-turned-Commonwealth Games swimmer Cody Simpson. Archive photo via Speedo

The 25-year-old is riding the wave of his aquatic comeback, having put his singing career on hold while he pursues prowess in the pool.

After just under two years back in the water, Simpson successfully made the green and gold squad for Birmingham. The Griffith University standout’s highest individual finish at this year’s Commonwealth Games came in the men’s 100m fly where he placed 5th.

But now Simpson is eyeing other events to expand his Paris 2024 potential.

“I came back to swimming and picked the 100 fly just because it was something I liked to swim growing up and we focused on it because it was the first little breakthrough I had in an event,” Simpson told The Daily Telegraph.

“But I’ve yet to sort of explore other territory and I think the next 12 months will be my opportunity to expand on the events I will swim and try new things.

“So far my focus has been on the one event, so I’d love to expand.”

Not getting entirely specific, Simpson continued, “I talk to my coach a lot about goal times and benchmarks I’d like to hit but those are things that we keep in our head.

“I have to take it one step at a time, put one foot in front of the other because it’s hard to jump to the top of the mountain without taking those necessary steps in between.

“I always said that anything in advance of Paris will be a bonus for me and to have already been able to be a part of the Comm Games this year is something (special).

Relays could potentially be a big part of Simpson’s plan, as he’s already gained elite experience in the prelims of the Commonwealth Games. He raced in the heats of both the men’s 400m free relay and medley relays, putting up respective freestyle and fly splits of 48.86 and 51.49.

To make a possible transition to the men’s 4x100m freestyle relay, however, Simpson would need to up his game just to make it onto the Aussie team, let alone help the nation medal.

Individually, Simpson owns a lifetime best of 49.34 in the 100m freestyle, a time he achieved in the prelims at this year’s nationals.

The teen took men’s 400m free relay and 800m free relay gold at the Commonwealth Games while he also snagged mixed freestyle relay gold as a heats swimmer. His personal best in the 100m free rests at the 48.60 he logged this past April while competing as a 16-year-old at the Australian Age Championships.

Although an established international medalist as a 50m fly champion at the 2019 World University Games, the 23-year-old is just hitting his stride in the 100m free.

Yang took the national championships title this year in a huge lifetime best of 48.55 and kept the momentum going by picking up two relay gold medals in Birmingham.

Finally, Zac Incerti could be another barrier to Simpson’s attempt to make the men’s 400m free relay.

Although plagued with illness during the key competitions this year, Incerti took runner-up status behind Yang in the 100m free at the aforementioned national championships. Before that the 26-year-old captured two bronze medals in Tokyo, including the men’s 400m and 800m free relays.

I thought Flynn southam swam a 100 free pb in Birmingham

Cody is the real deal like it or not. He has a sub 51 100 fly in him and a sub 49 100 free. I don’t know how much potential he has exactly but he’s probably got less than 10 swims sub 54 seconds in the 100 fly and an equal amount sub 52 in 100 free. Everyone else his speed has been training for years slowly chipping away at it but he essentially just decided to do it. That’s pretty scary

Can he swim backstroke? That 100 back is wide open in Australia.

You are forgetting about superstar Leon MacAlister. He is not only elite at the 100 back but also an Weekend Warrior.

I don’t mind it. But I am annoyed that I now know what he is famous for. The article above said singing career. Until now I’ve been perfectly content to see his name frequently on this site while happily oblivious to why he’s well known.

Back then I didn’t know who she was but knew him. Must be from the time she was at SI, arguably her best.

Unless he suddenly discovers some hitherto undiscovered potential as a 50free swimmer; 100fly looks his best avenue to an individual berth for Paris. Currently he would probably sit 3rd or 4th in pecking order, depending on whether Chalmers pursues this further. Whilst the QT of 51.67 is within his reach; he will most likely need to drop his PB a tick or two below 51.5 as Champion has put down a recent 51.54.

The 4x100fr relay is plausible but I think they will be looking to keep “relay only” selections to a minimum and those who may also have 4×200 claims will most likely have precedence for. Its certainly a possibility but he currently has Chalmers, Cartwright, Incerti & Yang… Read more »

No reason they wouldn’t take the top 6 if the top 6 are fast enough.

Not quite that clear-cut. Will also need to take into account:

This guy is an music and sports agents wet dream. He is going to be a mech machine if he makes the Olympics. Honestly he can probably be a merch machine by just supporting the games in a rep fashion.

And Cartwright is back too.