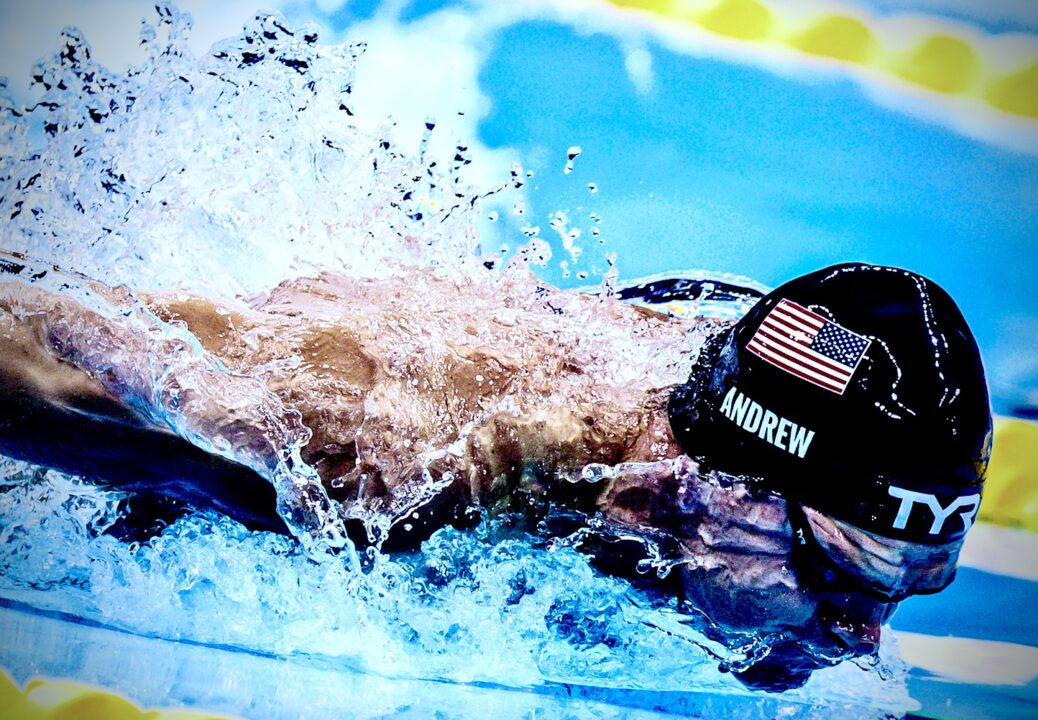 Michael Andrew will play a crucial role if the U.S. team is to have success on Day 2 of the Duel In The Pool in Sydney, Australia. Archive photo via Jack Spitser/Spitser Photography

The Australian team got off to a good start at the 2022 Duel In The Pool, defeating the United States in the mixed 4×800 open water relay to gain an early 8-6 advantage in the scoring race.

As we head into Day 2, the first of two sessions of racing in the pool, we’ll take a look at each event and predict which team has the advantage based on roster strength.

For a detailed look at how the different types of events work, click here.

Note the Para events aren’t included in the previews below due to their complex nature (staggered starts, athletes picking their own stroke, etc.)

The U.S. will likely open up with a sizzling front-half, potentially featuring Shaine Casas and Michael Andrew. The Aussies will likely open with 100 back world record holder Kaylee McKeown, which, while it will put them in a deficit early, will pay dividends later.

Australia can turn to Zac Stubblety-Cook, Matt Temple and Mollie O’Callaghan on the end, while the Americans have Gabi Albiero and Mallory Comerford. The Australian edge on the women’s side is pretty significant on paper, making them the likely victors.

The broken 400 free for women will feature one 200-meter race followed by a pair of 100s, with points awarded for both the aggregate winner and the top finisher of each interval.

The Aussie women have three of the top-10 women in the 400 free this year, with Lani Pallister, Kiah Melverton and Leah Neale. If they wanted someone with a bit more speed, they could also throw in Madi Wilson. The U.S. has a strong option in Bella Sims, but the Aussies have a clear advantage.

The Americans have three options faster than any Aussies this year in the men’s 100 fly: Shaine Casas, Michael Andrew and Trenton Julian. With Andrew likely racing the 100 breast shortly after, it will probably be Casas and Julian, but that still puts the U.S. in a favorable spot over Australia’s Matt Temple and Cody Simpson.

The Aussies have Emma McKeon coming off a Commonwealth title in the women’s 50 fly, and she’s got the endurance to perform in three rounds of skins. They also have Brianna Throssell, who also won’t fade over three rounds and has been significantly faster than the top U.S. options (Gabi Albiero, Beata Nelson).

Fatigue could come into play here, though if we assume the U.S. doesn’t use Michael Andrew in the 100 fly, he should be fresh enough to book the win here. Andrew has been a full second faster than Australia’s Zac Stubblety-Cook in the 100 breast this year, clocking 58.51 at the U.S. Trials in April.

Australia has Stubblety-Cook (59.51) and Sam Williamson (59.82) sub-1:00 this year, while American Kevin Houseman is close at 1:00.05. With the point scoring being 4-3-2-1, if the athletes finish in the same order they’re ranked in this year, this is a wash. But with Houseman within striking distance of the Aussies, and Andrew well ahead, the U.S. gets the nod.

This one clearly goes to Australia—they’ve got three of the five-fastest swimmers in the world this year in the form of Emma McKeon, Shayna Jack and Meg Harris. Each team can only use two swimmers for each “traditional” individual event, but Australia should easily go 1-2 and score seven points.

This one should be fairly evenly-matched between the two squads, though Australia again has the advantage. Chelsea Hodges is the fastest swimmer in the field this year at 30.05, and Jenna Strauch sits third in 30.77. The U.S. has Kaitlyn Dobler (30.34) and Annie Lazor (30.89), so while it could go either way, the slight edge goes to the Aussies.

Australia may have the best swimmer in this event with Mack Horton, but the U.S. has depth, with versatile freestyle swimmers on their roster including Charlie Clark, Luke Hobson, David Johnston and Grant House. They can only use two of them, but they just need one of them to be performing well to challenge Horton, who may be fatigued after a busy summer.

Ryan Held, Shaine Casas and Justin Ress give the U.S. men three options who have been 48.38 or better this year. Australia’s top option is Matt Temple, who hasn’t broken 49 seconds on a flat-start in 2022.

Across the four 100-meter events, the U.S. women only have the top swimmer this year in one of them, and that’s the 100 breast, where Annie Lazor holds a slight advantage on Jenna Strauch.

With Kaylee McKeown on back, Emma McKeon on fly and Mollie O’Callaghan on free, Australia is well positioned in the women’s medley relay.

With world champion Justin Ress (23.92 best time) and the fourth-fastest swimmer ever in Shaine Casas (24.00 best time), the American men are clearly superior in the 50 back. Michael Andrew gives them a third swimmer under 25 seconds in 2022, having been 24.64, while Australia has none.

While the order in which the strokes will be swum won’t be determined until just before the race, the Americans have several elite options, but will likely go with Chase Kalisz and Trenton Julian if Casas and Andrew are in the backstroke skins.

Australia has Brendon Smith, who will probably be well rested at this point in the session (though Kalisz should be as well), and Mitch Larkin should be in there as well. But the U.S. has the edge.

Kaylee McKeown and Mollie O’Callaghan make Australia the big favorite to go 1-2 here, though if O’Callaghan has raced a lot and is feeling some fatigue, Amy Fulmer or Beata Nelson could sneak in.

With Andrew, Held, Ress and David Curtiss, the Americans are in good shape here. Held and Curtiss in particular should be fairly well rested and relied upon here.

Tom Nowakowski will be counted on to step up for Australia, and Matt Temple and Grayson Bell will need to be on point if they hope to upset one of the Americans.

Australia should easily score maximum points here, as they bring three swimmers ranked in the world’s top nine this year, and two more inside the top 20. O’Callaghan, Wilson, Neale, Pallister, Throssell and Harris have all been faster than the top U.S. swimmer.

That leading American is Bella Sims, who has proven to be clutch at times and we wouldn’t put it past her to break into the top two if she’s on.

The “random” relay could go either way as teams will have to select their lineup and then find out if it will be a free or medley relay.

Both teams have versatile options who could do either. The biggest key to success in this relay is having someone who can swim free and breast at a high level, because the majority of breaststrokers can’t sprint freestyle that well.

The Americans have the perfect option for this relay in Michael Andrew, who can do all four strokes at a world-class level, and Shaine Casas is a good option for anything other than breaststroke.

Australia has Grayson Bell, who may not be as quick as Andrew in either, but can go 22-low and 27-mid. Matt Temple would work well here for the Aussies as well as a capable free/fly swimmer.

On the women’s side, if breaststroke is covered by the male swimmers, there are plenty of back/fly options who can also swim free well such as Beata Nelson, Gabi Albiero and Mallory Comerford for the U.S. and Mollie O’Callaghan and Emma McKeon for Australia.

Of the 15 events in which we’ve given one team an advantage, Australia has the edge, 8-7, including both relays where points will be increased.

However, a lot can change over the course of such a busy session, and the Para races will also play a role in how the scoring transpires.

Right now, it looks like Australia will be ahead after Saturday’s session, but it should be close.

Just curious if someone sets a world record etc will it count officially ?

The question of whether this match ends up being close at all hinges on whether the AUS women can sufficiently off-set the weakness of their male counterparts. Somehow, I can see the US women sneaking more surprise results than the AUS men. IF the biggest AUS names do show up and perform then this can be close. If they don’t then US wins comfortably.

The US will probably be fresher than the AUS team. However the Aussies have shown they can maintain a high-level at two big champs already this year. I think AUS women will score enough of an advantage to make up for male team weakness. Anyway we will see in about 5 1/2 hours.

US will certainly be fresher. Do give some credence to your view that AUS can still back up. There IS a much healthier attitude towards racing and racing opportunities with (most) leading AUS swimmers and more coaches than was the case some years back.

If AUS women do fire then they can win however this is a fairly toothless AUS men’s team and of the “names” that are listed to show up; not all are particularly optimised for this brand of racing.

Will be interesting viewing at least

USA got this fs

None of the top backstrokers or top butterfliers for the female contingent of USA Swimming are present:

The broken events are broken.

I thought Australia swimming sold us on Titmus vs Ledecky and Dressel vs Chalmers!?! I want my money back!

These are not the FINA World Aquatics Championships.

Besides, the 400 meter freestyle is Ariarne Titmus’ event

I seem to recall Titmus saying No to this very early on and most of the others named weren’t far behind.