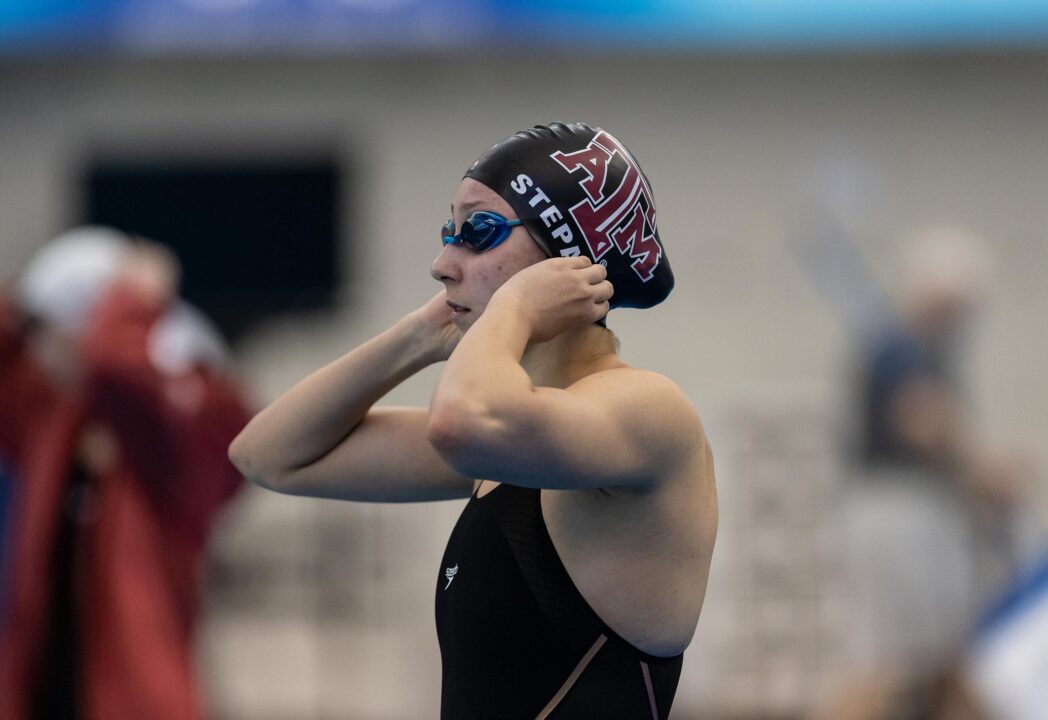 Chloe Stepanek was a key contributor for the Aggies, winning both her individual events and providing excellent relay legs. Stock photo via NCAA Photos

Chloe Stepanek was a key contributor for the Aggies, winning both her individual events and providing excellent relay legs. She kicked off her day by helping the Texas A&M 200 medley relay to victory. That relay saw Jordan Buechler lead off in 26.12, then Bobbi Kennett split 29.07 on breast, Olivia Theall 23.69 on fly, and Stepanek anchor in 22.86. They combined for a 1:41.74, speeding into the wall first by 2.44 seconds.

The Cougars picked up one individual win on the day, seeing sophomore Emma Wright clock a 51.17 to win the 100 free. Wright was locked in a dead heat with A&M freshman Manita Sathianchokwisan at the halfway mark, flipping in 24.70 to Sathianchokwisan’s 24.79 at the 50. The 19-year-old Wright then put together a great second 50, speeding home in 26.47 to pull away from Sathianchokwisan, ultimately finishing 0.68 seconds ahead of her. Texas A&M sophomore JoAnn Adler also had a fantastic second 50, roaring home in 26.38 after splitting 25.55 on the opening 50. Adler raced the 100 exhibition (not for points) but clocked the third-fastest time in the event with a 51.93.

Sathianchokwisan was the winner of the 50 free, swimming a 23.63 to get her hand on the wall first.

On the boards, Houston’s Katie Deininger was the official winner in 1-meter, though three Aggies scored higher than her. Deininger scored 288.08 points, while Alyssa Clairmont had 325.58, Mayson Richards 306.45, and Joslyn Oakley 305.40 for A&M. Clairmont was both the top scorer and the winner of 3-meter diving, racking up 345.83 points to win by well over 20 points.