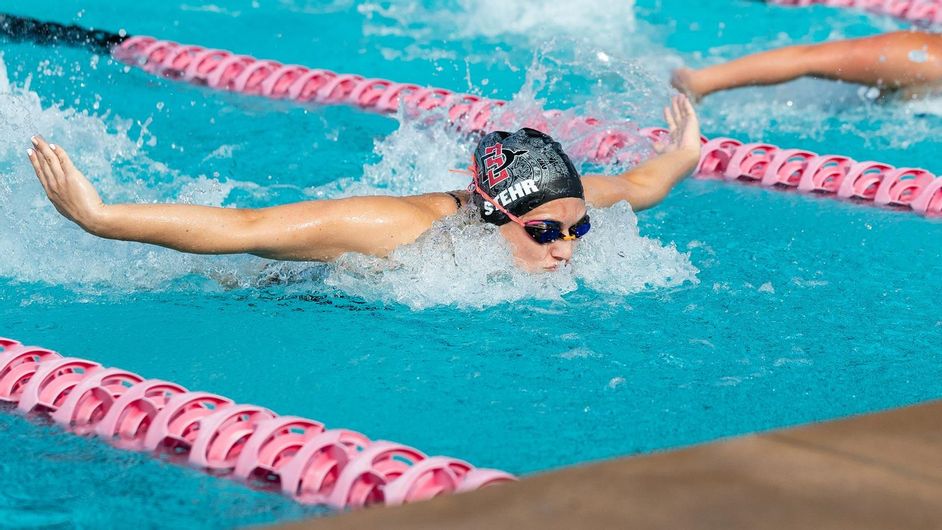 The Aztecs registered their 38th consecutive dual-meet triumph since Jan. 8, 2018, and kept their unblemished record against the Waves intact at 19-0. Current photo via San Diego State Athletics

MALIBU, Calif. – The San Diego State swimming and diving team continued its dominance in dual-meet competition on Thursday after posting an 83-59 decision over Pepperdine at Raleigh Runnels Memorial Pool.

With the victory, the Aztecs registered their 38th consecutive dual-meet triumph since Jan. 8, 2018, and kept their unblemished record against the Waves intact at 19-0, including a 12-0 mark in Malibu.

SDSU posted the top three scoring times in four different individual events and won both relays while boasting three of the top four divers to highlight a successful meet.

The Aztecs set the tone at the outset, grabbing the top two finishes in the 200 medley relay, including the team of Mai McKenna, Christiana Williams, Jeannette King and Avery Turney, who joined forces for a winning time of 1:45.06, while the quartet of Abigail Storm, Olivia Zamudio, Emily Tenczar and Alyssa Schiller placed second after clocking in at 1:46.90.

Shortly thereafter, the Scarlet and Black replicated the feat in the 50 breaststroke, as Moa Bergdahl (30.18) won a closely contested finish over teammates McMurray (30.30) and Stehr (30.33), while Alex Roberts (31.46) and Liberty Edwards (32.68) swam exhibition races.

In the final swim event of the meet, the Aztecs captured the 200 freestyle relay, as the team of Gebhardt, King, Menzmer and Kristina Murphy combined for the victorious time of 1:13.01, while the quartet of Tenczar, Wehr, Stehr and Turney finished fourth at 1:23.98.

Not to be outdone, the Aztecs’ Summer Westmoreland claimed the diving title on the 1-meter board after racking up 245.85 points, while Taylor Konopacke (230.63) landed in the runner-up spot, followed by Zamudio (223.65), who took fourth.

San Diego State will remain on the road for the next two days when it travels to the Central Valley for the Chick-Fil-A Invitational, Oct. 7-8, in Fresno, California.

MALIBU, California – The Pepperdine swimming and diving program opened its 2022-23 season with a home meet and had spirited efforts by its relay teams, but the Waves were defeated by San Diego State on Thursday morning at Raleigh Runnels Memorial Pool.

After just one meet, a pair of swimmers entered the top-10 all-time list for the 100 IM. Charli Sunahara’s (Chino, Calif./Ruben S. Ayala HS) time of 1:00.99 marks her ninth on Pepperdine’s record books. Following right behind her, Alexandra Browne (Arlington, Va./Washington-Liberty HS) notched a 1:01.22 showing, good for 10th on the list.

AJ Adams (Castle Rock, Colo./Valor Christian HS) recorded a fourth-place showing in the 50 back with a time of 28.02. Sunahara placed similarly with a 30.72 clip in the 50 breast.

In 1-meter diving, three Waves made their debuts as freshmen. One of the rookies, Amanda Wong (Santa Ana, Calif./Foothill HS), took third with a final score of 226.58.

SDSU earned 83 points on the morning, while Pepperdine accumulated 59.