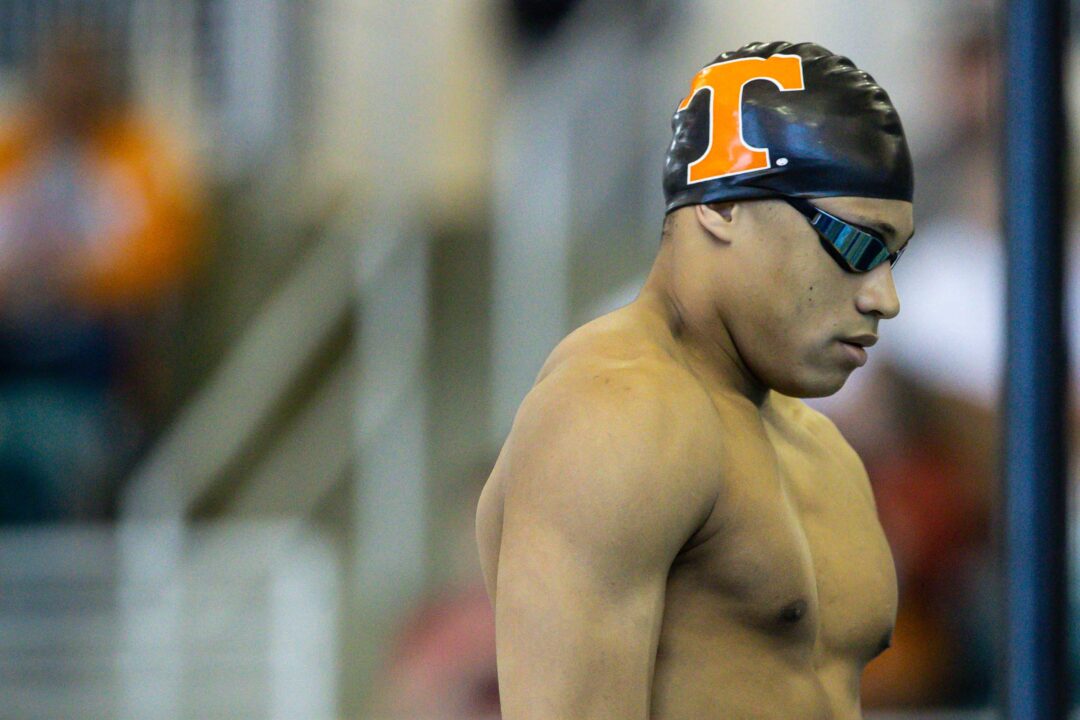 Crooks' time of 19.36 from Tennessee's dual with UNC Wilmington last week is among the fastest we've ever seen this early in the NCAA season. Archive photo via Jack Spitser/Spitser Photography

Although it wasn’t quite as fast as he might’ve gone at the end of practice (up for debate), Jordan Crooks produced one of the quickest times we’ve ever seen this early in the season in the men’s 50 freestyle.

Crooks, a 20-year-old sophomore at Tennessee, clocked in at 19.36 in the Vols’ dual meet sweep over UNC Wilmington last week, taking over the top time in the nation by more than three-tenths of a second.

Crooks is coming off a standout opening campaign in Knoxville that included becoming the fastest freshman of all-time in the 50 free (18.53), roaring to the SEC title. After following up with a third-place finish in his first NCAAs (18.60), the Cayman Islands native appears to be on track for an even better sophomore season.

If we take a look back at where he was as a freshman at this point in 2021, Crooks was nowhere near the level he’s currently at.

At Tennessee’s season-opening dual with UCNW last year, he was 20.92 in the 50 free, and didn’t break the 20-second barrier until the mid-season Tennessee Invitational in November (19.39). He didn’t go faster than the 19.36 he went last weekend until SECs last season.

On top of this individual progress, Crooks’ 19.36 stands up as the third-fastest 50 free swim we’ve seen in the NCAA prior to the start of November.

Going back as far as the 2007-08 season, Danny Krueger and Caeleb Dressel are the only swimmers to have been quicker than Crooks pre-November.

While he’ll clearly be among the frontrunners, Crooks will have plenty of competition for the NCAA title in this event come March, with eight other men already sub-20 in the event this season. Leading that charge is Florida freshman Josh Liendo, who was 19.69 in his first SCY 50 free two weeks ago.

Don’t sleep on Tennessee. Someone keeps saying “good things happen here every day” and I believe it. A team on the ups. GBO!