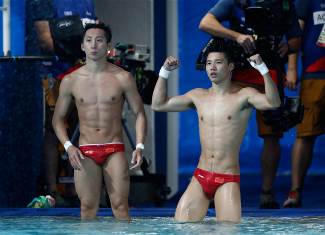 With two more gold medals on Monday, China remains a perfect 7-for-7 in diving events at the 2019 World Championships - and the meet is already half-over. Stock photo via Rio2016.com

With two more gold medals on Monday, China remains a perfect 7-for-7 in diving events at the 2019 World Championships – and the meet is already half-over.

Monday’s events brought in two more synchro diving golds: men’s 10-meter synchro and women’s 3-meter synchro. Both are events China won in 2017 as well. The scores weren’t particularly close, either: China won the men’s event by 42 points and the women’s by 31.

The Chinese duo of Shi Tingmao and Wang Han roared out of the gate with a 53.40-point first dive to build a four-point lead over Canada. But it was their closing three dives that really buried the field. All three held 3.0 degrees of difficulty and scored 76+ points apiece.

For Shi, that makes an incredible four-straight World Champs golds in this event. She won in 2013 and 2015 with partner Wu Minxia, and won in 2017 with partner Chang Yani.

The next-closest competitors were the Canadian team of Jennifer Abel and Jennifer Citrini-Beaulieu, the defending Worlds silver medalists. They scored 74.4 points on their second-to-last dive, a forward three-and-a-half with a 3.1 degree of difficulty. They well outpaced Mexico, the bronze medalists about 16 points back.

Paolo Espinosa and Melany Hernandez Torres scored 294.90 points for bronze. That edged Russia by just two points and Great Britain by just five in a spirited battle for the final medal. It was a 66.60-point final dive that did it for Mexico, though Russia (72.00) charged hard on that final dive.

China’s Cao Yuan won his second gold of this year’s World Championships, and teammate Chen Aisen won his third consecutive World Champs gold in the 10-meter synchro. They dominated this event, crushing the field by more than 40 points.

The Cao-Chen dominance was brutal in this contest. Their final three dives scored 97.20, 92.13 and 93.96 points. Across the other 11 teams in the final, only three other dives broke 90 points: one from the Russians, one from the British and one from the Australians.

The biggest dive for China was a back three-and-a-half with a 3.6 degree of difficulty – that was the 97-pointer that all but sealed the competition with three dives still remaining. Cao now holds golds in both men’s synchro events this year. Chen wins his third-straight men’s 10-meter synchro gold with his third different partner.

Russia finished solidly second with 444.60 points. Viktor Minibaev has now medaled in this event at the past four World Championships, but it’s the first medal for Aleksandr Bondar since a 2011 bronze while competing for the Ukraine. Minibaev won silver in 2013, 2017 and 2019 and bronze in 2015.

Great Britain’s team of Tom Daley and Matty Lee took bronze. That’s Great Britain’s second medal of these Championships in diving. Daley and Lee tied Cao and Chen for the highest single dive of the competition, scoring 97.20 points on a back three-and-a-half in round three. They were actually running second at that point. But a 57-point dive in round four sunk them below the Russians.

With 13 total events, China has now officially won half of the total gold medals. They’re also just one gold away from matching their golds total from the entire 2017 World Championships. China won 8 golds and 15 total medals at the last World Championships.