Cesar Cielo Laments His Recent Treatment by the CBDA 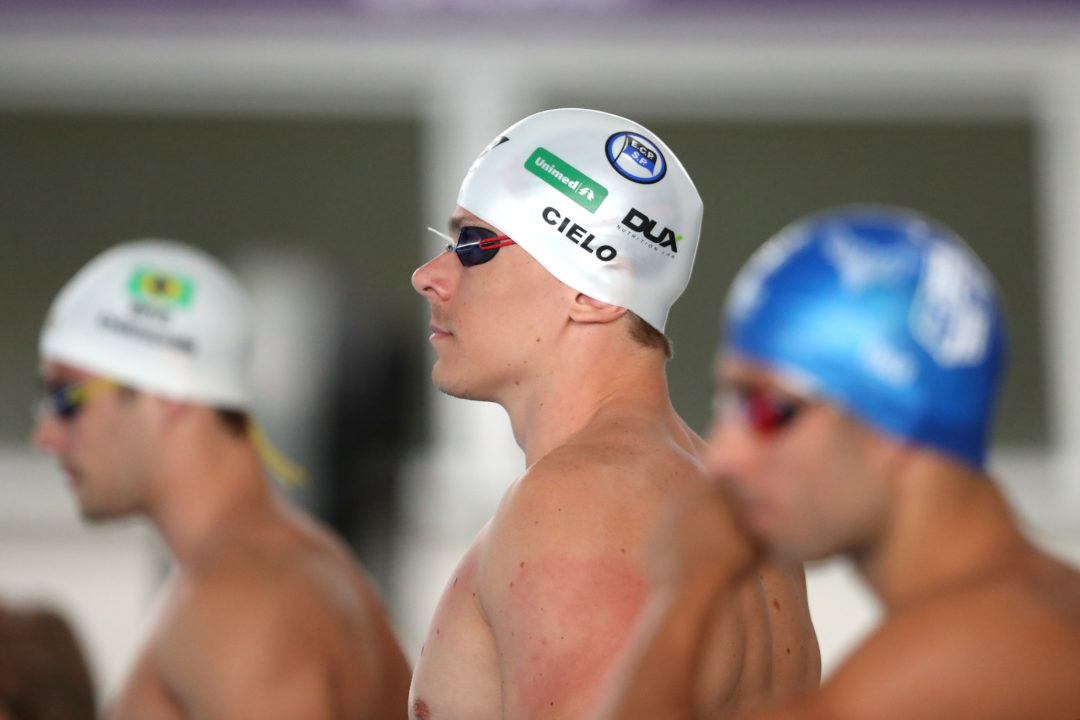 Olympic champion Cesar Cielo – who after much speculation is not retiring this year, but may do so next– is... Archive photo via Satiro Sodre/SS Press

Olympic champion Cesar Cielo – who after much speculation is not retiring this year, but may do so next– is currently without a team, and thus, without the support of the Confederação Brasileira de Desportos Aquáticos (Brazil’s aquatic sports governing body) because he is not attending the nation’s major 2019 meets.

Despite having 2020 Olympic aspirations, Cielo feels the CBDA has given up on him.

As we reported earlier this month, the 32-year-old cut ties with his club team of two years, Pinheiros, in February, and has been practicing at the Olympic Training and Research Center (COTP) in the city of São Paulo. Cielo is being coached privately by former Pinheiros coach Regis Mencia. Cielo previously trained at the COTP from 2011-2013 when he launched the elite training group PRO 16, which fizzled out due to a lack of sponsors.

He’s using prize money to pay Mencia and is not receiving funding from the Brazilian Olympic Committee or CBDA, as he’s no longer on Brazil’s National Team.

“I’ve never swam for money, but some of the money I’ve earned in competitions, which I’m invited to, is currently helping me play my coach. It is a high expense but I prefer not to talk about values,” Cielo told Brazilian site Globo Esporte (translated from Portuguese). “For now I am investing in myself, I have no help from the COB (Brazilian Olympic Committee) or the CBDA. This is the current situation. By the way, the CBDA has retired me but I have not yet. I have no financial support from them or others.”

While figuring out his team situation, Cielo has opted not to compete at the Brazil Trophy (formerly Maria Lenk) in April, which serves as Brazil’s qualifier for both the 2019 FINA World Championships, to be held in July, and August’s Pan American Games. This will be the first FINA World Championship without Cielo since 2005, but does signal that he is aiming to swim through the Olympic quad, despite speculation that he would retire this year.

“I do not even have a club! I want to refresh my head and train in peace,” Cielo said. “I see no reason to compete in these competitions. If I decide to train in earnest, it will be only for Tokyo.”

Making the 2020 Games could hinge on having a relay spot – but Cielo was not invited to Brazil’s 4×100 freestyle relay camp held in January for the nation’s top eight male swimmers, based on 2018 ranks. Cielo was the nation’s eighth-fastest man in the 100 free in 2018, at 49.29. But according to Cielo, the CBDA did not allow times swum leading off relays, as he did at Brazilian Nationals, to count for qualification. Cielo was also the third-fastest Brazilian in the 50 free last year (22.01).

The CBDA told Globo Esporte: “as soon as the athlete returns to the scheduled competitions and obtains his classification, he will be very welcome to the activities of the Brazilian National Team.”

Cielo is the most successful Brazilian swimmer in history. If 2018 Worlds ends up being his last major competition, he would retire the fastest man in history in both the 50 and 100 freestyle (LCM). He set both records in 2009 during the super-suit era. He’s also won three Olympic medals – including Brazil’s first ever swimming gold in 2008.

Sucks seeing a star fade. He used to be my favorite to watch if only for his chest beating antics and wild race celebrations. Never knew if you were gonna get screams or tears with this guy. What an animal. I would love nothing more than an ervin-esque comeback but Dressel and Proud are pretty large roadblocks. Best of luck Cesar

He can always come to the States to swim with a pro group. If all he wants to swim is the 50, maybe he can train with MA.

Not much of team player for what I’ve heard.

“Lots of people are saying…”

Hmmm. He’s upset that he’s getting no support but isn’t attending any meets and has run through every coach in both Americas. Have a snickers you’re acting like a diva.

The only LCM World record holder I think that country has ever seen. Still holds it, despite all the hype about motorcycle man. So yeah, he probably deserves to be a bit of a diva. And on the scale of things, compared to the NFL and NBA divas, he’s not even on a top 100 list.

Two others: fast guy. Motorcycle man’s been as fast as he’s going to go.

Ah yes. My encyclopedic knowledge of Brazil swimming WRs pre-1983 fails me again. I do remember Prado. Seriously, though, a trophy meet named after a breastroker?

And one who could not get any olympic medal due to WWII. at 1939 she became WR Holder on 200 and 400 Breaststroke, she was bound for success for the next years but never got the chance.
She was also the first female swimmer to swim Fly in an official competition.

When she died she held 5 master World records.

Sad for this news, I really think that Cielo don’t deserve that situation in his country.
A gentleman in the pool and without the pool too; an example and inspiration to thousands of swimmers worldwide.
As you wrote: “Cielo is the most successful Brazilian swimmer in history” and many others success like the current world record and the first swimming gold medal fr Brazil. It’s a great fact hi is still in the water trying to maintain a good sport shape in that conditions.

If you’re devoting yourself to swimming and your countries swimming federation says you need to be on the national team to receive funding…. why not just compete? If he doesn’t want to, that’s fine. But they haven’t acted as if he’s retired like he’s said, they’re just acting like he’s not a member of their national team… which he isn’t. Caesar seems to be throwing a fit because he’s at odds with the CBDA and doesn’t want to play by their rules.