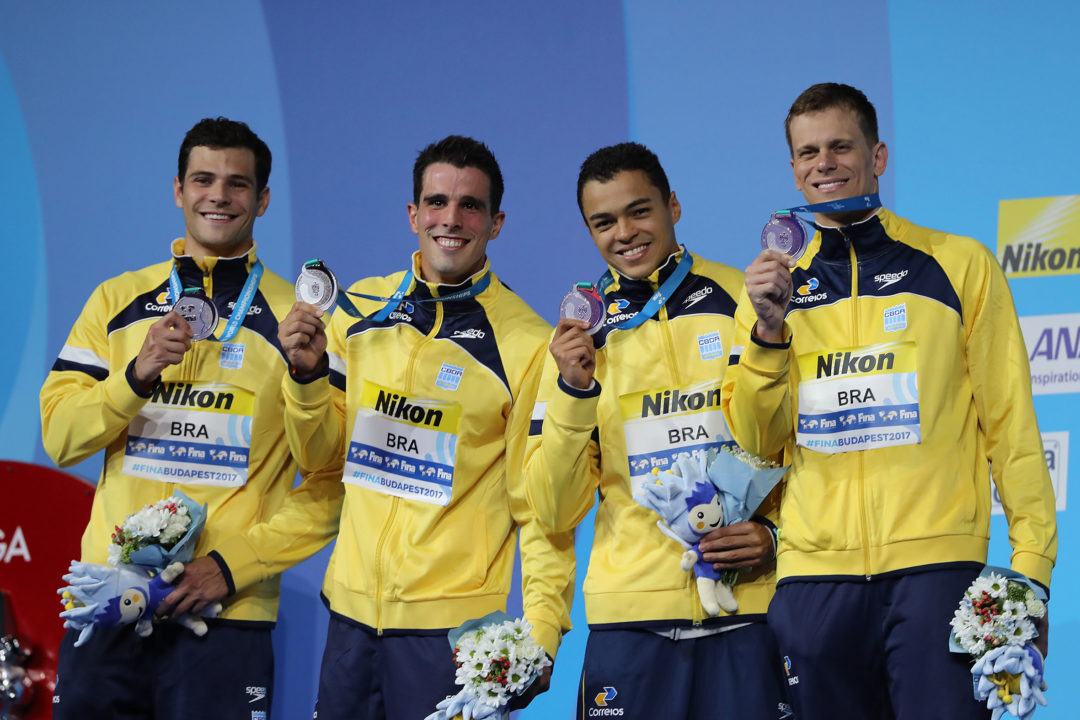 Brazil will hold a pair of relay camps for their men's 4x100 and 4x200 free teams as they hone in on those events heading into the 2020 Olympics. Archive photo via Satiro Sodre/SS Press

Following their major successes in 2017 and 2018, Brazil will be hosting a pair of training camps for their men’s 4×100 and 4×200 free relays as they hone in on those two events heading into the 2020 Olympic Games in Tokyo.

Identified as a strategic focus by the CBDA (Brazil’s Confederation of Water Sports), and with support of the COB (Brazilian Olympic Committee), a camp consisting of the top-8 ranked men in the 100 free nationally from 2018 (long course metres) will take place at the Maria Lenk pool in Rio de Janeiro from January 22-26. The swimmers and their coaches will have three days to train together.

Based on the 2018 rankings, the invited swimmers are:

*currently pondering retirement, whether or not Cielo will be in attendance is up in the air. Andre Luiz Calvelo de Souza would be next in line (49.47).

The swimmers ranked 9th-20th are also welcome to participate in the camp, but will be responsible for their travel, accommodations and meals.

This relay has found Brazil plenty of success over the last few years on the international stage. After swimming in the final of the event at home at the 2016 Olympics, the team of Santos, Chierighini, Cielo and Fratus won silver at the 2017 World Championships behind the United States in a South American Record time of 3:10.34.

Then this past summer, Santos, Chierighini, Ferreira Junior and Spajari combined to win gold at the Pan Pacific Championships in 3:12.02. The team had initially touched 2nd to the U.S. (0.28 back, which is actually the exact same margin they had finished behind them in Budapest), but the Americans ended up being disqualified for swimming the wrong order.

This relay also won bronze a few weeks ago at the Short Course World Championships in Hangzhou, which is also where they had a breakout performance in the 4×200 free relay as they won gold and set a new world record in a time of 6:46.81.

That relay will also have a training camp that will occur in February with the same criteria. The eight swimmers expected to be there will be:

Shortly after competing at those Worlds, Scheffer set a new South American Record in this event in 1:45.51, ranking him 4th in the world for 2018. While this relay hasn’t seen the same success as the 4×100 in recent years (14th at the Rio Games, didn’t enter a team at 2017 Worlds), the quick emergence of swimmers like Scheffer, Melo and Correia give them high hopes for the future, and their performance at SC Worlds is obviously a sign things are on track.

The original article from Globo.com is available here.

I really like this idea. I bet it’ll be a very cool training environment, even if it’s only for 3 days.

No women? Imagine if the US did this and did not invite the women? Some may say that Brazil’s female relays are not competitive, but then I would say that they might me with equal focus as their male counterparts.

Canada did it…. it’s a little more common than you think. I’m sure they offer the same camp just on different dates and locations.

In fairness to the federation, I think this is a pretty astute move. They’ve seen medal potential events and have reacted really quickly to maximise the potential. Concentration on Brazilian female swimmers would of course be welcome, but relay camps would be futile at this point.

Girls still need to put on some work and build a team inside their clubs, build a name and tradition for themselves.
The system in Brasil is a bit (A LOOOT) difference from the US.

This is a pretty smart move in terms of chasing medals as a first priority, and then developing the swimmers for individual success as a close second priority. Free relays can overcome event depth by other nations with four strong swimmers. Just look at how France has, for all intents and purposes, over-achieved on relays since 2012 (even with their two silvers in ‘08 and ‘16). USA, AUS, GBR, RUS, BEL, and ITA can only put 4 swimmers at a time on their relays. BRA could be betting that 4 really solid legs who have developed a team mentality, worked on exchanges together, and motivated each other, can put them in position for a minor medal. If the unexpected happens,… Read more »

I.would not say unexpected remember Brazil got quite close to us on world’s and a team capable of all splitting 47 for 2019/2020 with Gabriel spajari chiereghini Breno fratus is very strong
Also scheffer altamir Breno can probably go 1:46 flat open and split 1:44 easily question is the 4th leg

DeLucca has the potential for a 1.46 if returns to good form, and Leo Santos lowered 1.43 in short not being prepared to this rev, as he is a medley swimmer