Cate Campbell: “It’s Not A Final Without Sarah Sjostrom” 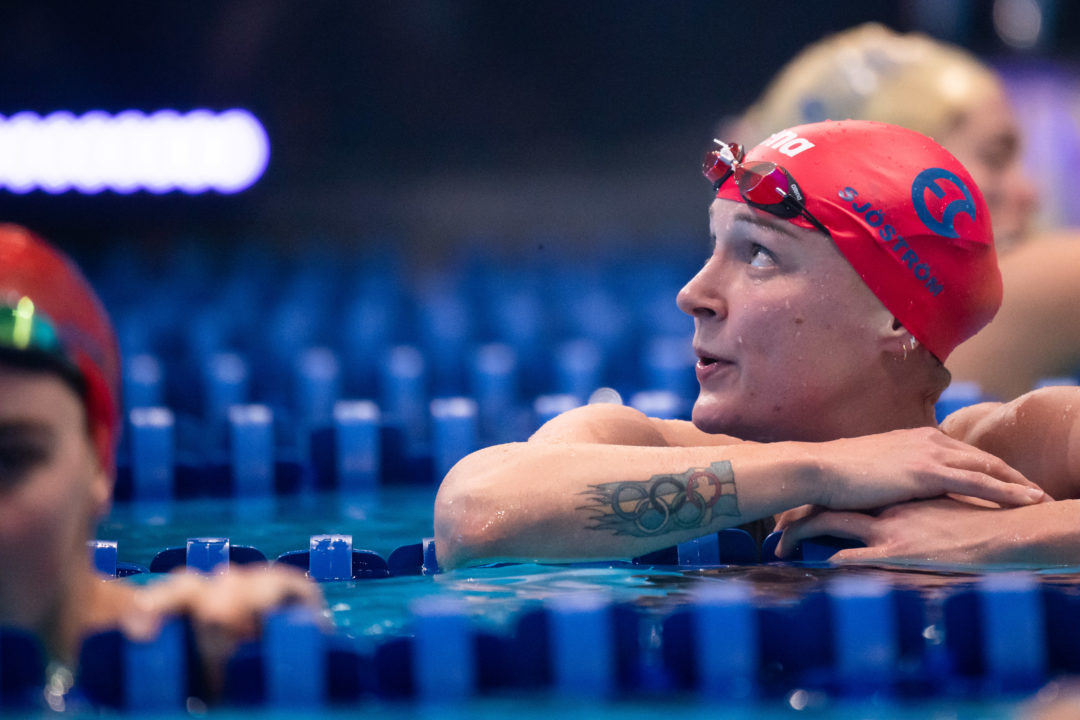 “It is not a final without Sarah Sjostrom in it. It is heartbreaking for her," says Aussie Cate Campbell regarding fellow sprint ace Sjostrom's broken elbow. Archive photo via Mike Lewis/Ola Vista Photography

Multi-Olympic medalist Sarah Sjostrom gave us a glimpse into her arm’s mobility following surgery she underwent earlier this week for a broken elbow. Her Instagram post today shows the Swede making measured movements with her arm, now without a cast and merely wrapped in bandages, although metalware lurks beneath’s the skin’s surface.

“Thank you guys for all your amazing support. 🙏🏻❤️🥺 It gives me alot of strength 💪🏼
I’ve been quite tired and sore after Elbow Surgery, but it went really well. Rehab has begun. Baby steps. 👌🏼”, is the text accompanying Sjostrom’s video.

Sjostrom slipped on ice in her native Sweden over the weekend, which resulted in her being taken to the hospital via ambulance. It was revealed she had broken her elbow, with the swimmer’s entire arm encased in a temporary cast and sling.

At a post-surgery press conference held by Swedish team doctor Rene Tour on Monday, February 8th, he estimated Sjostrom may not be able to return to her regular training for 3 to 4 months, leaving her Olympic participation in serious doubt.

“My interpretation is that after 3 months she should be able to load the maximum,’ Tour said, with the opening ceremonies of the postponed Olympic Games set for July 23rd, now just 165 days away (5 months).

In the days following Sjostrom’s fall, the world record holder has received support from around the world. Along with Japanese superstar and leukemia survivor Rikako Ikee‘s message of hope, Aussie Olympian Cate Campbell offered up words of encouragement to her recurring sprinting rival.

Speaking to The Australian this week, from an Australian National Team camp, Campbell said of Sjostrom’s situation, “I went onto Instagram and saw this photo of a pale-faced Sarah with her arm in a cast and my heart just dropped for her.

“It is devastating. But never count Sarah out. Do that at your own peril. And if she needed any extra motivation to get back, she’ll get there. She is as tough as they get. Thank goodness we don’t have ice in Australia, right?

“It is not a final without Sarah Sjostrom in it. It is heartbreaking for her. I know she will be doing everything in her power to get back. We try and look for meaning but sometimes life just doesn’t go your way and it’s a nice wake-up call for everyone to remember how privileged we are to be in a position to look to qualify for an Olympic team, because it can literally change in the blink of an eye.”

Emma McKeon, who shared the 100m fly podium with Sjostrom at the 2019 World Championships, said “I’m upset for her.

“Nobody wants that to happen to them and especially this year. I know she would have been working so hard so I am really upset for her, but I also know she is a tough athlete and I know she will be in Tokyo.”

This is why I love swimming. A competing community

That’s amazing she’s already moving her arm around only a few days after surgery, I know they put plates and screws in but I always imagined there would be a time frame where it had to be kept stationary

Movement will be limited for a while, but recovery will be much quicker! Sometimes they use a ‘cement’ that really speeds things up to.

Sarah still can reach over to any tasty morsels on the smorgasbord.with the left hand.I like that she has colour ordinated her singlet & blanket. .

I have had the misfortune of having the same experience as SS (Twice!) and both times I had to keep my arm immobilized for about week after surgery, so I am a bit surprised that she is already moving.

On the other hand, she is a world class athlete in peak physical condition training for the Olympics, while I was a skinning college student with a connective tissue disorder so I suppose her drs. are comfortable with a more aggressive approach.

Pathetic dig a whole and live in it

She had the class to say something kind about a rival who had an unfortunate, ill-timed accident after the Olympics had already been postponed for a year. Please do shut up.

I’m sure she is thankful for your support

In no way did she indicate she was worried. She said a final isn’t complete without her, an ode to the number of finals she’s been in over the years. Simple

And how many finals have you lit up Sparkle? Crawl back under your rock.

You are suffering from lockdown rage. We are all here for you Sparkle. One Love xx

What I wouldn’t give for Cate Campbell to win an individual gold in Tokyo. Such a class act in and out of the pool.