Cate Campbell on 100 Free: “Everyone Is the Hunted! I Am the Underdog” 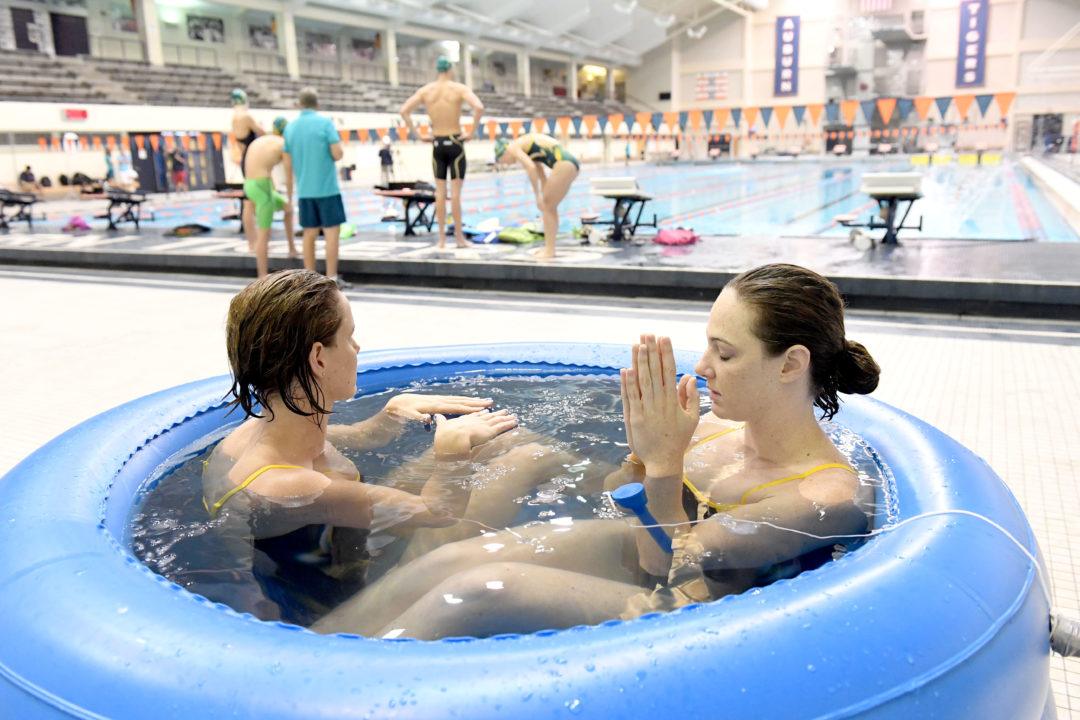 Some of the Australian Olympic swim team members spoke with the press yesterday about the upcoming Olympic Games. Cate Campbell and Matt Abood were two swimmers who spoke yesterday, with Abood talking about making his first-ever Olympic team and Campbell emphasizing that she does not see herself as a favorite for the 100 free. The Australian swimmers have a few days left at their training camp at Auburn University before they fly down to Rio for the Games.

Read about the Australian Olympic team’s press conference below, courtesy of Swimming Australia:

The Australian swim team went under the microscope in Auburn today when the doors to the University aquatic centre in Alabama were opened to the media for the first time since they arrived en-route to Rio. A large contingent of media arrived from Australia combined with a lot of interest from the local US media following the team’s arrival for their pre-Olympic staging camp.

Abood is the oldest Olympic rookie on the swim-team at 30-years of age and said he is not taking anything for granted and is going to make the most of his time in Rio.

“I’ve waited so long and I don’t want to look back on this in 4, 8, 10 years’ time and think, ‘Oh what did you do when you got there? There’s still a job to do, and having waited so long and worked so hard to get there, I’m going to make sure that I do that to my best ability,” Abood said.

While Campbell, who will be off to her third Olympic Games, was quizzed about being the ‘hunted’ in the women’s sprint events, but was adamant she will still go in as the underdog.

“Well when you say I’m the ‘hunted’, I’ve got a dual world champion training next to me every day, sleeping in the bed right next to me every night, in the race in Rio there’s going to be a dual Olympic gold medallist, there’s probably also going to be a world record holder in the 100m butterfly, like who is the hunted? Everyone is the hunted! And so I think that you can never take anything for granted and the great thing about the Olympic Games and why we love it so much is that anything can happen. Crazy things happen. And so you never want to take your eye off the ball and as far as I am concerned, I am the underdog and that’s the way I approach every race and that’s the way you give 100%, you leave nothing in the tank because there is always someone out there that wants it more than you,” Campbell said.

The Australian team photo with BK – the Olympic team’s official mascot front and centre – then drew a lot of attention as “Land Down Under” and John Farnham’s “The Voice” came blaring through the pool’s speakers. It put the finishing touches to Australia’s Olympic preparations for what has been a “sweet home” in Alabama.

The 37-strong Australian team then set about their mid-morning training to replicate the Rio time change and scheduling of the later daily heat sessions. Some athletes will return to the pool tonight and will continue the late night training to mirror the later competition time. They have also been encouraged to wear the special adjustable “night glasses” designed to help maximize sleep and rest time outside their normal sleeping routines.

The team will fly into Rio on Sunday on a Charter flight from Atlanta, arriving at 10.30 pm and will travel straight to the Village to the Village, before a tour and their first look at the Olympic pool.

And the message from wily head coach Verhaeren to his team will be to waste no time “getting some sleep” before their first day in of the Village next Monday.

Interesting choice of word by Cate.
The gap between her and Sjostrom this year in 100 free (0.8 seconds) is actually significantly larger – in percentage term-than the gap between Ledecky and Smith in 400 free (1.7 seconds).
Her little sister is closer of course.

One more so expected world record, Cate. Please. That is what “underdogs” usually do. 🙂

Brilliantly said Cate… great to hear a realistic assessment of what you are facing… nobody can take away from you what you have already achieved, so instead of it adding pressure… just draw confidence from it, as “you have already been to… where everybody is aspiring or hoping to go!” So good luck kid, be tough and give it your best shot… that’s all anybody can ask for!
Much respect, Sutto

The lady IS a class act in either victory or defeat …. same can basically be said for little sister. I don’t know if her body will see her through another full Olympic cycle so it would be some justice if she can snag at least one individual gold.

She’s not the underdog, but she knows she’s got lots of competition.

She’s lost at major meets in the past, like the World Championships and Commonwealth Games.

In the photo, it looks like she’s meditating or doing some mental training/visualizing.

Oh plotting how to keep upstart little sister “back in her box” ??

It will most probably require illness or injury to take her down in the 100. The 50 is where she is more vulnerable and where she was beaten at 2013 Worlds & 2014 CG. She has to be seen as favourite in that one as well but 50’s will always have an element of ‘crapshoot” about them and this is where her relative weakness off the start can hurt her more.

However, if ANY Australian is going to double up individual golds, she has to be seen as by far the most likely suspect

Sure she’s an underdog. If she swam against the guys…