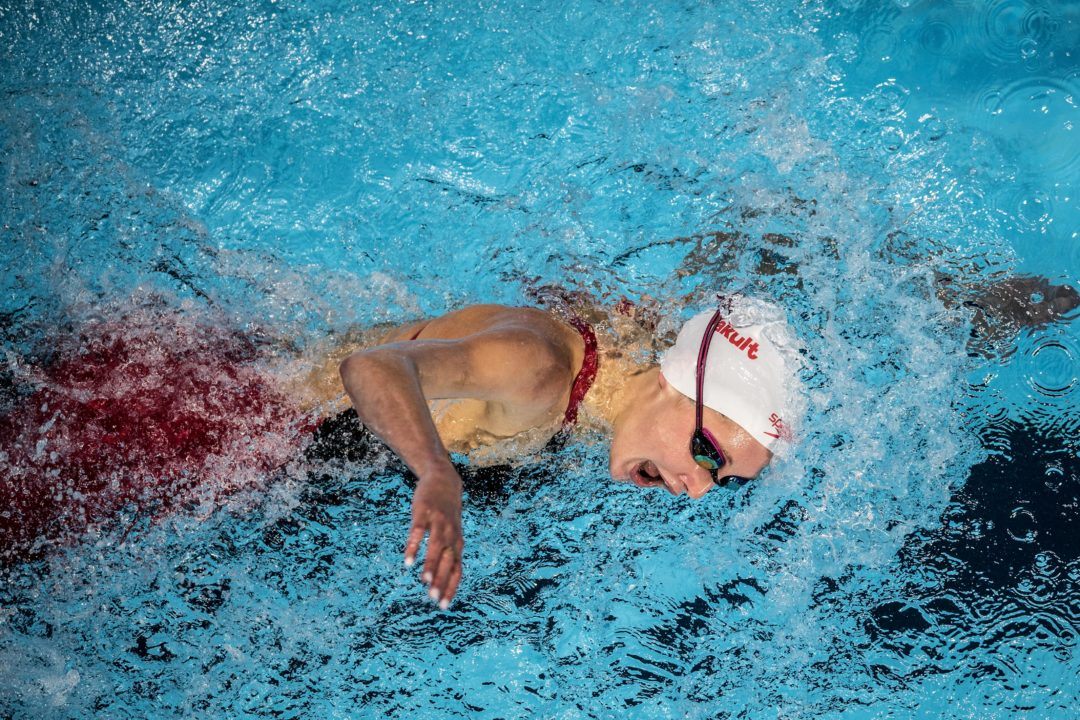 Four Canadian teenagers had incredible showings in the 100 freestyle over the weekend, bringing a lot of intrigue as to what lies ahead. Archive photo via Mike Lewis/Ola Vista Photography

The Canadian women’s 400 free relay had their first real breakthrough at the 2015 Pan American Games.

Competing in front of a raucous home crowd, Chantal van Landeghem roared home on the anchor leg to overtake American legend Natalie Coughlin and out-touch her for the gold. That Canadian squad was full of veterans, and though later that summer at the World Championships they would finish in the same position they did two years prior in Barcelona (5th), a new level of confidence began to grow.

The next summer in Rio, two of those veterans, van Landeghem and Sandrine Mainville, combined with rising stars Penny Oleksiak and Taylor Ruck to win an Olympic bronze medal in the event. Last summer without Ruck, another teenager in Kayla Sanchez stepped in and the team finished a respectable 4th. This year, despite the retirement of van Landeghem, the relay looks like it may be in its best shape yet, and there’s no better showcase of what they have in store than how the Canadian teens performed this weekend.

Combined, those four times added up comes to 3:36.61 – not factoring in relay exchanges – which would’ve placed 6th at the 2017 World Championships (excluding the 4th place Canadian team). These are incredible times to be posting in general for four teenagers from the same country, but for it to be done in early June is what is astonishing.

Beyond the times having been posted so early in the LC season, the potential to get better is what’s most exciting about the Canadian quartet. Ruck has been as fast as 52.96 this season, and is coming off an incredible Commonwealth Games performance. Sanchez’s swim in Canet was an improvement on her fully tapered lifetime best from the Commonwealth Games, and Smith is right there as well coming within six tenths of her all-time best.

And for Oleksiak, her recent move to train in Florida with Gregg Troy really seems to have rejuvenated her after a so-so Comm Games and has looked really sharp at her last three meets in Atlanta, Vancouver and now Santa Clara.

The Australians currently have a stranglehold on this event after their world record in April, and the Americans will always be a big threat with their talent stacked crop of sprinters, but the Canadians are right there and it’s going to be very interesting how things shake out, not only come Pan Pacs, but 2019 Worlds and then 2020. The sky is the limit for these four.

I have been watching these young Canadian women with interest for the past 2 years and it is certainly amazing to watch their development. These same 4 ladies absolutely crushed all comers at the 2017 World Junior Championships…it wasn’t even close. I’m sure there will be some ups and downs over the next couple of years, as there is with all development in this sport. The constant factor with all 4 ladies besides youth, tremendous talent, and the deep desire to win? Ben Titley, the Englishman hired by Canada has trained all 4…not necessarily always at the same time, but it seems as though he is the coach behind the upward trajectory for all of them. Gotta give this coach… Read more »

If at least one of the young Canadian breaststrokers can progress to world class level (can final at worlds/OG) then the medley relay would probably be even more impressive than the sprint relay. Book ended by Masse and Ruck with Penny on fly. Just need that last piece.

Theres 2 potential up and comers – Faith Knelson and Bailey Hebert

You are correct, if Canada develops a 1.05 breaststroker, we (USA) have a serious race on our hands in the 4×100 Medley.