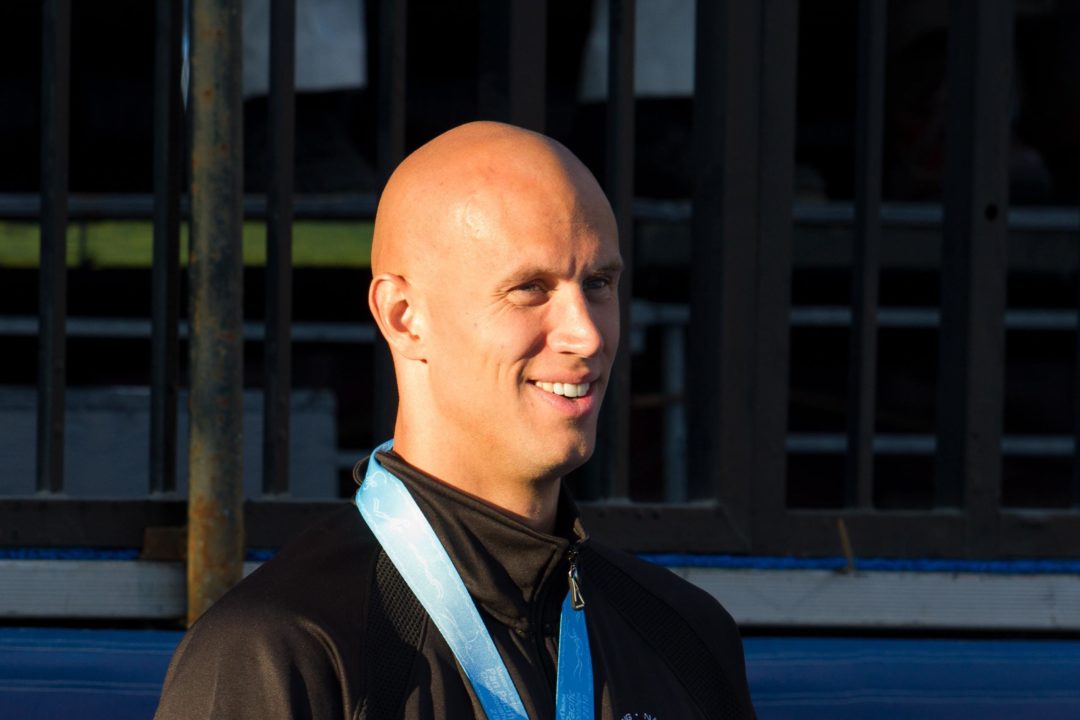 Brent Hayden, 2012 Olympic bronze medalist in the 100 freestyle, has announced his return to the sport competitively with a focus on making it to Tokyo. Archive photo via Tim Binning/TheSwimPictures.com

Brent Hayden, 2012 Olympic bronze medalist in the 100 freestyle and Canadian record-holder in the 50 freestyle, 100 freestyle, and 200 freestyle, has announced his return to the sport competitively. He will be training with High Performance Centre-Vancouver.

Hayden has taken seven years off from the sport, but he’s back to training with his sights set on the 2020 Tokyo Olympic Games. His last big race came in 2012 when he won his bronze medal in the 100 free at the London Olympics in 2012. During his career, Hayden earned 22 medals between various Olympics, World Championships, Pan Pacific Championships, and Commonwealth Games.

“I didn’t like the way I retired,” said Hayden in a press release from Swimming Canada. “I retired because I hated the sport because of how things were playing out in my life. I realized I have a chance to fall in love with the sport again.”

Hayden, nearly 36, hopes to make it to Tokyo in the 50 free and perhaps the 100 free, according to the release.

“I think the 50-m is the most realistic,” said Hayden. “Historically, if you look at sprinters, 50-m freestylers have a longer life span. You can keep developing your power and aerobics a lot longer than your endurance that the 100-m requires.”

There’s certainly evidence to support that sprinters can have success later in their careers (as well as between bouts of time off). American Anthony Ervin made the 2000 Olympic team at age 19, then took periods of time off only to return to make the 2012 Olympic team, and then finally win gold in the 50 free at the 2016 Olympics at age 35. American Dara Torres won three silver medals at the 2008 Olympics after taking years off earlier in her carer; she was 41 in Beijing. Swede Therese Alshammar made her sixth-straight Olympic team at age 38 in 2016.

Hayden spent three months in Lebanon with his wife, Nadina Zarifeh, and her family, this summer. There, he began swimming in an outdoor pool, where he says he felt good in the water.

“Things that I thought would have been gone were still there,” he said. “My technique felt amazing. Little quirks in my body that were always kind of annoying weren’t there anymore. I actually felt fresher.”

“When Brent contacted Swimming Canada about his return to competitive swimming we discussed his plans and ambitions, then we fully agreed and supported his return,” said John Atkinson, High Performance Director, Swimming Canada. “I am happy to say our High Performance Centre in Vancouver based at the University of British Columbia will be working with Brent to support his return. He is an accomplished athlete at the highest level, and we welcome him back to the sport.”

“I see nothing really standing in his way of being able to do it,” said HPC-Vancouver coach Tom Johnson. “You can never underestimate him, because when he puts his mind to something, he is singularly focused and able to do it. He’s also a lot more mature. There’s a sense purpose about what he’s doing.”

The 2020 Canadian Olympic and Paralympic Trials will be held next spring in Toronto, roughly five months away.

At his absolute best, Hayden is most lethal in the 100 free, with his best time of 47.27 good enough to have won bronze at the 2019 World Championships.

While the Candian national team has seen a spike in performance and achievement, much of the recent success has come from the women’s side with juggernauts on the world stage like Kylie Masse, Taylor Ruck, Penny Oleksiak, and Maggie Macneil. Their men have some impressive age group talent right now alongside a few older standouts like sprinters Yuri Kisil and Markus Thormeyer.

“It’s exciting,” Hayden said. “Before, I never experience life without swimming. You just kind of fall into a routine. A lot of days it’s like walking into a job. It’s a chore.”

“This time I’ve made the choice to come back. Every day I come here it’s a blessing. Even when I’m in the middle of a really hard set, and I feel like I just want to vomit, I can’t help but smile and be so thankful I’m here right now.”

He do training already more one year. I look her instagram.

NO Kidding !!! thats a Talll Order but everything is possible . Good luck to the best Canadian sprinter

He was never really that good in the 50, so if he needs an A Cut to qualify in the 50 for Tokyo I doubt he can achieve that. However he might have an outside chance of making the team in the 100 or if the Canadians are able to qualify the 4x100Fr

That old man strength may come through. If he’s no longer experiencing the back problems he had all those years ago he could have a legit shot at the 100 too.

he might have done some yoga stretching exercises for his back since 2012 ….

Good Luck Yuri with Brent back!

His 47.27 was done in a LZR suit, I don’t think it is right to put it against times swam in jammers. His 47.8 from London is a better point of reference, though more than 7 years old now.

The Jaked suit was superior at that moment in time but Hayden swam in a Speedo LZR because …..well I’m not sure why.

Because he honored his contract with Speedo and didn’t jump ship like many others. His integrity showed and it cost him a WR and medal in 2009 Worlds. Not sure if he was ever recognized behind the scenes for that.

People’s champion from 2004 to 2012. A hero to all swimmers who never won or dominated but put in the hard work, and improved to go from just making finals to making the podium.

32
-1
Reply
bear drinks beer
Reply to  Who is Hayden

1
-2
Reply
NJones
Reply to  Who is Hayden

Hayden was quietly THE most consistent high end 100m Freestyler in the world from 2006-2012. In that time period he was top 4 every year at every international meet, including wins at Pan Pacific, Commonwealth Games and World’s. His only ‘blip’ in that time frame was one race, the 100 free semis at the 2008 Olympics where he had the Canadian men’s 4*2 relay on his program shortly after in that session that was gunning for a medal. Very few swimmers have been close to that consistent in that event over the years.

Did not see that coming. Good news for Canada’s men’s relays if he get in good shape.