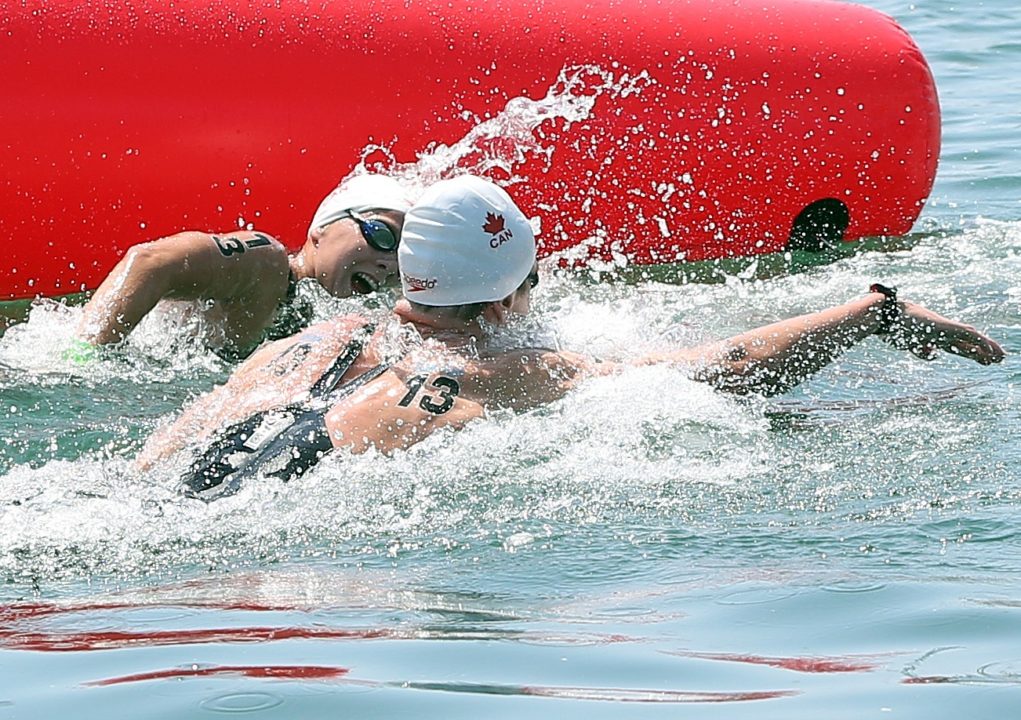 Swimming Canada has announced that it has canceled the open water qualifiers for the FINA World Championships next year. Archive photo via Swimming Canada/Ian MacNicol

The trials, which were supposed to take place in Grand Cayman in the Cayman Islands from November 27-28, were canceled due to COVID-19. The Cayman Islands will remain in Phase 3 of its reopening plans through the end of the year, a phase that requires travelers to remain in quarantine for a minimum of seven days, even if fully vaccinated.

Instead, Swimming Canada will offer spots to compete at the FINA World Championships to swimmers who competed at the 2020 Tokyo Games. Kate Sanderson and Hau-Li Fan competed for Canada in the open water events. The World Championships will take place during the back half of May in Fukuoka, Japan.

All remaining open spots will be filled based on the 1500-meter results at the 2022 Canadian Swimming Trials, taking place April 5-10 in Victoria. The trials will also serve as the selection process for the 2022 FINA World Junior Open Water Swimming Championships, Swimming Canada noted.

“We had hoped to conduct the event in November, but it would not be possible to run an event in the Cayman Islands effectively with all participants needing to quarantine for seven or more days,” said High Performance director and national coach John Atkinson in a press release. “While we looked at other locations with appropriate climate, all came with too much uncertainty to ensure we could run a fair event for all Canadian competitors. Unfortunately we had to make the decision to cancel the Open Water Trials on Grand Cayman.”

The cancellation means that Canada hasn’t swum an open water qualifier since before the 2019 World Championships. A committee selected the four Canadian swimmers for the Olympics open water qualifier in 2020 after the nation’s own Olympic Trials selection-style event was canceled.

By 2022, it will have been close to four years without a chance for a young open water star to break into the competition.

“All remaining open spots will be filled based on the 1500-meter results at the 2022 Canadian Swimming Trials” What an absolute joke move. Next we’ll be using the 50m freestyle to qualify for the 800m. Wonder if Athletics Canada has ever considered using the 5km to pick the marathon team.

Really feel for the Canadian OW swimmers with this decision, feels eerily as disappointing as Aussie OW swimmers have had to endure over the last 2 years. At least we have had our National qualifying swims but our qualified swimmers have missed all opportunities to do anything or go anywhere with these qualifying swims (talking primarily about up and coming age groupers…the Opens had Olympic qualifying swim) Ever been named on a national team and gone nowhere from it….not even a team uniform as proof of your efforts? Some Aussies have.

Stay strong if you are a Canadian OW swimmer reading this….your time is coming.

The USA, UK, France, Italy, etc. have had 2.5 to 3+ times more Covid cases than Canada, yet Canadian hospitals have been just as stressed and the case fatality rate has been the same. Justine Castro, er Justin Trudeau, has been draconian and screwed Canada over and over. It was the only G7 country not to finish in the Top 10 at the Olympics. Even smaller Australia and the Netherlands managed that.

I think each country have vastly different health care systems and capacities. Challenging to compare simply based on total number of cases.

Regardless, Canada, the land of a thousand lakes and rivers and they can’t get an OW trials on their own continent?

Water is a bit chilly in Canada after September

why would they have to wait until now..the water is fine in August

Does this mean we might see summer swim some open water?