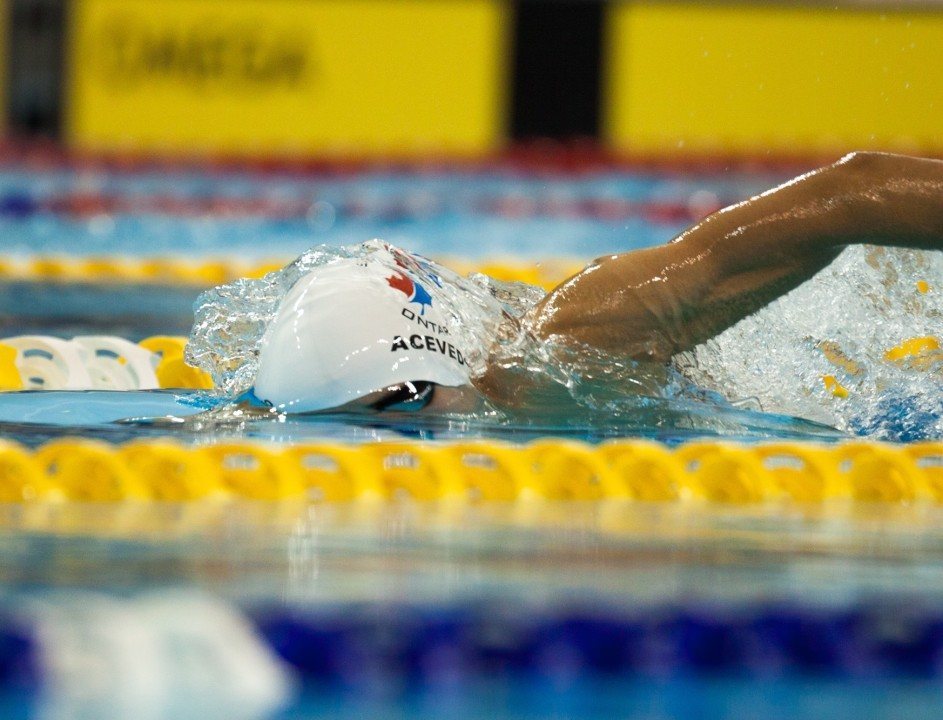 Canada announced their rosters for the 2015 World Championships, 2015 Pan Am Games, and 2015 FISU Games following the completion of the 2015 Canadian Team Trials. Current photo via Chris Tanouye, christanouye.com

Canada announced their rosters for the 2015 World Championships, 2015 Pan Am Games, and 2015 FISU Games following the completion of the 2015 Canadian Team Trials.

The roster for the Worlds teams features a 24-swimmer roster. Swimmers such as Ryan Cochrane, and Katerine Savard highlight the small roster.

After enough ups-and-downs for a lifetime, Kierra Smith was named to both the Worlds team and the Pan Am Games team.

New to Canadian swimming, both Santo Condorelli and Karl Krug were also named to the worlds roster.

The Pan Am Games team features a much larger roster with 18 men and 18 women to round out it’s 36-swimmer team.

Brittany MacLean was named to the roster. She’s been battling injuries all season and wasn’t able to compete where she wanted to this weekend, meaning she made the team most likely under ‘priority 3’ of the selection criteria.

The Canadians will put forth three relays on both the men’s and women’s sides at the Pan Am Games. The Games will be held in Toronto in July.

HPC Ontario head coach Ben Titley was named the head coach of the Pan Am Games team. His swimmers went 1-2-3 in both the 50 and 100 freestyles.

For the FISU Games is sending eight men and eight women to represent Canada. Some of the stars of that team will be breakthrough swimmer Kylie Masse, Denver swim star Sam Corea, Jacomie Strydom, and Barbara Jardin.

On the men’s side James Guest, Jon McKay, Eli Wall, and Keegan Zanatta are some top swimmers who could bring success to Canada.

Looks like Atkinson selected enough men to put together solid 4×100 free and 4×100 medley relays. I’m pretty happy that Atkinson didn’t select only from priority 1 of the selection criteria for worlds, and putting together the top 4 swimmers for all relays on the women side.

Nice work this week Mitch. Thanks for so much Canadian coverage. #ryerson

Thanks a lot for all this coverage Mitch.

Does anyone have an idea why Javier Acevedo (third in 100 free, ahead of Van Moerkerke and Krug who are both going to worlds) isn’t on any of these teams? Did he decline selection?

Not sure what went into the decision making process there. He is on the junior worlds team so I’m guessing that somewhat effected the decision ,whether it was his or not.

I’m right there with ya matt, i think personally that he should be on the team along with or instead of one of em. its unfortunate but he was probably bumped due to his age and they wanted more overall representation between both junior and the senior stages internationally. although he will most definitely be placed on the world junior team, i think he earned his right to the relay spot.

Acevedo would probably benefit more from a meet were he is competing for the podium in multiple events (junior worlds), as opposed to being a relay only swimmer at Sr. worlds.

He can swim them both then.
Worlds ends August 9th and Juniors is August 25th to 30th

And lets be honest Atkinson is not making decisions based on what’s best for the swimmer. Last year he promoted younger swimmers to swim at Commonwealth Games unjustly, while by passing those who should have been on the team. Those swimmers DID NOT shine at this meet. It did nothing for them and it was not positive for those that were passed over.

I disagree Acevedo can swim all three meets and get the experience on the senior stage rather than only world juniors. Acevedo along with others on the junior worlds team could have made the pan am team. You have to remember that these swimmers need the experience if they qualify for Rio.

Every male swimmer selected with the exception of one swimmer will very likely be swimming an individual event at worlds, as these swimmers are all under a FINA ‘A’ cut. The 2nd, 3rd, and 4th placed swimmers in the 200 free would be there only for that relay, so I think that is why they didn’t bother putting together a 4×200 relay.

They’re not all under Fina A (Van Merkerke, Yuri Kisil)
Also Alec Page came 2nd in the 200 Free and could swim 200 fly at worlds

Kisil can’t swim Individual and neither can Van Mereker.

So if they took top four 200 Free swimmers for the relay Page would swim 200 Fly individually because he won it and doesn’t need to meet Fina A.
Then there would be 2 more just relay swimmers for the 4 x 200.

It would have been much easier honouring the natural process and being transparent!!!

Yuri can swim 100 Free. He made the 2 per country standard.

Alec would make sense to me. You have Cochrane, Bagshaw and Conderelli.
It would definitely be the lowest ranked relay which I guess played into the decision.

Kisil swam under the ‘A’ cut in the 100 free in prelims. I realized after I commented that Page can swim the 200 fly individually thanks to his win. But in the past, Cochrane has elected not to swim the relay, rather focusing on his individual events. I do agree with you that it would be great if they fielded a relay anyways, as they have done before, without Cochrane.