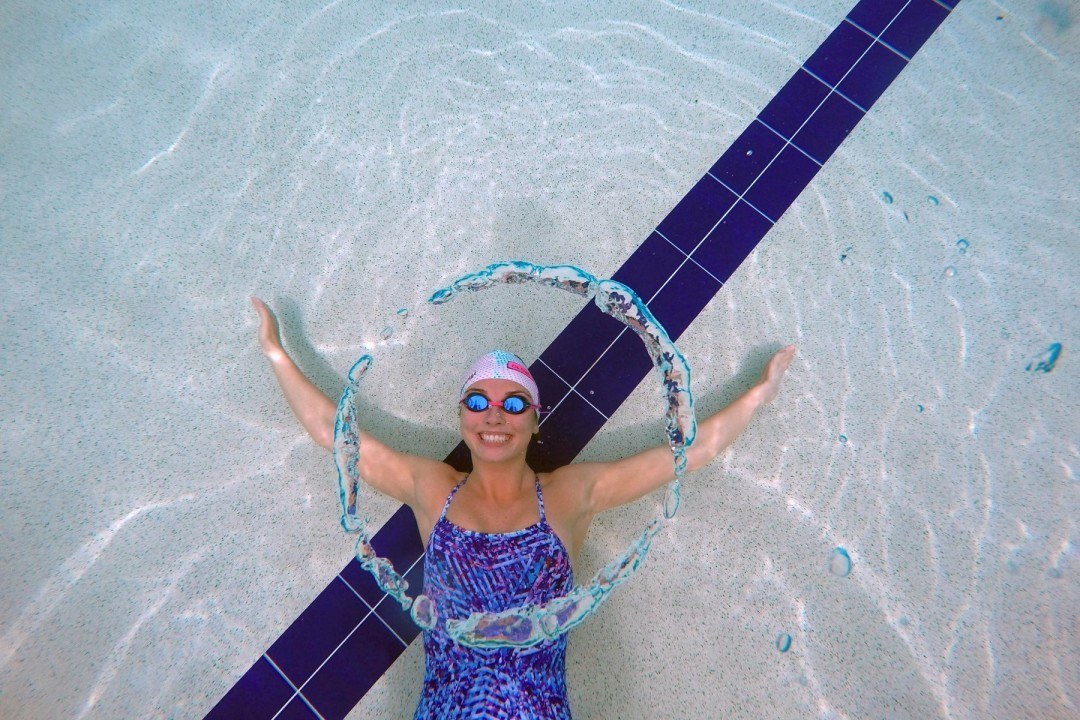 The Australian freshman took the 200 breast, 100 back, and 200 IM in Northwestern's win last night. Archive photo via (courtesy of AMANZI )

NORTHWESTERN VS. ILLINOIS VS. RUTGERS

CHAMPAIGN-URBANA, Ill. — Senior Mary Warren set a pool record in the 50 free and first year Calypso Sheridan picked up four wins as the the Northwestern women’s swimming and diving program opened Big Ten competition with a pair of wins over Illinois and Rutgers in a tri-dual hosted by the Fighting Illini Friday afternoon.

The speedster Warren also picked up another victory in the 50 free, breaking her own pool record with a 23.34. Classmate Anna Keane and sophomore Malorie Han finished tied for fourth in the 50 free in 24.41.

Reigning Big Ten Co-Diver of the Week Olivia Rosendahl continued to shine on the springboard, winning the 3-meter with a 328.80 and finished second in the 1-meter with a score of 280.30.

First-year Sophie Angus continued her strong start to the season with her second victory in the 100 breast stroke and a second-place finish behind Sheridan in the 200 breast.

Sophomore Nicole Aarts also had another strong showing for the ‘Cats, finishing second in the 200 back, touching the wall in 2:05.37.

The Wildcats will be right back in the pool tomorrow morning when they host UIC and the University of Chicago at the Norris Aquatics Center. The tri-dual will being at 10 a.m.

CHAMPAIGN, Ill. – The Fighting Illini women’s swimming and diving team played host to both Rutgers and Northwestern on Friday at the ARC Pool. UI finished with season-best times in four events, including the 400 medley relay, 100 backstroke, 100 butterfly and 200 individual medley. The Illini came up short; however, falling to Rutgers (158-140) and Northwestern (188-110).

“The ladies really stepped up on a more consistent level from beginning to end compared to last week,” coach Elliott McGill said. “We saw a number of swims that were faster than they were against Michigan State. We also saw some girls, who really worked hard all week and who were a little tired, perform very closely to both of these teams, which is okay for where we are at in the season right now.”

Senior Samantha Stratford and sophomore Monica Guyett led the way for the Illini, each winning multiple events on the night. Stratford came away with the top times in both the 100 freestyle (:51.47) and 200 freestyle (1:50.11), while Guyett touched the wall the fastest in the 500 freestyle and 100 freestyle with times of 5:04.31 and 10:22.66, respectively.

In the first event of the night, the 400 medley relay team of McCord, Stratford, Vuong and Curtis got things started, finishing with the fastest time in the event on the season for the Illini (3:49.08). Also earning top times for the team on the season were Michelle McCord in the 100 backstroke (:57.24), Megan Vuong in the 100 butterfly (:56.21) and Stratford in the 200 individual medley (2:02.67)

The Illini will have a quick turnaround, as the team travels to Normal, Illinois, tomorrow for a tri-meet against Illinois State and Southern Illinois. Meet competition is set to begin at 10:30 a.m. CT.

“If we are carrying the same energy and the same mentality that we had today, we will be good for tomorrow,” McGill said. “The ladies will be doing a couple different events than they normally do, so hopefully they are a little bit more fresh and they can pop off some good swims tomorrow.”

“We had stronger performances today than at this point last year, but we do have to take better care of some events and win more of the close races,” said head coach Petra Martin. “We were excited to pull ahead of Illinois, but wanted to be closer to Northwestern. Overall, this is a good gauge on where we are right now and what we need to do better over the next few months.”

Junior Francesca Stoppa and sophomore Federica Greco finished 1-2 in the 200-yard butterfly to claim big points for the Scarlet Knights ahead of eight other swimmers. Stoppa edged her teammate and Italian countrywoman by just over a second with a final time of 2:01.55, which set a new pool record at ARC Pool. In a friendly and tight competition, Greco got her revenge later in the evening by winning the 100-yard butterfly by three-tenths of a second over Stoppa. Greco’s 55.86 set a new season standard in the event for RU.

The Rutgers diving team saw its first action of the season with senior Addison Walkowiak winning 1-meter diving with an NCAA Zone 1 Championships qualifying score of 288.05. That edged the 280.30 points from Northwestern’s Olivia Rosendahl, the reigning national platform diving champion. In a budding rivalry, Rosendahl bested Walkowiak on the 3-meter boards 328.80-311.60 as both qualified for the NCAA Zone 1 Championships with their first and second place scores.

Junior Rachel Byrne was third in both diving events with a 264.15 off the 1-meter and an NCAA Zone 1 Championships qualifying score of 288.65 in the 3-meter event. Freshman Lauren Boone made her collegiate diving debut with fifth place finishes in both events.

Rutgers lowered 2017-18 team time standards in the 400-yard medley relay, where Koprivova (back), senior Larissa Neilan (breast), Greco (fly) and sophomore Clare Lawlor (free) finished second by under a second against Northwestern’s A squad to open the meet. Sophomore Alexandra Fabugais-Inaba also lowered the team’s best 1,000-yard freestyle time of the season with a fourth-place time of 10:36.22, taking 3.6 seconds off her time from the season opener at Florida Gulf Coast.

The 200-yard freestyle team just missed an event win 0.27 seconds behind Northwestern, but the foursome of Lawlor, senior Karli Rymer, sophomore Sarah Davis and sophomore Meghan Moses turned in a season-best time of 1:36.60.

Lawlor scored a pair of close second place finishes in her individual events, touching in at 23.95 in the 50-yard freestyle and 51.86 in the 100. She missed winning both races by an average of a half-second.

The Scarlet Knights swim meet No. 2 of the weekend on Saturday morning at Northwestern in a quad-meet with Illinois-Chicago and Chicago beginning at 11 a.m.

“Tomorrow morning, we will have to bite down and fight,” Martin said. “We will have lots of miles in our legs, but this is great preparation for February and the grueling schedule of a four-day championship meet.”