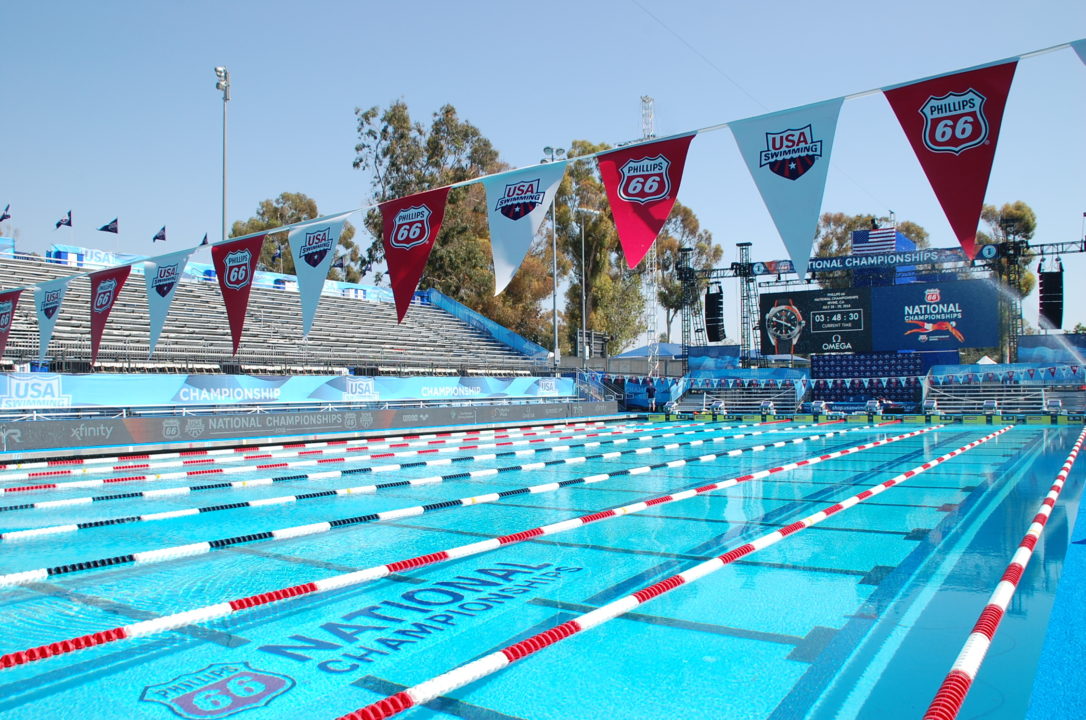 As of January 25th, Governor Gavin Newson has lifted California’s stay-at-home order, which has been in effect since early December 2020. The 4-tier reopening system (that delegates COVID safety restrictions based on each county’s virus conditions) allows inter-team competitions to start up again as long as they follow COVID-19 safety precautions.

Newsom says this decision was based on four-week ICU projections which predict California’s ICU capacities to reach the following numbers by February 21st:

As of January 23rd, the available ICU bed capacity numbers (reported by the LA Times) stood at:

Irvine, located in Orange County, was set to host one of three locations for the January 2021 Pro Swim Series until Southern California became and continued to be one of the country’s largest COVID-19 hotspots. In the last week of December, Orange County reported an average of 3,642 new cases daily (93.3-per-100,00). In response, the statewide stay-at-home order was extended and USA Swimming dropped Irvine as a host site.

The California Department of Public Health has stated that inter-team competitions (between two teams) may resume starting January 25th as long as they follow safety precautions including wearing masks, 6 feet apart physical distancing, and hygiene and equipment sanitation. This status is “subject to change at any given time due to the level of COVID-19 transmission in California.”

The CDPH also stated that exceptions to the rule of the 2-team-only competitions “may be made, with authorization from the local health department, for the following sports where individual competitors from multiple teams are routine: track and field; cross-country; golf; skiing/snowboarding; tennis; and swimming/diving.”

Last week, dozens of “let them play” protests that took place across California in which people called for the state to resume youth sports. Since California’s high school swimming and diving seasons are in the spring, this might allow high schools to have a competition season this year.

SCIAC, which contains 9 of the 11 Division III swimming and diving programs in California, canceled the remainder of their 2020-2021 season in December. However, this may be able to provide opportunities to train safely or compete in small intrasquad meets to the schools that have lost their swimming and diving season if they have open campuses, depending on each school’s athletic department rules.

The stay-at-home order was issued for California counties with ICU bed capacities less than 15%. Now, the 4-tier reopening system that California will abide by is divided into tiers ranging from least serious to most serious virus conditions:

At this stage, freshly out of the stay-at-home order, nearly all counties will start in the widespread (purple) tier with the most safety precautions.

Over the past 14 days, California has seen a 39% decrease in COVID-19 cases according to data reported by the New York Times. Last week the average amount of daily cases was set at 25,576 and on January 24th there were 21,680 new cases reported.

Gavinor Newsom feeling that pressure of that impending referendum! Gotta make the people happy by not destroying their lives/livelihoods i guess.

Ya live and ya learn.

That’s exactly what it is. Boy doesn’t want to get recalled so he’s giving the mommies and daddies what they want despite the low ICU capacity in SoCal.

Spineless politician. I may agree with the move but it doesn’t make him any less spineless.

Honestly, I don’t really understand how SoCal is going to improve 33.3% in 4 weeks. I’m not trying to say it won’t happen but it would be nice if somebody could explain to me what is going to change to warrant such a significant uptick in ICU capacity.

Agree – need at least several months to give the vaccinations time to work; currently with only seniors and health professionals qualifying to receive it, it’s going to be a long slow climb. That said, I do feel that swimming is a relatively lower-risk sport, so I’m happy to see that our high school competition season may be able to take place.

Orange County went from 545 to 445 icu cases in a pretty short period of time and total hospitalizations were 2200+ down to 1600+. I’m not sure about LA county but OC shouldn’t have any trouble meeting that metric. The hospitalization decline trails the decline in new cases which has dropped around 40% in two weeks.

More of the cases were in Anaheim/Santa Ana which tends to be poorer cities in Orange County. In fact, the best news is when Disneyland opens up since lots of people are employed at Disneyland and the hotels in the area.

1.2 million recall signatures and counting will clear your mind 🙂

This decision by him should not stop his recall. In fact, it should embolden it!!

All he did was throw the masses a bone by allowing purple tier sports. Promised an update to the tier system today, but the CDPH didn’t update anything during their press conference. Let Them Play CA has over 50k facebook group members, and most are pissed, as they were hoping for some movement for all sports.

47 other states are allowing most, if not all high school sports to play, and play safely. Not California. Equity? Not in California. Some kids are traveling to Arizona, Utah, Texas and Florida to play sports with their club teams. The kids whose parents can’t afford travel clubs, sit at home.

Before to many crackpots get on here and get political. LA county covid center reported “The curve has flattened, however the COVID-19 pandemic is still in LA County. The coronavirus is still deadly and capable of quickly taking many lives. As L.A. County recovers, all residents, business owners and employees must continue to observe and practice all COVID-19 physical distancing requirements. “. THE CURVE HAS FLATTENED. Keep it up people, I want to play pick-up again!

Newson made it political. No crackpots required.

The curves are flatter due to recalibrated pcr tests

We talking no more false positives for influenza? That would be nice since the flu has all but disappeared this past year.

It makes ya think doesnt it?