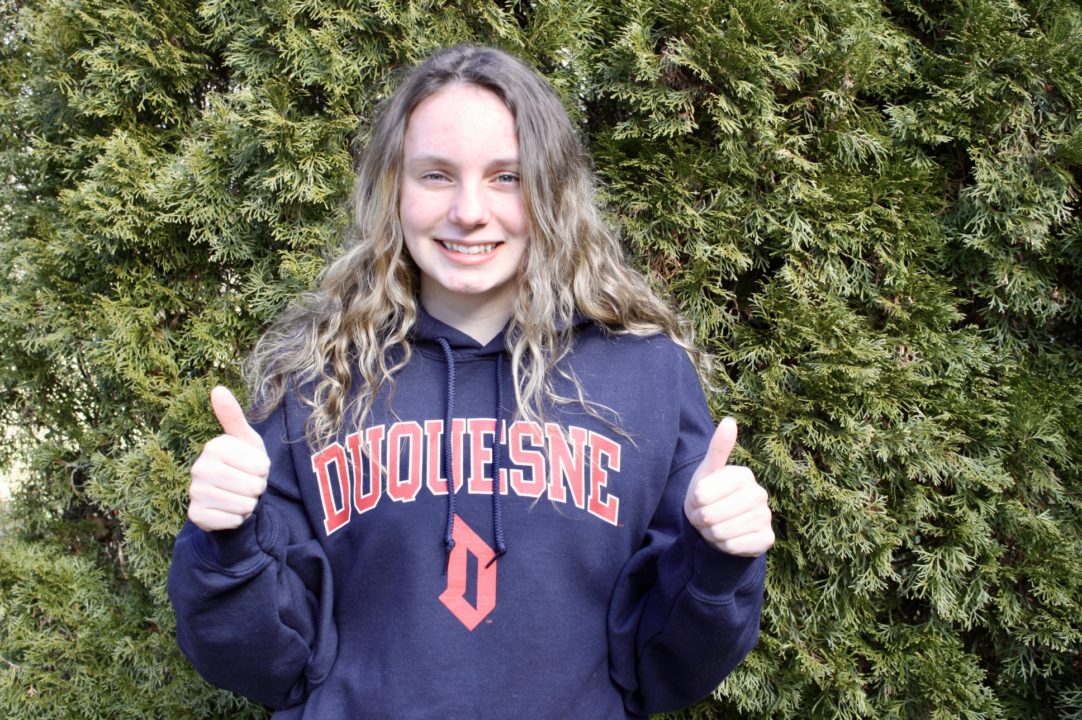 itter and Faster Swim Camps is the proud sponsor of SwimSwam’s College Recruiting Channel and all commitment news. For many, swimming in college is a lifelong dream that is pursued with dedication and determination. Fitter and Faster is proud to honor these athletes and those who supported them on their journey.

Katie Simpson of West Chester, PA has announced her decision to swim for DI Duquesne University beginning in the 2022-2023 season. She is a year-round member of the West Chester Area YMCA swim team, near Philadelphia, and she is a senior at Henderson High School. She is the first announced recruit in Duquesne’s class for the fall of 2022.

I am so excited to give my verbal commitment to continue my athletic and academic career at Duquesne University! Thank you to all my friends, family, and coaches who have helped me get to where I am today. Go Dukes!

In early March of 2020, shortly before coronavirus quarantines began to set in, Simpson competed at the Pennsylvania YMCA East District Championships.

There, she competed in the 100 free and 100 back and 2 relays. She won silver medals in both of her individual events, swimming personal best times in each.

A week later, Simpson represented Henderson High School at the Pennsylvania AAA Girls State Championships, where she made it back in the A-final of the 50 free. She further improved her best time in finals of the 50 free, touching 6th in a time of 23.50. Simpson also swam the 100 free, touching 21st. She led off both Henderson’s 200 and 400 free relays, going a 23.79 for the 50 free and 52.10 for the 100. The relays touched 7th and 6th, respectively.

Duquesne University finished 3rd at the 2020 Atlantic 10 Conference Championships behind George Washington University and Fordham University. The team was led in individual points by Hanna Everhart who won gold in the 50 and 200 free. Simpson would have qualified for the A-final of the 50 free at the conference meet.

Simpson’s times would have ranked her as one of the team’s top sprinters during the 2019-2020 season, and she should slide immediately on to the Dukes’ championship. Her 50 free would have made her the Dukes’ second-fastest swimmer behind Everhart, and her 100 free would have been ranked 4th.

Simpson is the first announced recruit for the Dukes’ class of 2026.