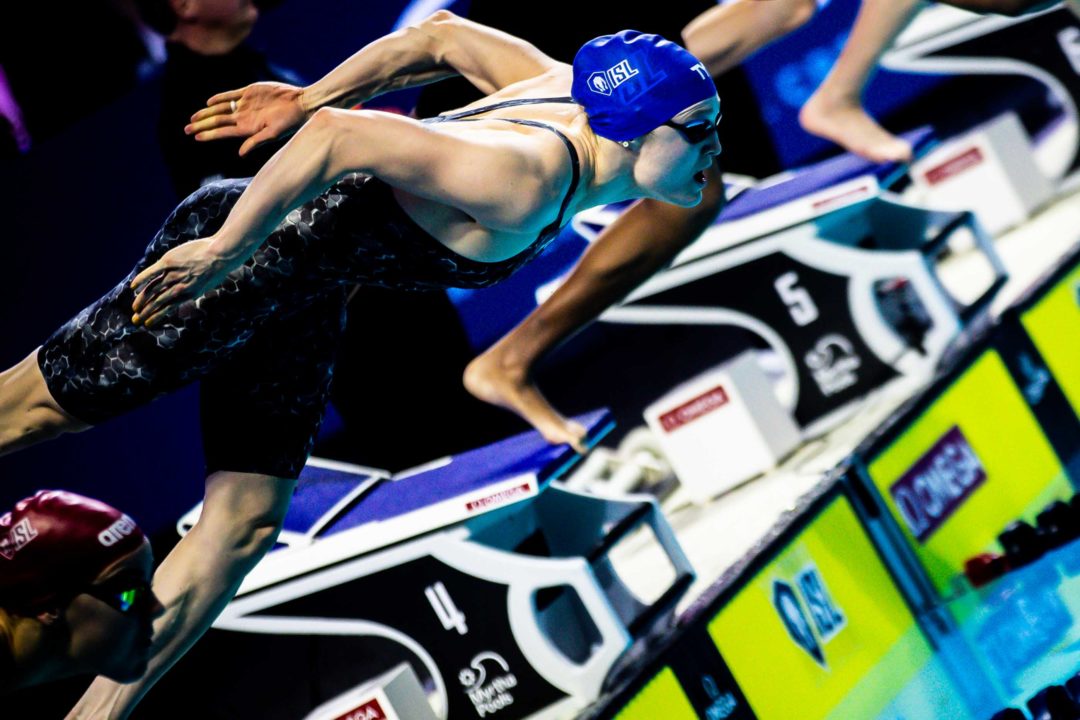 The 2020 ISL champion Cali Condors have released their first five retained swimmers - but league MVP Caeleb Dressel is not among them. Archive photo via Jack Spitser/Spitser Photography

This is the first year of the retention process, so we don’t really have a blueprint for how teams will structure their picks. Each team will ultimately retain up to 15 athletes before the first round of the draft, then fans can vote one more swimmer back onto the team.

But an absence from the team’s announcement of retained swimmers could also suggest that an athlete has withdrawn from the league next season or is planning a break from competition following this summer’s Olympics.

That list is as notable for who is missing as for who is on it. None of Cali’s top four scorers in regular-season points are a part of the first five being retained. That includes #1 overall scorer Dressel, #4 scorer Lilly King (who went nearly two seasons without losing a breaststroke race in the ISL), #5 scorer Olivia Smoliga (a co-captain with Dressel in 2019 and 2020) and #13 scorer Hali Flickinger. Each of those four swimmers scored 146+ individual points, including 277 from Dressel and 228 from King.

They retain Dressel with there last pick for dramatic effect.

Confused about the rounds of retention. If every team is retaining 16 athletes before the draft, is it just a matter of spreading our news? Could they be saving the Dressel retention for the last one to generate buzz?

Idk about everyone else but this format is quite honestly the dumbest thing I’ve seen in swimming in a while and we just went through a week of rowdy nonsense.

Stop making it the Dressel show. He is only one of the many talented swimmers who choose to swim in the ISL.

I’m not really clear on why there are 5 rounds of pre-selection/retention…why not just 1 round of retention (with 15 swimmers announced), 1 round of fan vote, and then the draft. This seems like a half-baked idea to create more ISL exposure by giving 5 potential press releases before the actual draft, but seems to miss the mark in that swimming fans are going to recognize this doesn’t mean much, and more casual fans are going to be confused and likely not keep interest until the actual draft. Is there something I’m missing?

We’ve been trying to ask for weeks how/when/where these would be announced, and basically woke up to “surprise! We’re just going to trickle them out one at a time this morning on IG.”

It’s not good. It really isn’t.

I like to idea of following a team. I was rooting for Cali the last two seasons because I like their colors and will always have a soft spot for Lezak, so I’ll probably pull for them regardless to who is on the team at the end of the day.

But yeah, this feels like they’re imagining there is going to be interest in this like college signing day or draft days where people take off work for the event. There won’t be. And it creates a headache/nightmare for the most ardent fans to follow whether you’re following it from a team or individual standpoint. How is someone not initiated in the swim cult supposed to keep up? Seems like… Read more »

I think people COULD care about who is on what team…but so far that system hasn’t been set up. For people to care WHO is on what team there needs to be things like:

good points! all the things ISL and swim fans need to learn, and learn fast 🙂

personally, I am still borderline rooting for favorite swimmers and a team in general…. right now, I assume ISL believe they need star swimmer power to draw attention as there isn’t enough team name recognition yet.

I also agree that 5 rounds of announcement is overkill especially if they don’t even care to coordinate the announcement with established media, especially the sport specific media.

While I found watching the ISL last year compelling, fun, and brought new interest to swimming, I can’t understand if fans are meant to primarily follow teams or individual swimmers. Dressel, King and all the other stars are great to watch, no matter who they swim for, and I don’t particularly care which team wins, or who is on which team. The fact that swimmers get paid based on their individual results seems to reinforce that the focus is primarily on individuals, not on teams. But this draft/retention policy seems to redraw the focus on teams, not swimmers.

Have the swimmers been paid for last season yet??

3
0
Reply
NOT the frontman of Metallica

To make this League more interesting they need big moves on big names like in other pro leagues. I want to read about the big bomb when DC trident signs Dressel and stuff like that!
16 retained swimmers from each team since last season won’t create much drama/excitement…

15
0
Reply
ALDASP
Reply to  NOT the frontman of Metallica

speaking facts. Or if, imagine, a blockbuster trade happened in front of our faces that blow up Twitter and the SwimSwam comments?

6
0
Reply
NOT the frontman of Metallica
Reply to  ALDASP

14
0
Reply
boknows34
Reply to  NOT the frontman of Metallica

Dress trade request or he sits out the season. 🙂

These retained swimmer are all missing the OG this summer if i’m correct, that’s what I love about ISL. USA has huge talents besides its olympic team

It is crazy to think Olympic athletes want to get right back into swimming and not take a break! I think for the long term health of the athletes, the ISL is doing harm in asking them to swim and compete this soon after the Games!
I don’t think there will be much interest (or should be) in ISL this year. Most super stars will bypass the whole thing! And good for them!

Hey, it’s only 3 years to the non-asterisk Games, so usual lolly-gagging for a year or two after the Olympics are not in play. Plus, they’re theoretically getting paid. Also, way too many exclamation points.

You think Dressel cares about $15k Or any of the stars? Covid shutdown a year out didn’t affect these stars so taking a sanity and physical break 3 years out is not going to hurt!

at the same time, for swimming to get out of attention-only-in-Olympics, ISL /regular season is needed. Even though not all stars will swim but I hope it is still going to be an exciting season. Without swimming at Olympics, some of the swimmers may swim some fast time.

it will have a different kind of drama to not have all the stars in the regular season/matches (team depth), and bust out the stars for semi and final for team title.