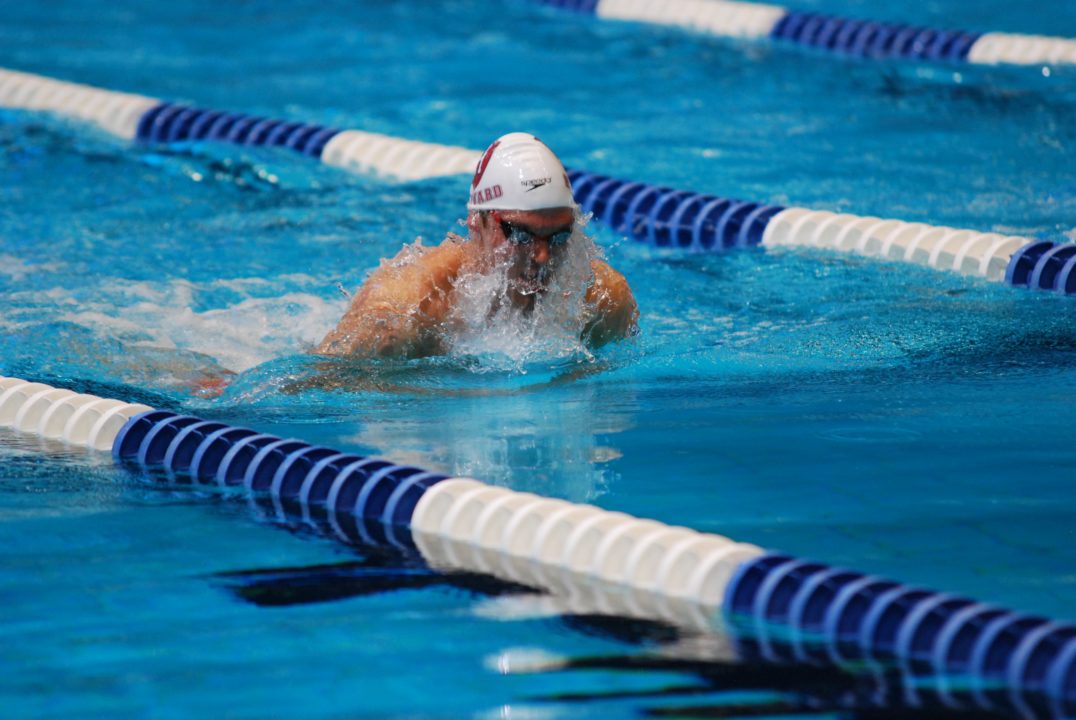 Chuck Katis swam his first meet as a Golden Bear on Friday, and walked away with a win in the 200 breaststroke.

It’s been two-and-a-half months, dating back to the first week of November, since the Cal Golden Bears last had a dual meet. But on Friday, in front of a live West Coast audience on the Pac 12 Networks, both the men and women of Berkeley swept their Arizona State counterparts.

The final women’s score was a rousing 229-69 (no exhibitions in place for this meet – perhaps a savior for the television audience), with the Cal men topping the Sun Devils 178-113.

Both the Cal women (#1) and Arizona State women (#24) were ranked in our mid-season top 25, but in relative terms, the depth of the Cal women made them lopsided favorites in this meet, as compared to Arizona State who at NCAA’s will rely on a few individual scorers for most of their points.

In these televised meets, the 1000 free is swum at the beginning of the competition to help the television format, so the Sun Devils actually struck first blood. Senior, and U.S. National Team swimmer, Tristin Baxter took the event in 9:55.56; she and Celina Li were in a battle for the first 900 yards of this race, but in the last four lengths, it was the open water specialist Baxter who put on the afterburners (she closed in a 27.73) while Li faded (she closed in 31.52).

That would be the last swimming event that Arizona St. would win at the meet, however, as the Golden Bears rolled.

Both Tran and Osman are really coming around in the last couple of meets, with the bounce beginning at Winter Nationals.

Led again by Tran, the Cal women took 1-5 (including exhibitioned swimmers) in the 100 fly as well. This time, Tran won in 54.97, besting an impressive internal competition that included Olympian Rachel Bootsma (55.40), near-Olympian Sophia Batchelor (55.40), and the Olympian Osman (55.66).

Another Olympian, on this rings-filled Cal team, Missy Franklin took home three individual wins to add to a remarkable freshman season. She began her night by winning the 200 free in 1:47.07, two seconds better than teammate Caroline Piehl (1:49.43). She then moved on to the 200 backstroke, another two-second victory, with a 1:57.86.

Though a swimmer as versatile as Franklin has a lot of options for event entries at NCAA’s, it’s looking more-and-more like those might be her three individuals for NCAA’s.

Arizona State did wind up with two more wins from their women; specifically, on the diving boards. Arizona St. only traveled one, but that one took a sweep of the events. Hailey Casper won both the 1-meter (307.50) and 3-meter (335.03) against a sleuth of Bears.

Editor’s note: a group of bears is known as a “sloth” or a “sleuth.” We chose “sleuth,” as we thought it would be less confusing.

The men’s meet was not quite as lopsided in the final score, though the Cal men slid in a few more exhibitions of non-winning swimmers.

The big news from the men’s side was the Cal debut of Chuck Katis. The junior is in his first semester after a transfer from Harvard, where he’s the school record holder in both breaststroke events, and might be the missing piece that the Cal men need to make a run at the NCAA title.

Katis proved his value by winning the 200 yard breast in 2:00.19 in one of three swims on the day. He was also immediately inserted into Cal’s winning 200 medley relay, where along with Tony Cox, Marcin Tarczynski, and Seth Stubblefield, he was part of a winning time of 1:27.20 that included a 19.52 Stubblefield anchor.

On that medley, Katis split 24.51, which was the fastest split of the field. Cal has struggled with what to do on that 200 medley, as their breaststrokers all tend to be better in the longer distances.

For Arizona State, the top swimmer of the night was butterflier Alex Coci. He started his individual swims with a rousing 1:47.92 in his best event, the 200 fly. The only swimmer close to him was Cal junior Dane Stassi, but Stassi would ultimately be DQ’ed after just touching the wall first in 1:47.87. Stassi flinched on the start.

Cal star freshman Ryan Murphy won the 200 free in 1:37.51, beating teammates Will Hamilton (1:38.18) and Tyler Messerschmidt (1:38.72). Murphy then turned around and won the 100 free running away in 44.27 – though that race didn’t include Cal’s top two sprinters. In addition to his backstroking, Murphy continues to have a big impact on his team’s freestyle group as well this season.

In the other men’s sprint event, Seth Stubblefield, who is one of Cal’s top sprinters, won in 20.00.

Josh Prenot won the 100 breast in 55.47, just getting his fingertips on the wall ahead of Arizona State sophomore Thibault Capitaine: the Sun Devils performed very well on Friday in the 100 yard races.

Braden wrote “Though a swimmer as versatile as Franklin has a lot of options for event entries at NCAA’s, it’s looking more-and-more like those might be her three individuals for NCAA’s” Good point – but much as I love seeing the WR holder dominate this race in long course, I feel Franklin may better serve her team by taking on the 100 free at NCAAs over the 200 back. Racing the 100 free where she has a decent chance of winning will help push the UGA & Stanford freestylers down in the scoring, whereas AR holder Pelton can probably take the 200 back title again. Even without Missy in her signature event, Cal already has sufficient scoring depth there with… Read more »

This has to be the least newsworthy item swimswam has posted. Cal beat ASU? Well, duh.

Grab your broomsticks, cause I call shenanigans. This story isn’t about Cal beating ASU, just look at the headline. It’s about the ascendance of the Magic Man. Fitting that he is a breaststroker. Now you see him, now you don’t.

I wouldn’t be surprised to see Missy swim only freestyle on individual at the next NCAA championships. Since she’s at Cal, it looks like she works much more her freestyle than her backstroke. And she swims much more freestyle than backstroke in the college meets. I’m not a college specialist but from a team perspective, I think like Swimphile. She would win the 500 free on day 1 (around 4.32), the 200 free on day 2 (with a new American record) and the 100 free on day 3 (in 46.94). Miss Pelton will take care of the 200 back with an easy win and a new American record. Yes, it would be weird to not see Missy, the best backstroker… Read more »

what do we think Pelton’s day 2 event will be?

what do you think?

Pelton would finish second behind Missy in the 200 free.
If they are at their best, Bootsma and Tran are faster in the 100 back.
Good luck to coach McKeever. 🙂