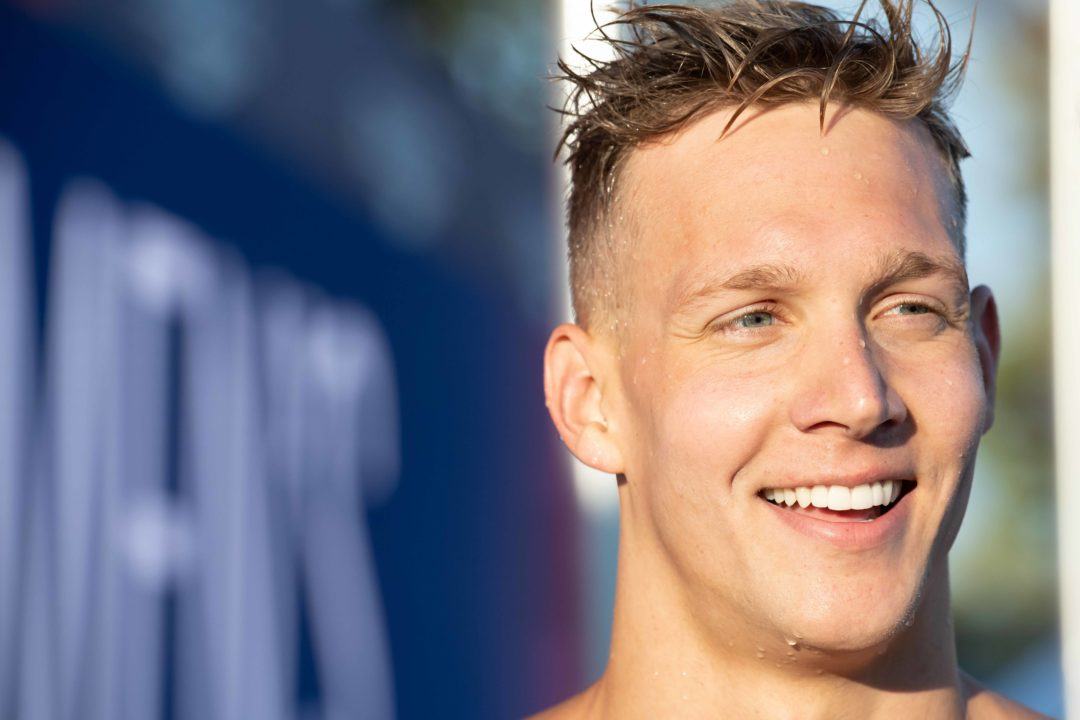 The Gator Swim Club, both post-grads and high school students, took a trip up to the Cecil Aquatics Center in Jacksonville, Florida on Saturday for a special Gator Swim Club distance meet which had only 3 events: the 400 IM, the 500 free, and the 1650 free.

Dressel, who showed an unbelievable event range in college (he at different points in his career had the fastest-ever times in the 50 free, 100 free, 100 fly, 100 breast, and 200 IM in yards), always alights imaginations with what he might be capable of in events he didn’t swim while at Florida. On Saturday, we got a taste of his capabilities when swam an event that was unusual even for his varied lineup: the 400 IM. He finished 2nd in the race in 3:48.84 – about 3 seconds behind Mark Szaranek. The Scottish-born Szaranek took silver int he long course 400 IM at last year’s Commonwealth Games.

Other highlights of the meet:

It was a great meet for the little ones too! Swimming next to the Olympians and the International team motivates them so much! Thank you to Caeleb for making my daughters day with a pic on the deck! GO GSC!

Wow some of these comments are wayyy to sinical. He is just mixing it up a little in an early season meet. But even if he is still training some aerobic IM is that really a bad thing? He is versatile and could potentially do well in other events besides the 50,100 free and 100 fly. Also think about it this way. Dressel is a rare talent who could potentially be swimming competitively in the sprint events for another 8+ years. Why not continue with some aerobic base training now. Because I guarantee when he’s 30 he will be focusing more as more on sprint events. Nothing wrong with changing up your lineup/training methods while you still can. Keeps the… Read more »

He went fast in the 50 free in college despite going to Florida and occasionally swimming breaststroke for him. I’ll assume they have their priorities in order and that they’re not trying to turn him into a 400 IMer.

I do hope he’s still getting plenty of time with Jungbluth, though, since he was Dressel’s primary coach through college and obviously worked wonders. I know that with Troy focusing on the pro group nowadays, his training might have changed just a bit. We’ll see what happens, though. I’m sure they’ll make any adjustments that need to be made this summer before the leadup to Tokyo.

It’s a distance meet. It’s in the name. It isn’t his World Champs or Olympic Trials lineup….

Caeleb you are a pro stop swimming yards!

He needs to do more SCM meets/training. Make some $$ on the world cup next fall

Would love to see him get set into SCM

15
-5
Reply
Caeleb Dressel’s Bandana
Reply to  How much can CD bench???

Dressel should never touch any other event than the 50 free, 100 free, and 100 fly at Olympic Trials.

Agreed that he should stick with his lineup but he has a decent 2free so it wouldn’t be surprising if he got on the relay.

No. He will not be adding the 200 free. He’s too busy for that 88 free relay. Someone else needs to step up.

Oh….clearly an “axe to grind” against Caeleb. In reality, just a reality check.

I like this. At this time of year nothing wrong with this even if you are more of a 100/50 guy.

Exactly. Even Michael Phelps experimented with events that he didn’t specialize in, like in 2005 when he attempted the 400m freestle at the World Championships. Didn’t make the final, but he swam it.

He did swim the 50m butterfly in a smaller event once. Didn’t win it, but he swam it.