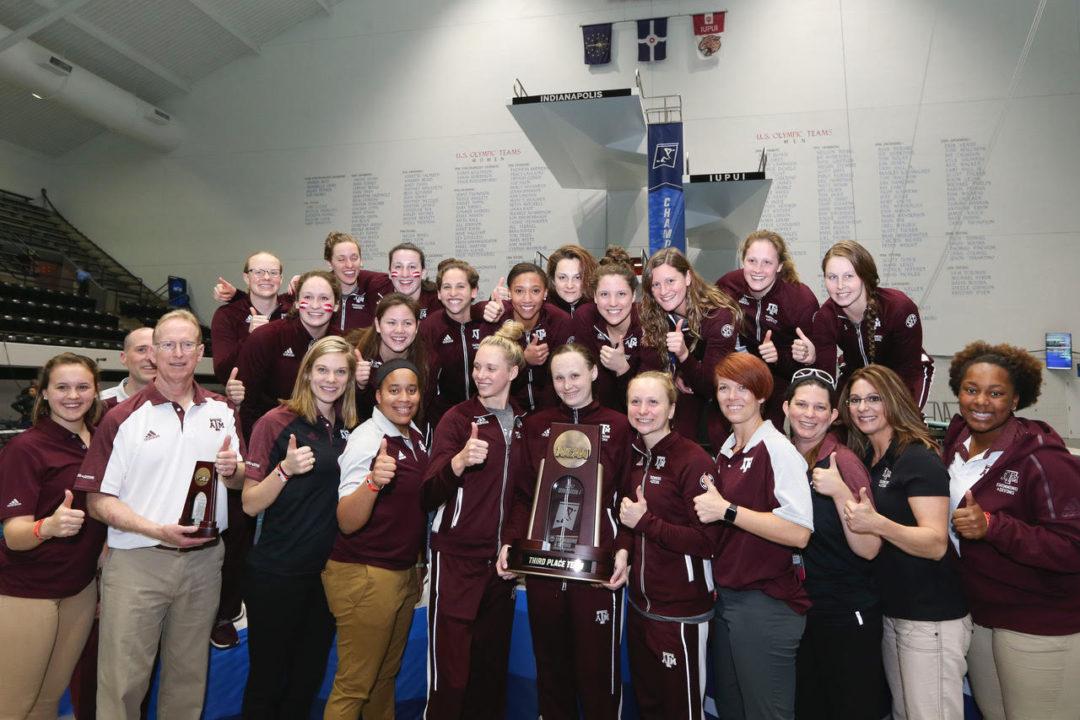 Coming on the heels of their 4th-straight SEC Conference Championship, the Texas A&M Aggie women’s team is this week’s BSN Sports Swim Team of the Week.

The Aggies are led by head coach Steve Bultman, who has been with Texas A&M for two decades. During Bultmann’s time at College Station, the Aggies have never finished lower than 2nd at the SEC championships and have racked up numerous top-ten finishes at the NCAA Championionships.

Under Bultman’s watch, the Aggies’ success has extended to the international stage. Numerous Texas A&M women have represented their school and country at the Olympics, including Cammile Adams, Alia Atkinson, Amini Fonua, Beryl Gastaldello, and Sydney Pickrem at the 2016 Rio Olympics.

BSN Brand Ambassador Jessica Hardy recently spoke with Coach Bultman to get his take on what’s made the team so successful over the past 20 years, as well as some of his thoughts on coaching in general.

During their discussion, Bultman emphasized the importance of getting and giving feedback to/from the swimmers, as well as focusing on technique and kicking. But the mental side of the game is also important to Bultman, “people perform better when they’re relaxed and having fun, so I try to incorporate that all as well.”

Another part of that mental aspect is the team chemistry. Bultman feels that’s something else that the swimmers have bough in to, and it’s paid off in the team’s results.

The girls care about each other; it’s not my team or [associate head coach Tanica Jamison‘s] and my team, it’s our team. We try and get that across to them and that really works.

The Aggies may be one of the quietest powerhouses in college swimming, something that Bultman noted when asked about some of his struggles in coaching.

Some recruits overlook us. As successful as we’ve been, as much as we help people improve, there’s still some recruits that don’t give us as good of look as we’d like them to. The girls that want to come here, we’re gonna help them get better.

Bultman’s coaching career extends well past his time with the Aggies. In the years prior to coming to College Station, Bultman coached at over half a dozen other college or club teams, and in his time on the deck, he’s racked up quite a few memories. Asked about his favorite one, Bultman responded,

Wow. I don’t know if I can do just one. Probably the first time back in 1988 when I had three swimmers make the US Olympic team, and two of them were still in high school. Winning conference and then the making the 2012 staff with two more US swimmers is up there as well.

In the end, swimming is much more than about times or championships, but it’s about making a difference in the lives of student-athletes, and Bultman wants to see his swimmers become leaders, in and out of the pool.

We don’t want to just spoon feed them, we want to empower them and make them realize how they ultimately perform is in their hands. They have to do it. We’re going to help them but they are the ones who have to decide on their goals, how hard they’re going to work, and the effort they’re going to put in. We just show them that we believe and that they’re capable of doing those things.

The Aggies make the two hour trek to Austin next week, where they’ll be shooting for their third-straight top 3 finish, and seventh-straight top 4 finish.