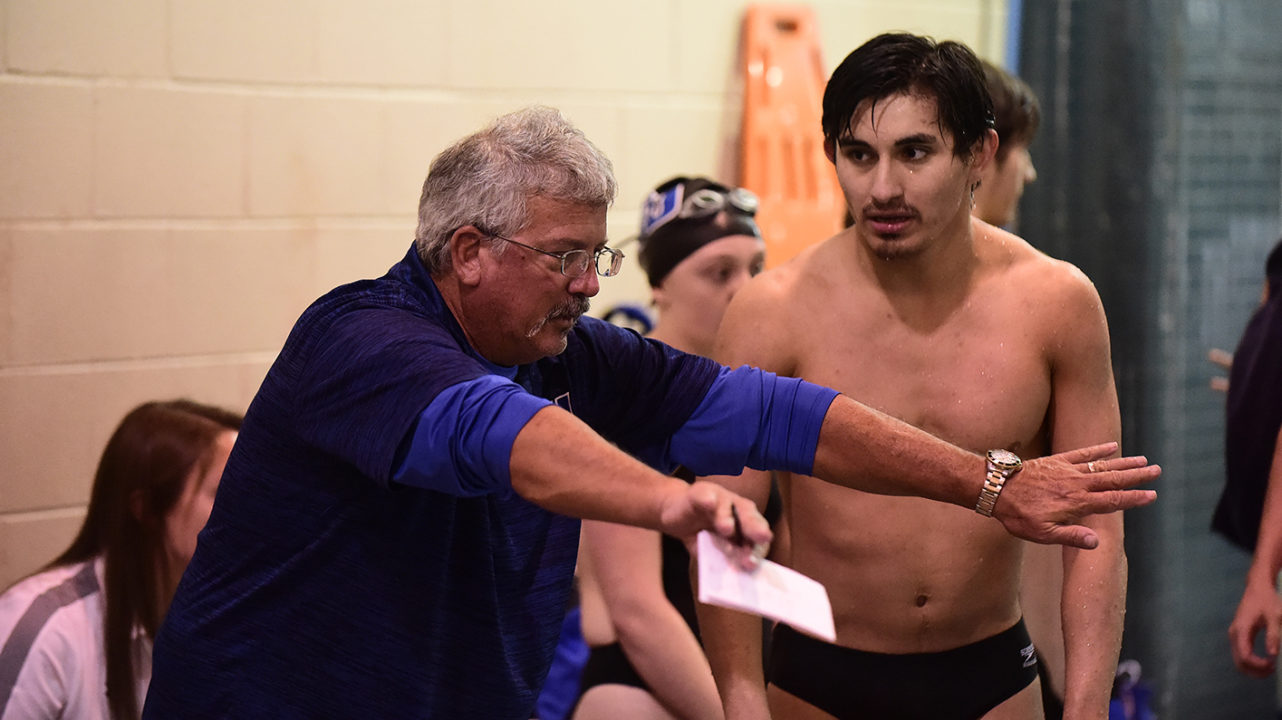 Marymount University Men's and Women's Swimming Head Coach Mike Clark has announced his retirement from the program, ending the second-longest tenure for a coach for Marymount athletics. Current photo via Marymount Athletics

According to school president Charlie McCormick, Schreiner University plans on adding both a football and women’s swimming program.

Gurka, in his 47th year in Wayne, now owns 800 combined career wins between the Pioneers’ men’s and women’s squads.

ARLINGTON, Va. – Marymount University Men’s and Women’s Swimming Head Coach Mike Clark has announced his retirement from the program, ending the second-longest tenure for a coach for Marymount athletics.

Clark has spent the past 28 years at the helm of the men’s and women’s swimming programs, leading the teams through a 27-season run in the Capital Athletic Conference and the first year of Atlantic East Conference competition.

“He will be missed and is without a doubt leaving a legacy in all he has done for Marymount,” Marymount Director of Athletics Jamie Reynolds said. “It’s hard to fathom the number of lives Mike has impacted throughout his career here. He has been involved in the swimming careers for people at all stages of life.”

He came to Marymount in the 1990-91 season, looking to get back into the collegiate coaching ranks. Clark had a decorated career as a swimmer at James Madison University, being a three-time Most Valuable Swimmer award winner in consecutive seasons and the program-record holder in multiple events, before spending two season as a JMU assistant coach.

“I was coaching a club team in Northern Virginia, but after having a great NCAA experience, I knew I wanted to coach at the college level,” Clark said.  “I saw the job advertised and brought my resume over to Bill Finney, the Athletic Director at the time. I think he liked that I was local and that I had walked it into his office.”

After two seasons with the Marymount swimming programs, Clark found the foundation of his career as a Saint.

“When we renovated the building and built the new pool, I could start to realize some of the goals I had as far as learn to swim programs, club teams, master’s teams,” Clark added. “By being able to host a first steps to last steps swim program, we served not just our college but our community needs, as well.”

Clark spent the next 27 seasons building the Marymount swimming programs with the goal to become one of the top programs in the CAC. Over that time, he would become the winningest coach in the CAC with 140 career wins, a record which still stands today. With 85 wins on the men’s side, he currently holds the fourth-most wins in the conference.

“We always set our goals to go to the CAC Championships and do as well as possible,” Clark said. “It was always fun to have that end of the year, kind of, celebration, with everyone getting together at one swim meet and swimming as fast as they could. Over 27 years, it was a real big part of our season play to get there and do was well as we could.”

On the national level, Clark has coached one Collegiate Swimming and Diving Coaches’ Association of American All-American honorable mention in 2011 (Anna Macedonia, 100 backstroke).

“My biggest goal for the athletes was to learn to compete at the highest level you can. My expectations every year are we are going to do best times and in doing so, we are going to set school records and move up the top ten list.  Doing best times is what we do,” Clark said. “Learn to set goals, learn to assign tasks to those goals, and learn to perform the hard work necessary to achieve those goals. Those are the skills they will use in the real world.”

While Clark has held the reigns to the Marymount swimming programs, he has seen every school record set on both the men’s and women’s sides. Both teams have finishes as high as second in the conference for both the CAC and the Atlantic East, as well.

On top of so many successes for individual swimmers and the collective teams, Clark found success in helping student-athletes grow and achieve their goals no matter where their starting point in competitive swimming.

“When you have someone who doesn’t have a lot of experience, improvement is natural,” Clark stated. “It is pretty rewarding to watch them go from not having experience to becoming a contributor and being competitive. It is a very courageous thing to do to jump into a sport that you have no experience in and to stick with it to see the success that comes from it.”

In his final season leading the men’s and women’s teams, Clark has guided the program in its beginning as a member of the Atlantic East. The season has culminated in both teams taking second place in the Atlantic East Championships, while 33 women and 30 men were named to all-conference teams. Clark was also honored as the women’s Coach of the Year, while coaching the league’s women’s Swimmer of the Year (Hayley Elizondo).

“It has been a great 28 years,” Clark said. “We were able to take a Division III program and make a pretty good living out of it. I feel pretty good about what we did here.”

Clark is a fan of the water even when he is not at Marymount and the Lee Center Pool, with hobbies including boating and fishing. Those hobbies led to him being in the right place at the right time, as he saved a woman from drowning in 2015, using his over-30 years of lifeguarding experience. After the woman fell off of a boat dock, Clark’s attention was drawn to her in the water, when he jumped in after her.

As he moves forward from his career at Marymount, Clark plans to continue to be on and around the water. He will continue to grow his club swim team, work with his foundation to help underprivileged children gain financial support to pursue competitive swimming, run his charter fishing and yacht delivery business, and make trips to his property in Key West for some down time.

“We are going to have fun. My wife has supported me all these years, so I’ve thrown out to her that whatever she wants to do, I’m there to support it,” Clark said. “I’m going to have fun doing the things that I truly enjoy doing, which is being on the water, fishing, boating, scuba diving, surfing, and getting back to the beach lifestyle.”

“We wish him the best in his new adventures and thank both Mike and his wife, Theresa, for all they have given over the last 28 years,” Reynolds added. “I hope they never forget – Once a Saint, Always a Saint!”